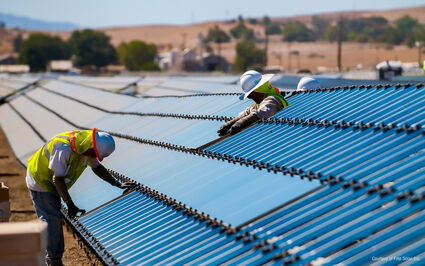 Amongst the rarest of the stable elements on the periodic table and an important ingredient in the emerging thin-film solar panel sector, tellurium embodies what it means to be a metalloid – an element that possesses the properties of both a metal and non-metal – critical to the United States.

"Most rocks contain an average of about 3 parts per billion tellurium, making it rarer than the rare earth elements and eight times less abundant than gold," the United States Geological Survey wrote in a 2015 report on tellurium. "Grains of native tellurium appear in rocks as a brittle, silvery-white material, but tellurium more commonly occurs in telluride minerals that include varied quantities of gold, silver, or platinum."

Because it is so uncommon and typically recovered as byproduct of its more abundant neighbors on the periodic table, very little of this element that possesses the properties of both a metal and non-metal is produced. During 2019, about 470 metric tons of tellurium was recovered as a byproduct of refining copper concentrates, with about 62% being produced in China.

Though this scarce metalloid is seldom found in economic concentrations, the enormous Pebble copper-gold-molybdenum deposit in Southwest Alaska hosts "an enormous tellurium endowment" that could provide a future source of this solar panel ingredient.

Traditionally, the small amounts of tellurium produced globally was used as an additive to improve the strength and pliability of steel, copper, and lead alloys. This has changed with the advent of the cadmium telluride (CdTe) thin-film solar panels.

While the solar market continues to be dominated by the traditional silicon solar panels, CdTe panels are becoming increasing popular. This is due to the fact that these thin-film panels can absorb sunlight close to the optimal wavelength for converting to electricity and they are relatively inexpensive to make.

Despite their sunlight absorption abilities, CdTe thin-film cells are less efficient than their silicon counterparts. The low production costs, however, often overcome this disadvantage and CdTe have been the panel of choice in some of the largest solar farms in the U.S.

USGS estimates about 40% of the tellurium consumed in the U.S. during 2019 was used to make CdTe photovoltaic cells, the balance was primarily used in thermoelectric devices for cooling and energy generation; in alloys; and as a vulcanizing agent and accelerator in the processing of rubber.

"CdTe solar cells are the second most common photovoltaic technology in the world marketplace after crystalline silicon, currently representing 5% of the world market," according to the U.S. Department of Energy. "CdTe thin-film solar cells can be manufactured quickly and inexpensively, providing a lower-cost alternative to conventional silicon-based technologies."

While U.S. tellurium production data is proprietary, the metalloid is produced as a byproduct at a copper refinery in Texas. It is estimated that this refinery produces roughly 60 metric tons of the solar panel ingredient each year.

In fact, nearly all tellurium currently produced comes from copper refining and the USGS said this helps to reduce the geopolitical risks of sourcing this solar metalloid.

A mine developed at the Pebble deposit in Southwest Alaska could provide a globally significant supply of tellurium.

While there has never been an official calculation of how much tellurium is contained within the Pebble deposit, there are indications that it is sizable. Work completed in 2013 estimates that 2.5 to 3% of the more than 100 million ounces of gold that has been identified so far at Pebble is hosted in telluride minerals. This gold carrying telluride, in turn is hooked to chalcopyrite, which is the main copper ore mineral at the Pebble deposit.

"The majority of what is conjectured to be an enormous tellurium endowment at the Pebble deposit is potentially hosted in the structure of chalcopyrite and pyrite," USGS wrote in a 2018 report on minerals critical to the United States.

As such, whatever facility refines the copper concentrates from a future mine at Pebble could likely also produce tellurium, if the economics and metallurgy allow. 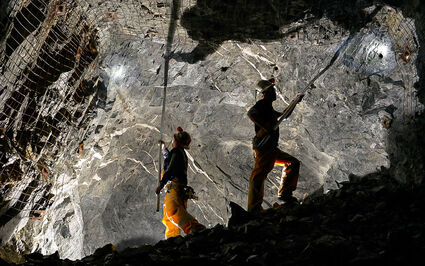 High-grade orogenic gold deposits such as those at the Kensington Mine in Alaska contain abundant telluride.

High-grade orogenic gold deposits in Southcentral and Southeast Alaska, such as those found in the Willow Creek District north of Anchorage and Kensington Mine north of Juneau, however, contain abundant telluride minerals.

Tellurium, though, is seldom considered an economic byproduct from this type of mine globally and only two mines on the planet produce this critical metalloid as a primary commodity.