Tough tungsten at high supply risk in US 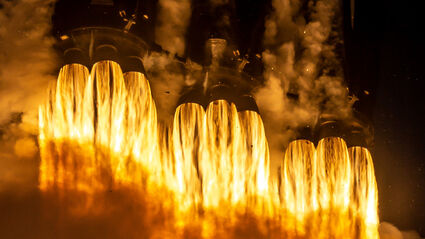 Extremely hard and with the highest melting point of all the elements, tungsten is often used in rocket engine nozzles.

America's supply of tungsten, an extremely durable metal that is vital to a broad range of American industrial sectors, is at high-risk.

A recent U.S. Geological Survey assessment to identify which mineral commodities are most at risk to supply disruptions ranked tungsten near the top of the list – alongside rare earth elements, cobalt and graphite, platinum group metals and tungsten.

Like many of its neighbors at the top of the mineral commodity supply risk list, much of the potential for supply disruptions has to do with China's near monopoly on mining this tough metal.

"World tungsten supply was dominated by production in China and exports from China," USGS penned in its 2020 Mineral Commodity Summaries.

According to this annual report, China accounted for more than 80% of the 85,000 metric tons of mined tungsten produced globally during 2019.

This provides the Middle Kingdom with a strong hand when it comes to controlling pricing and global supply, something the country has been known to use to maintain and strengthen its control over metals supply.

"China's government regulated its tungsten industry by limiting the number of mining and export licenses, imposing quotas on concentrate production, and placing constraints on mining and processing," according to the USGS.

Despite being dependent on China and other countries for much of its tungsten supply, the U.S. has significant unmined tungsten resources. Much of these resources are found in Alaska, a state that has previously provided a domestic supply of the tungsten minerals wolframite and scheelite in times of need.

Extremely hard and with the highest melting point of all the elements on the periodic table, tungsten is vital to a broad spectrum of commercial and military applications, yet there are no American mines producing this durable metal. Instead, the U.S. depends on recycling and imports to meet its tungsten needs.

As a stopgap, the U.S. government has also been supplementing American tungsten supply out of its stockpiles. According to USGS data, roughly 3,390 metric tons of tungsten has been sold out of government stockpiles since 2017.

Nearly 60% of the tungsten consumed in the U.S. during 2019 was used to make the cemented tungsten-carbide, a compound of roughly equal parts tungsten and carbon.

Because it retains its strength at high temperatures, elemental tungsten is also used in many high-temperature applications. Heating elements, lightbulb filaments, rocket engine nozzles and TIG (tungsten inert gas) welding are among the many applications that take advantage of tungsten's ability to hold up to heat.

Over the ensuing three years, Stepovich and his crew dug more than 2,000 feet of underground workings and produced 300 tons (600,000 pounds) of high-grade tungsten ore averaging 8% tungsten and 10 tons of concentrates that averaged about 65% tungsten trioxide.

Stepovich's discovery, however, sparked interest in the region's tungsten potential.

"The scheelite deposits of the Fairbanks district are believed to be much more extensive than the surface outcrops show and to give promise of a large future production of tungsten," the USGS wrote in its 1917 Mining in the Fairbanks District report.

All of Cleary Hill Mines' World War II production was sold to the Metals Reserve Company, a subsidiary of the federal government-backed Reconstruction Finance Corp. in Washington D.C.

While the Fairbanks Mining District is a past producer of tungsten, it is not the only area of Alaska's Interior region where this critical hard metal can be found.

About 70 miles north of Fairbanks, Freegold Ventures Ltd. has discovered tungsten alongside the copper, gold, and silver on its Shorty Creek property in the Livengood Mining District.

Freegold identified the tungsten potential at Shorty Creek during a 2016 drill program to expand upon the porphyry mineralization associated with a large magnetic high geophysical anomaly at the Hill 1835 target on the property.

In addition to tungsten, continued drilling at Hill 1835 has tapped cobalt, a critical battery metal, with the copper, gold, and silver in this porphyry target.

The mix of base, precious and critical minerals at Shorty Creek has drawn the interest of Australian major South32 Ltd., which has agreed to invest up to US$10 million to this road-accessible property over a four-year span beginning in 2019.

Considering the amount of tungsten showing up in placer gold mining concentrates, often called black sands due to the color of this heavy material captured in sluice boxes and other gravity gold recovery systems, tungsten is common across Alaska's Eastern Interior.

While the load source of tungsten in the Circle Mining District has not been identified, a sample of fresh granite collected by Barker at the upper end of Boulder Creek, a stream known for its heavy tin mineralization, returned 22 ppm tungsten, 20 ppm tin, as well as gold and molybdenum.

Mother Nature has already milled and concentrated these critical metals in Boulder and other creeks in the area.

The Fortymile Mining District, located between the Circle District and Yukon's famed Klondike District, also has some interesting tungsten occurrences.

Scheelite and molybdenite were discovered at Happy, located near Duval Creek, around the same time. Float boulders of quartz veins collected at Happy contained as much as 0.82% tungsten and 0.3% molybdenum.

Much like its gold rush counterparts in Alaska's Interior, streams in the Nome area of western Alaska host intriguing amounts of placer tungsten. Lost River, a skarn deposit about 85 miles northwest of Nome, is particularly enriched with tungsten and other critical minerals.

The significant amount of tin found in the aptly named Cassiterite Creek led early miners and prospectors to the Lost River deposit around 1902 and small-scale underground mining began there shortly after the discovery.

At the time, the tin found in this deposit was the target of mining. The tungsten, fluorite (or fluorspar) and beryllium also discovered there – all currently considered minerals critical to the United States – were largely ignored.

This mix of metals drew the interest of Lost River Mining Company, which planned to mine the mix of critical metals there in the 1970s.

In preparation for developing a mine, roughly 16,100 meters of drilling in around 110 holes were drilled into the Lost River skarn.

Considering Lost River hosts four metals considered critical to America's economic and strategic security, the extra work needed to determine just how much tungsten, tin, fluorite, and beryllium the deposit contains may well be worth the effort.

Interior is not the only region of Alaska to produce tungsten in times of American need. During World War II, this critical industrial metal was also extracted from the zinc-lead-copper concentrates produced from the Riverside Mine in the Hyder District of Southeast Alaska.

The less than 100 current residents of Hyder embrace this disparity with the motto "the friendliest ghost town in Alaska."

The largest deposit of tungsten in Alaska may lie in the Bear Mountain occurrence along the southern slopes of the Brooks Range. 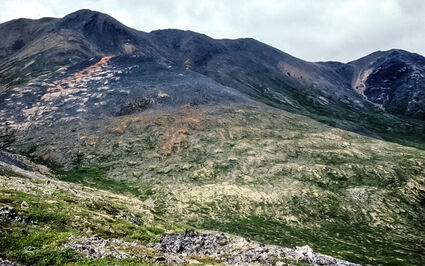 Bear Mountain northeast Alaska may host one of the largest tungsten deposits in the United States.

In addition to being located in a remote corner of northeast Alaska, this potentially world-class tungsten-molybdenum deposit is situated within the Arctic National Wildlife Refuge, or ANWR, a 19.3-million-acre region set aside for wilderness and wildlife conservation.

While Bear Mountain tungsten, molybdenum and niobium may be stored in an off-limits reserve, there are mines in Alaska that have answered America's urgent call for tungsten in the past and the state hosts many more that could answer a similar call should a pressing need for the durable industrial metal rise again in the future.