It was the best and the worst of times

In 2016, revolution was in the wind but never gained significant traction; now perhaps we can look ahead to a hopeful new day North of 60 Mining News – January 1, 2021 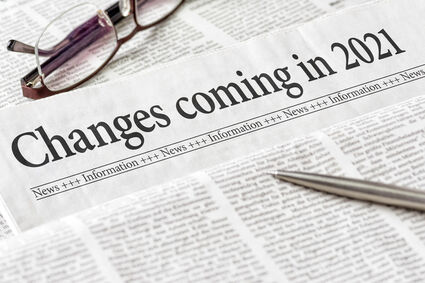 With 2020 in the rearview mirror, now is a good time to reflect on and prognosticate about Alaska and things mining.

First, with regard to things past, from the impeachment to the election, 2020 was not a great year. Despite the incessant sniping at the President's heels, the Administration almost survived for another term. Due to the weighting of the Electoral College system, some analysts tell us that a shift of only 22,000 votes would have changed the outcome. While the Trump White House did not do Alaska's mining industry any great favors, it caused little identifiable harm – the Pebble imbroglio notwithstanding. Over Trump's term, the federal regulators and the land-managing agencies did begin to fall in behind the leadership, and that was a good thing.

The statewide political situation was similarly askew. The bi-decennial review of Alaska's mining laws was a great step forward, but at the unfortunate cost of two of our industry's legislative stalwarts, Senators Geisel and Coghill. Assuming the Governor outruns a recall, Alaska has a strong cabinet but faces perpetual thwarting by federal counterparts. Nothing new here.

The price of gold was up dramatically, briefly scratching the underbelly of $2,000 per troy ounce only to settle down to the sub-$1,900 range. Ever-cautious miners went to great pains to protect themselves and their cohorts from the pandemic risk. In brief, 20/20 hindsight has taken on a new meaning, and the bulk of us have survived to fight another day.

Now that the State and nation are about to be inoculated against one strain or another of COVID-19, it is reasonable to ponder life under the aegis of President-in-Waiting Joseph Biden.

Domestically, the President-Elect's Secretary of Agriculture nominee, former Secretary Vilsack, bodes ill for the exemption of the Tongass from the so-called roadless rule. After fighting for decades to secure access into the forested and mineral rich lands of Southeast Alaska, we may expect an effort to vitiate that accomplishment.

The designation of Representative Haaland, a Westerner, to head the Department of the Interior foretells a long-overdue redirection away from real estate micromanagement and toward breathing life into a sleepy Bureau of Indian Affairs.

The choice of Michael Regan to head the EPA, given his background and focus on environmental justice, may be expected to cause that agency to see the world through the East Coast lens.

Of course, the efficacy of the above designees, when confirmed, will be colored by their respective Assistants; however, the initial thrust of the Man from Scranton suggests that Alaska issues, other than Pebble and the Tongass, are likely to draw scant notice.

Alaska's biggest federal burr remains the Army Corps of Engineers. Until there is a meaningful mandate to the Corps to facilitate project development consistent with the Corps' Clean Water Act responsibilities, innovative approaches to recovery of minerals from the 174,000,000 acres the Corps oversees, will be vulnerable to a subjective perception of the public interest.

It is fair dinkum to project that in 2021 American populism will fade into the background, that Progressives of whatever stripe will take a Starbuck's break, and that gory and gruesome international issues will ooze back onto America's radar screen.

Predictably, China will continue on its ascendent course, pending rapprochement. The European Union, wounded by Brexit, will founder or float as Germany demands. The Arab Spring having sprung, will fester for another decade. And the rest of the world will be confronted with an unprecedented massive economic crisis as it weathers the fallout from the Corona disease and tries to rebuild with insufficient resources.

What will be interesting to watch for is how our new guy navigates the larger issues of the day. Our national infrastructure is crumbling and demands attention. The War on Hydrocarbons is sure to dominate the popular press. Unfortunately, there will be no more tweets so no one will know what is on the top of Biden's head. Instead, everything will be worked out in the new old-fashioned way, as the former Senator privately works things out with his friends across the aisle.

Needless to say, (as always) the big issue for the foreseeable future will be money. In the face of a burgeoning economy, twelve years ago we all prayed that no one would tell Mr. Obama what came after a trillion. Four years ago, among other things, Trump cut taxes and soon the national unemployment level and interest rates were in the wee numbers. Then, along came the Wuhan Flu. In response, on Trump's watch, trillions of borrowed dollars were shoveled out the door. Now P-E Biden, in order to pay for his own programs, will have to raise taxes or borrow more money or probably both. That may prove to be a heavy lift. We wish him well.

Although during the past year or four, some long dark shadows have been cast, as always, tomorrow is only a day away.