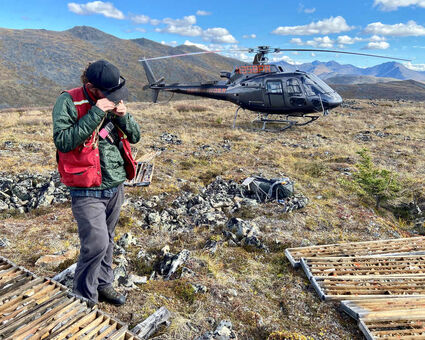 As a project generating exploration company, Millrock Resources Inc. identifies and secures grassroots mineral projects and brings on partners to fund the high-risk early stages of exploration. Currently, this work is primarily focused on gold and copper projects in Alaska and Mexico.

One of the largest and most intriguing Millrock generated project is 64North, which covers a 163,240-acre swath of Alaska's Goodpaster Mining District.

Under a deal cut late in 2019, Australia-based Resolution Minerals Ltd. has the option to earn a 60% joint venture interest in 64North by investing US$20 million in exploration over four years.

West Pogo, which borders Northern Star Resources Ltd.'s Pogo Mine property, was the primary focus of Resolution's spending in 2020.

The exploration at West Pogo got off to an early start but was idled in late March, and mid-way into the second hole testing the Aurora target, due to health and travel concerns related to the COVID-19 pandemic.

Drilling resumed in June and the partners completed five additional holes at three targets – five at Aurora, and one each at Echo and Resolution – during the summer program.

While this drilling encountered alteration and veining indicative of the Pogo-style mineralization being sought, none of the holes returned the high gold grades targeted.

A seven-meter-thick zone of shallow-dipping quartz veining with anomalous gold tapped in the final summer hole at Aurora was of particular interest. Seeking higher grades, the 64North partners drilled two additional holes at Aurora during a winter drill program that got underway in November.

As drills were turning at 64North, Millrock secured exclusive rights to the Treasure Creek and Ester Dome gold exploration projects in the Fairbanks Mining District.

Treasure Creek is a roughly 34,600-acre land package about 20 miles west of Kinross Gold Corp.'s Fort Knox Mine. According to Alaska Division of Geological and Geophysical Survey reports, more than 148,000 oz of placer gold has been mined from the streams draining the Treasure Creek claim block.

Under an agreement with Treasure Creek Partnership, Millrock may enter into an option to purchase at any time up to Sept. 30, 2021.

Millrock has held a similar exclusive agreement on the Ester Dome property since 2016.

Two major placer gold producing streams, Sheep Creek and Ester Creek, are in valleys draining the Ester Dome property, which is situated about 25 miles southwest of the Fort Knox Mine.

EDITOR'S NOTE: On Jan. 12 Millrock announced that it has vended Treasure Creek, Ester Dome, and Liberty Bell to Felix Gold Ltd., a newly formed Australian mineral exploration company. More information on can be read at Aussie nabs Fairbanks area gold projects in the January 15 edition of North of 60 Mining News.