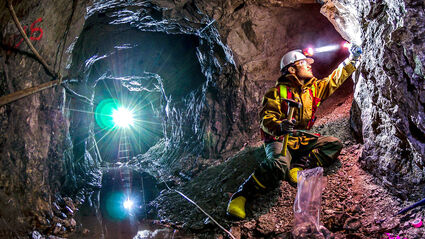 A geologist collects samples from the wall of one of the historic underground mines on the Dolly Varden silver property in Northern British Columbia.

A more than 10,000-meter drill program focused on exploring new zones of high-grade silver and expanding the resources already outlined was the centerpiece of Dolly Varden Silver Corp.'s 2020 exploration across its namesake property south of Stewart, British Columbia.

The 2020 drill program initially focused on expansion of the resources at the past producing Torbrit Mine.

Most of this new target drilling was carried out along the more than 4,500-meter-long Torbit trend, a silver-rich alteration belt that extends north from the Torbrit Mine, over the Wolf Mine, onward to the Chance and Ace-Galena showings.

Hecla, which originally invested in Dolly Varden in 2012, has rights to maintain its roughly 11% interest in the company. Exercising these rights, the North American silver miner acquired 1.3 million Dolly Varden shares at C33 cents and 1.1 million shares at C40 cents during two financings that closed in June.

As a result of his participation in these private placements, Sprott now owns roughly 19% interest in Dolly Varden and Hecla owns about an 11% stake in the Northern BC silver exploration company.

CORRECTION: The size of the Dolly Varden property has been corrected to 8,800 hectares.