Why can't we placer mine tidal wetlands?

After over a century of mining Alaska beaches what objection could Corps have to placer mining tidally influenced wetlands? North of 60 Mining News – January 29, 2021 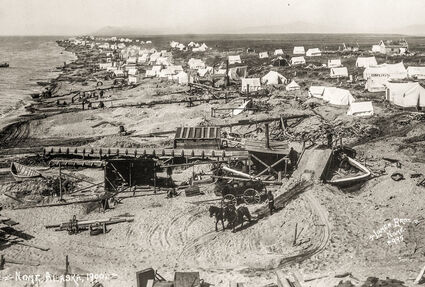 Mining placer gold from the beaches of Nome, Alaska in 1900.

It has often been said that one should never watch sausages or laws being made. There are good reasons for saying that, especially in our quasi-democratic environment. For just cause we have barriers to rabble-rule, including things like executive vetoes, impeachment, and periodic elections. These safeguards, however, do not keep the "representatives of the people" from coming up with inconsistent, incomprehensible, and incredibly awful laws. Fortunately, again, we have two separate and independent systems available to us to exacerbate an often bad situation.

First, we have the court system which is charged with deciding which of the parties before it has hired the better lawyer, merit to the contrary notwithstanding. In addition, we have an attendant bureaucracy charged with divining what the lawmakers meant and putting their personal spin on the substance before them.

As a common ground, we can all applaud this marvelous, if convoluted, system of making good things happen and preventing not-so-good things from happening, at least occasionally. Surely, a constitution-based representative democracy is the best form of government, other than the benevolent dictatorship contemplated by Plato so many centuries ago. But, since no one has ever found the right person for that job, we are stuck with what we have – a vast number of public-minded citizens pulling the ship of state in an equally vast number of different directions in uncharted waters.

Zeroing in on one of the plethora of issues manifest before us is the regulation of placer mining in Alaska by the US Army Corps of Engineers. Placer mining in general dates back to time immemorial, and in Alaska perhaps almost that long. The Russians mined for gold when they first crossed the Bering Strait and when they arrived, they found the resident population already trading in mined metal undoubtedly derived from the local creeks and streams.

In due course, invasive prospectors tried their luck and broke their picks from one end of the Territory to the other in a relentless search for native gold as well as other metals. Mining methods were as creative as they were destructive of the environment. But who knew that turbidity might be a pollutant?

Fortunately, just in the nick of time, lawmakers, bureaucrats and the courts stepped in to save us from our mutually assured destruction. They passed the Clean Water Act, to keep us from muddying the water. They tasked the Corps with keeping our wetlands fruitful, and they created a theretofore unknown demand for endless forms and analyses.

They let us know that, as the poet said, "[e]very step you take, every move you make, [they'll] be watching you."

Of course, there is an escape hatch. If the project is small enough and innocuous enough and insufficient to make wages, then there might be an exception in your case. On the other hand, you cannot go mining in tidally influenced waters, or in navigable waters, because on a remote beach in rural Alaska, there is no telling how much mud you might stir up and how badly that will impact commerce.

To get to the point, the Corps has just released, on Jan. 14, a "Special Public Notice" announcing the reissuance of 12 existing nationwide permits (NWP) and four NWPs to go into effect on March 15. On the list is NWP 44 addressing mining activities.

In the discussion leading up to the reissuance of NWP 44, the Corps mentions some astounding facts, like "[t]here are approximately 283.1 million acres of wetlands in the United States; 107.7 million acres are in the coterminous United States and the remaining 175.4 million acres [almost 62%] are in Alaska."

The Corps goes on to define wetlands as "those areas that are inundated or saturated by surface or ground water at a frequency and duration sufficient to support, and that under normal circumstances do support, a prevalence of vegetation typically adapted for life in saturated soil conditions. Wetlands generally include swamps, marshes, bogs, [permafrost] and similar areas."

Although "[m]ining activities are likely to have positive impacts on the local economy ... [and] are likely to generate jobs and revenue for local mining companies as well as revenue to building supply companies who sell aggregates and building materials made from aggregates or the metals extracted from metalliferous ores.... [t]his NWP does not authorize mining activities in tidal wetlands."

To be fair, on Oct. 30, 2020, the Corps also released General Permit POA-2014-00055-M1 dealing with mechanical placer mining activities within the State of Alaska, as long as it does not involve the use of a "suction device to remove bottom substrate from a water body and then discharge the material from a sluice box for the purpose of extracting gold or other precious metals." Who would ever do such a thing?

The Corps does note that "Mining activities in tidal waters have potential for causing more than minimal individual and cumulative effects, and from a national perspective should be evaluated under the individual permit process. However, district engineers can develop and issue regional general permits to authorize mining activities in tidal waters in areas where these activities usually result in no more than minimal adverse environmental effects," but there is no mention of that possibility occurring any time soon.

Given the amount of land in Alaska that is subject to Corps oversight, perhaps now is the time for the State to seek primacy over wetlands management or at least seek a tidal water permit exemption for Alaska's placer miners.