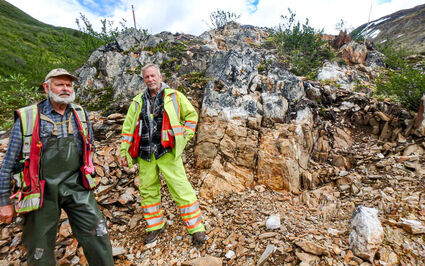 One of few mineral explorers active in Yukon Territory during the mining industry's 2020 beleaguered field season recently reported encouraging results that give credence to the idea that a new gold camp may be on the verge of emerging in Canada's North.

Golden Culvert is located near the Yukon-Northwest Territories border only a few kilometers from the now-shuttered Cantung tungsten mine, and the all-season Cantung Mine Road runs through the gold project's claims.

Some 20 kilometers (12 miles) to the south lies Seabridge Gold Inc.'s recently acquired high-grade 3 Aces project, where a rock sample assaying 5,401 grams per metric ton gold was discovered in 2003 and numerous high-grade occurrences have been identified since.

All these properties are situated on the Hyland Gold Belt, a geologic extension of the Tombstone Gold Belt, which encompasses the Dublin Gulch Project, home of the Eagle Mine, currently Yukon's sole producing gold mine, as well as the advanced Brewery Creek Mine project and the Plata gold deposits farther to the northwest.

At Golden Culvert, a largely unexplored property, Toronto-based Stratabound has in recent years identified six parallel gold-bearing veins that lie within a 130-meter-wide gold vein "corridor" along 970 meters of strike. The mineralization is open in both directions and at depth below 150 meters.

Encouraged by the first-phase results, the explorer undertook a second-phase program of diamond drilling in the late fall and completed 3,217-meters in 17 drill holes.

The drilling also encountered a second near-surface zone yielding 0.64 g/t gold over 18.0 meters of mineralized wall-rock between 21.0 and 39.0 meters down the hole, including the higher-grade West Vein, which yielded 1.24 g/t gold across 4.2 meters.

"The results of this first hole are consistent with past drilling and trenching results we have received to date," Stratabound Minerals President and CEO R. Kim Tyler said in a statement Jan. 12. "It is an irony that the successful return of market interest and funding into the junior resource sector has created high demand and long delays in accredited assay labs. That being said, we anticipate receiving and reporting results on a timely basis going forward."

"These early drill results occur at the extremities of the higher-grade central mineralized area we have focused on to date and as such underlie the weakest portions of the plus-30 parts per billion gold-in-soil anomaly. We are encouraged that significant gold mineralization occurs both within and without the anomaly outlines at these locations and remains open beyond and to depth," said Tyler.

Seabridge Gold completed its purchase of the 3 Aces gold project from Golden Predator Mining Corp. in May 2020 for 300,000 Seabridge common shares, potential future cash payments totaling C$2.25 million, and continued participation in the project through a 0.5% net smelter royalty on future gold production.

Seabridge Gold Chairman and CEO Rudi Fronk has described 3 Aces as a first-rate exploration play with the potential to host a high-grade commercially-viable ore body.

Past drilling has encountered a significant number of gold-rich zones on the stratigraphic/structural contacts at 3 Aces. By early 2019, the project had completed about 300 holes; 37% of which encountered +5.0 g/t gold intersections and 27% returned +8.0g/t gold. Many of the holes were close-space offsets on high-grade veins that crop out, but all veins identified in the Central Core Area have encountered high-grade intersections.

"Our current plan is to assemble and evaluate the wealth of data developed by GPY for the targets in the Central Core Area with a view to initiating an aggressive drill program (in 2021)," Fronk said in a statement.

Aben has said the Justin property hosts an intrusion-related gold system in an emerging camp better known for orogenic gold and tungsten. The junior, which has focused exploration efforts recently on gold properties in British Columbia, said its 2017-2018 exploration programs discovered the potential for orogenic gold mineralization on the Justin Property at the Lost Ace, where visible gold was observed in quartz veins from two trenches.

The explorer has said the projected middle Yusezyu formation, which also hosts mineralization on the 3 Aces property, trends onto the Justin Property, making it a potential exploration target and/or source of metals for the intrusion related gold system. Only 2,500 meters have been drilled to date at Justin's POW zone, tracing gold mineralization from surface over an area measuring 400 meters by 200 meters to depths exceeding 200 meters. Aben says numerous high-priority targets remain untested, representing significant exploration potential.

Gold to the south 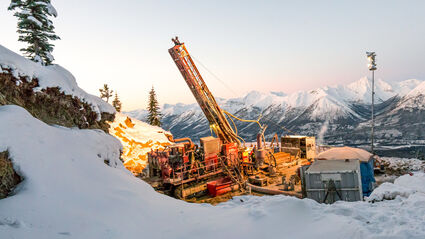 Winter drilling at 3 Aces, a high-grade gold project about 12 miles south of Golden Culvert that was acquired by Seabridge Gold last year.

The resource is located in its entirety on what is known as Main Zone, which is open in all directions and at depth, and has the potential to host a multi-million-oz deposit. Banyan also has identified three other zones at Hyland – Camp, CUZ and Montrose Ridge.