The only city in Northwest Territories

By the 1940s-50s, when this photo was taken, the haphazard collection of tents and log shacks at Yellowknife's "Old Town" had evolved into a more contemporary community.

Far to the north lies the second largest of Canada's three territories, simply named the Northwest Territories, and within this vast region of more than 400,000 square miles lies its only city, the capital called Yellowknife.

Yellowknife, and most of the region of the Northwest Territories, lies within what is known as the Canadian Shield, a large area of Precambrian igneous and metamorphic rock, meaning it dates to the earliest part of Earth's history.

Scoured down to stone during the last ice age, glaciation has receded over time, revealing a joined bedrock region in eastern and central Canada, stretching from north of the Great Lakes to the Arctic Ocean, this shield covers more than half of Canada and most of Greenland, and extends south into the northern parts of the United States.

Human population is sparse and industrial development is mostly minimal, save for mining, which is prevalent and the mainstay of Northwest Territories today.

As per most mining settlements, the Yellowknife region was traditionally home to First Nations people before European settlers would find themselves staking ancestral lands.

It was a prospector by the name of E.A. Blakeney that would first discover gold in the Yellowknife Bay area in 1898, yet this discovery would be brushed aside as the allure of the Klondike Gold Rush was too great and the region too remote to attract attention.

While mostly fur trading occurred in the area preceding the Klondike Gold Rush, it would not be until the late 1920s that modern Yellowknife would emerge, a city that now serves as a cultural, economic and governmental hub for the 20,000 people now living in Northwest Territories' only city.

The moniker of Yellowknife owes its name to a Dene band who historically occupied and traveled between Great Slave Lake and the Arctic Ocean.

It was fur trading in the late 18th century that drew the first European settlers to Northwest Territories, with the activity being centered around a small outpost called Fort Providence, established about 30 kilometers (18.6 miles) southeast from present day Yellowknife.

An explorer by the name of Samuel Hearne, called the local people he encountered in this region 'Copper Indians' in 1771 because of the knives they carried made from copper. Explorers and traders, observing their copper tools, coined the term Redknife which later became Yellowknife to describe the tribe.

Yellowknife, also called Tatsanottine, was a small Athabascan tribe that was either related to or attacked, depending on the source, by the Chipewyan people and later the Tlicho Dene.

Between disease brought by European settlers and fighting with other First Nation tribes the Yellowknife tribe was nearly wiped out.

Yet, many of the present aboriginal people of Yellowknife City are now descendants of the Yellowknives and Tlicho Dene and continue to practice the traditional lifestyles of Dettah and N'dilo, two of the six current native subcommunities of Yellowknife.

The modern city of Yellowknife was established as a fueling cache point for aerial exploration to explore Canada's Arctic regions but really got its start after a discovery of gold in 1934.

After samples of uranium and silver were discovered at Great Bear Lake in the early 1930s, the fuel cache drew interest from would-be fortune seekers that quickly began to spread throughout the area.

It was then that two prospectors named Herb Dixon and Johnny Baker, canoeing down the Yellowknife river from Great Bear Lake surveying for possible mineral deposits, spotted visible gold at Quyta Lake, roughly 30 kilometers (18.6 miles) up the river.

The following year, Baker returned as part of a larger crew to develop the previous gold finds and search for more. Shortly after, gold was found on the east side of Yellowknife Bay and the short-lived Burwash Mine was developed.

However, it was government geologists' discovery of gold in a more favorable area on the west side of the Bay in the fall of 1935 that spurred the first small staking rush in the area.

This gave rise to the historic Con Mine, the most impressive gold deposit discovered at the time. It was the development of this mine that gave rise to the first commercial settlement which created the craze for more gold, and by 1938 the bay was site to a boom town.

Early Yellowknife, like nearly all mining towns, was a haphazard collection of tents, log shacks and businesses scattered around the bay, an area now known as "Old Town."

The Corona Inn, Vicky Lepine's laundry, Wildcat Café, Weaver & Devore Trading, Sutherland's Drugs, Vic Ingraham's hotel, and a post office were among the first establishments to spring up during the initial boom.

Shortly after, the Canadian Bank of Commerce, Hudson's Bay Company, and even a pool hall was built as well.

The population quickly grew to 1,000 people by 1940 and by 1942, five gold mines were in production in the Yellowknife region.

However, again like most mining towns of that era, the onset of World War II sapped the life from this remote location, sending men to war and the demand for gold declined to a point the settlement nearly dried up.

Manpower demands for the second World War shut down all mining operations except the Con Mine, but development quickly resumed after the war.

Yet in 1948, Yellowknife would experience its second boom which would expand activity and set itself toward permanent status.

An exploration program at the Giant Mine property on the north end of town had suggested a sizable gold deposit in 1944, yet due to the war any attempts to pursue these claims were stalled.

This was not forgotten though, as this new find resulted in a massive post-war staking rush to Yellowknife.

With new blood flooding in, new discoveries at Con Mine happened as well, greatly extending the life of the mine, inevitably, there was no further room for expansion on the crowded Yellowknife Bay and a new townsite was started further inland in 1945.

Governance had grown from an Ottawa-controlled administrative district in 1939 to a fully elected municipality in 1953.

For many years Yellowknife was primarily accessible only by water, with most of the bulk freight being brought up via barge from Alberta through the Slave River system.

In the winter, freight was consigned north by tractor train and ice road trucks while year-round passenger and mail service was through scheduled airlines from Edmonton.

It was in 1960 when the isolation of Yellowknife would finally end as a highway was built to connect to the outside world. With the continuous resources from the Con and Giant Mines, the city came to an age and stability that warranted its influence throughout the region and in 1967, Yellowknife was declared the capital city of the Northwest Territories.

The largest credit to the stability and growth of Yellowknife would go to the Con and Giant Mines, with Giant becoming one of fewer than a dozen gold mines in the world to produce 10,000 gold bricks in 1986.

Both historic mines would close in the early 2000s, and although the city had made it through nearly a century of hardships and uncertainty, mining is still the mainstay and a fourth boom in 1991 continues to pay dividends.

Yellowknife, a diamond of the north

As gold production had begun to wane, the city had started to shift from being a mining town to a center of government services in the 1980s, yet with a discovery roughly 300 kilometers (190 miles) north of the city, the fate of Yellowknife was changed once more.

It was the discovery of diamonds in 1991 that reversed the shift to a new economic focus and staying true to its mining roots, in 1998, Canada's first diamond mine, the Ekati Mine would open in October of that year.

Since the official opening in 1998, to 2017, Ekati produced around 67.8 million carats of diamond and is still in production today.

Currently, tourism, transportation and communications are included in important industries that support the Northwest Territories and Yellowknife economy.

Within the territory, in its history of mining, 26 different mines from silver to gold, to lead and zinc, and even uranium, existed and exists to continue keeping Yellowknife a thriving city in the middle of a frozen wilderness.

Through the unlikely beginnings that were nearly forgotten, to a war that gripped the world in fear, Canada and mining have a history as intrinsic to its nature as America and the Wild West. 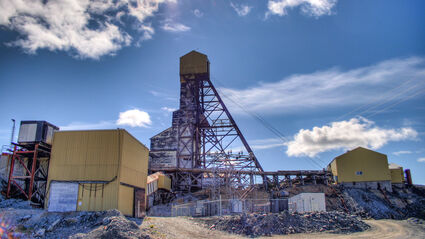 A headframe rises above the historic Giant Mine, an operation on the outskirts of Yellowknife that produced roughly 7 million ounces of gold.

This often-neglected gentle giant of the north, is home to some of the richest resources for precious metals, rare minerals and scarce elements, and the only city within the sprawling northern territory of Canadian Northwest Territories, which will continue to stay true to another name it is known by, Somba K'e, which means "where the money is".