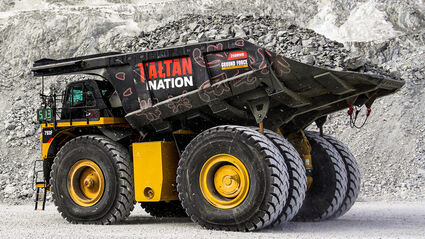 The Red Chris Mine in Northern British Columbia now hosts 13 million ounces of gold and 3.7 million metric tons (8.16 billion pounds) of copper, according to a new resource calculated for Newcrest Mining Ltd.

This marks the first resource calculation for Red Chris since Newcrest acquired a 70% ownership of the mine from Imperial Metals Corp. in August of 2019. Since gaining operational ownership, Newcrest has completed 109,177 meters of drilling in 92 holes at Red Chris.

This initial JORC-compliant resource will form the foundation for a prefeasibility study that will provide a first look at block cave mining at Red Chris.

Block cave mining is a bulk tonnage underground mining technique that involves starting at the bottom of the orebody and allowing the deposit to progressively collapse under its own weight.

Newcrest has been successful with this technique at Cadia, an Australian mine similar to Red Chris.

"The announcement of our initial mineral resource estimate marks another milestone in our transformation of Red Chris," said Newcrest Mining CEO Sandeep Biswas. "We remain on track to release the findings of our block cave Pre-Feasibility Study by the end of September 2021 and continue to evaluate a number of early mining options which could enable an acceleration of cash flows prior to the development of a block cave."

One opportunity for accelerating cash flow from Red Chris is mining high-grade pods identified there with more conventional underground methods ahead of block caving.

Imperial Metals, which retains a 30% interest in the Red Chris joint venture, first tapped a high-grade pod in the East Zone with a 2009 hole that cut 432.5 meters of 2% copper and 3.8 g/t gold.

In February, Newcrest announced a C$12 million budget to begin construction on the box cut for the underground decline at Red Chris. The surface work and related infrastructure being established by this work is in preparation for the underground development needed for more detailed exploration and eventually mining.

"The commencement of construction of the box cut is a significant milestone in the objective of having a block cave in operation at Red Chris in the next five to six years," said Biswas.

And the underground development could set the stage for mining high-grade zones in the interim.

Considering the recent drilling success, there will likely be more high-grade pods to mine ahead of block caving.

The first four holes of the 2021 drilling at Red Chris, reported by Newcrest in early March, all encountered significant copper-gold mineralization, including an important new discovery dubbed East Ridge.

The company says the style of mineralization and grade is similar to that seen in the high-grade pods at East Zone, which lies about 300 meters to the west.

"Drilling to determine the significance of this new zone is underway, with the results from this initial intercept highlighting the potential for additional discoveries at Red Chris," Biswas said. 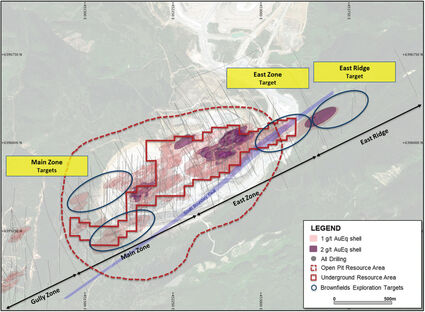 In addition to the exciting East Ridge discovery, Newcrest and Imperial report that drilling at the East and Main zones continue to confirm the potential to expand higher-grade zones of mineralization at Red Chris, including south of the South Border Fault, which was previously considered the southern edge of the Main and East zone mineralization.

CORRECTION: This article was updated on April 23, 2021 to correctly state the pounds of copper in measured and indicated resources at 8.16 billion lb. The copper tonnage in the previous version was correct but the conversion to pounds was inaccurate.