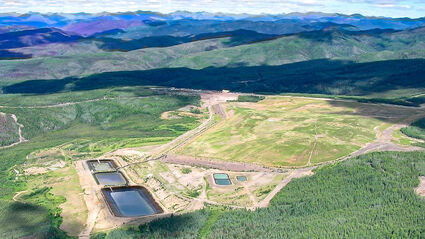 Looking down on the heap leach pad during a 2019 flyover of the past producing Brewery Creek gold mine in the Yukon.

Golden Predator Mining Corp. April 1 said it has submitted applications to renew the water use and quartz mining licenses for its Brewery Creek gold mine project in the Yukon.

A road-accessible project about 35 miles (55 kilometers) east of Dawson City, Brewery Creek is the home to a mine that produced roughly 280,000 ounces of gold over seven years of mining that began in 1996. This operation used seasonal heap leaching – a method of gold recovery that involves stacking ore in a lined facility and using cyanide to separate the gold from the rock – to recover gold mined from a series of seven open pits spanning the property.

In 2019, Golden Predator informed the Yukon government of its plans to resume operations at Brewery Creek. With the territory's acceptance of this notice, the junior mining company holds water use and quartz mining licenses that are set to expire at the end of 2021.

The applications submitted by the company would extend these licenses for another ten years. Golden Predator says it is working on a document to meet Yukon Environmental Socio-economic Assessment Act requirements and expects to submit the project plan just after mid-year.

The Tr'ondëk Hwëch'in First Nation has indicated its support of resumed mining and processing at the Brewery Creek Mine under the existing licenses.

Golden Predator says it looks forward to working with Tr'ondëk Hwëch'in, the Yukon Department of Energy, Mines and Resources, and the Yukon Water Board to advance the renewal applications.

A feasibility study currently underway is detailing plans for a phased resumption of mining at Brewery Creek.

During the initial phase, the renewed operation will reprocess material on the heap leach pad, which hosts roughly 248,000 oz of unrecovered gold, and newly mined oxide ore from areas of the Brewery Creek property already permitted for mining. A second expansion phase of the operation is expected to include mining gold mineralization identified outside of the area that falls under the permits from Viceroy-era mining. 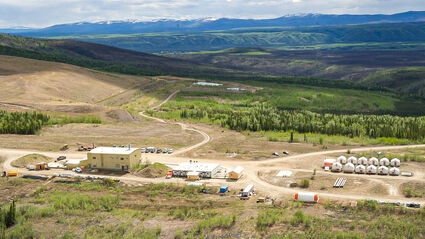 Golden Predator is expanding the camp near the previous mill site and heap leach pad at Brewery Creek.

The new calculation also includes 30.6 million metric tons of inferred sulfide resource at 0.84 g/t (828,000 oz) gold, which will be considered for mining in later phases of Brewery Creek operations.

A 32-hole drill program completed last fall focused primarily on expanding and upgrading these resources ahead of the feasibility study, which will detail the economic and engineering parameters of re-establishing an open-pit mining and heap leach gold operation at Brewery Creek.