The Red Dog Mine produced 573.2 million lb of zinc during the second quarter, a 67% increase over the same period of 2020.

Red Dog had a particularly strong second quarter, producing 140,300 metric tons (309.3 million lb) of zinc, which is a 17% increase over the first three months of 2021 and a 67% jump over the second quarter of last year.

The lower 2020 mill throughput was largely due to climate-related water management issues at the Northwest Alaska operation.

"Climate change is affecting conditions in the receiving environment, which limited our ability to discharge treated water in 2020, leading to increased water in the storage facilities," Teck penned in a report published earlier this year. "Throughout 2020, we completed several projects to increase storage capacity and implemented a breakthrough RACE21 project that significantly increased water treatment capability. In addition, a new water treatment plant was installed to increase the water discharge capacity when permit limitations allow. These projects removed the temporary restrictions from the mine plan put in place to manage water levels in 2020." 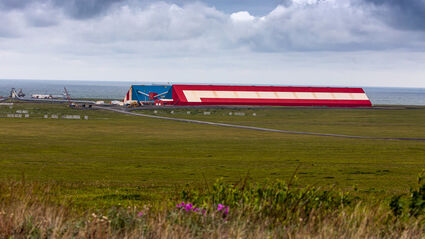 Two of the largest buildings in Alaska, these port houses at the west end of the 52-mile-long Delong Mountain Transportation System store zinc and lead concentrates produced at Red Dog to be shipped out when the ice leaves each summer. The 2021 shipping season got underway on July 19.

The shipping season at Red Dog got underway on July 19 and Teck expects its sales of zinc in concentrate to be in the range of 180,000 to 200,000 metric tons (396.8 million to 440.9 million lb) during the third quarter of 2021, which reflects the normal seasonal pattern concentrates shipped and sold from Red Dog.