A meteoric rise and fall, the town that sprouted out of nowhere during the Klondike days only to disappear like many others North of 60 Mining News – July 30, 2021 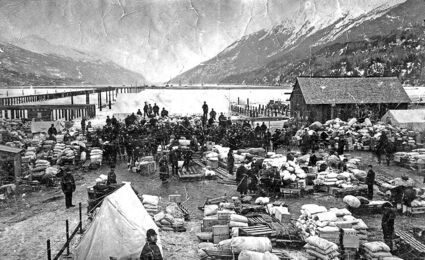 The Dyea waterfront during the Klondike Gold Rush, 1898.

If one were to stand in the dense, silent coastal forest at the head of the Taiya Inlet today, it would be nearly impossible to imagine that 123 years prior, this Southeast Alaska locale was home to Dyea, one of the most meteoric boomtowns in North American history. Transforming from the timeless presence of nature to a bustling city and then back again over the span of a few years, for a brief moment of history Dyea offered gold-hungry pioneers a final taste of civilization before venturing forth into the unknown during the famous Klondike Gold Rush era.

Oral history accounts indicate that at one time, Dyea was a small permanent village, and in the decades before the gold rush, it was a seasonal fishing camp and staging area for trade trips between the coast and the interior. In fact, the name Dayéi means "to pack" in Tlingit.

The region of Dyea and the more enduring city of Skagway had long been occupied by the Chilkat and Chilkoot Tlingit Indians, who used the Chilkoot Pass – one of only three passes that could be used all winter in the northern Lynn Canal area – to trade with interior First Nations people.

These Alaska Native tribes provided goods from the interior to Russian, Boston, and Hudson's Bay trading companies. The Chilkoot Pass was their main trade route, which they did not permit others to use until, in 1879, when U.S. Navy Commander L.A. Beardsley came to an agreement with the Chilkat Tlingit people in which miners would be allowed to reach the Yukon via the passes but would not interfere with their regular trade.

Tlingit guides accompanied the first party over the pass in May 1880 and transported the miners' gear for a fee. This trip would set the foundation for the Tlingit packing business to thrive during the gold rush.

Dyea would compete fairly evenly with Skagway during the latter half of the Klondike Gold Rush, yet the settlement would not last as avalanches, forest fires, and the eventual railroad through White Pass shifted focus to Skagway, which has managed to survive through the century.

Today, there is little to indicate that a town once existed on the tidal flats at the mouth of the Taiya River. With many of the buildings either having been taken apart or moved or even burned down once the rush finally settled, the reclamation of nature has long since removed the old townsite, leaving behind nothing but cemeteries, a few scattered foundations, and the history of this once great stopover.

The boom of Dyea

Dyea's status changed with the establishment of the Healy & Wilson trading post in the mid-1880s. Consisting of a wood-frame building that served as a combination store and residence, barn and garden, this outpost was an important supply and information point for prospectors heading into the Yukon basin before the Klondike Gold Rush.

Alaska Natives and First Nation peoples would gather at the post, particularly in the spring, to help the prospectors pack their outfits for their journeys. It was especially convenient as a nearby Tlingit village was located just upriver from Dyea.

Dyea's real boom, however, would begin in the fall of 1897, after word about the wealth of the Klondike strike made newspaper headlines in mid-July. For months, boats jammed with prospectors would disembark in Dyea, streaming north over the Chilkoot Pass.

Few would remain in the area very long and by September, Dyea was still nothing more than the Healy & Wilson trading post, a few saloons, the nearby Tlingit encampment, and a motley assemblage of tents. Yet, that would all change in October, when speculators mapped out a townsite.

Dyea's biggest growth began when the Yukon River system started to freeze up, and the winter storms slowed traffic through the pass. By mid-December, 1,200 people would hole up for the winter, many of which lived in tents, but the streets had been laid out, and carpenters were busy building more permanent and comfortable structures.

In January of 1898, the Dyea Trail newspaper began publication, announcing that "the world can now be assured the finest system of Wharves and Warehouses in all Alaska will be constructed here at the mouth of the Chilkoot Pass, the only route to the greatest goldfields known to history."

During that year, Dyea reached its height of prosperity, boasting over 150 businesses, including restaurants, hotels, supply houses, and saloons. Some of the town's new buildings were fairly large, including the Olympic Hotel, a three-story 75-by-100-foot structure that was billed as "the largest in Alaska."

Another newspaper, the Dyea Press, also started running along with two transport companies that ran its line up the Chilkoot Trail to Bennett and the other to Skagway. For health and wellbeing, the community sported drugstores, doctors, a dentist, and two hospitals. If those services did not suffice, the boomtown also boasted three undertakers.

There were two wharves, many warehouses, and freight sorting areas, and even a sawmill. Furthermore, the town had one church, and although it never established a formal government, it did have a chamber of commerce, a volunteer fire department, and a school that began in the summer of 1898.

In just a few months, the downtown area grew to be five blocks wide and eight blocks long, with its population peaking at 3,500 residents.

Yet, fate or any other powers that be, would not provide prosperity for Dyea any longer. Although it kept an even pace with its neighbor Skagway, just 10 miles to the south, on April 3, 1898, what is considered the deadliest event of the Klondike Gold Rush, would wash away buildings and lives, of which most of an entire cemetery that still exists today is filled from just one day.

Between Sheep Camp and the Scales on the Chilkoot Trail, numerous slides took place on April 3. Five slides directly involved stampeders, and three resulted in the loss of life. Another slide the following day took the lives of two others. Altogether, over 65 lives were lost, although the official count is not truly known. Many other snow slides took place on the Chilkoot Trail during the gold rush, but relatively few endangered the lives of stampeders as the Palm Sunday Avalanche did.

The Palm Sunday Avalanche was one of the most widely reported events of the Klondike Gold Rush. Coverage of the disaster was probably second only to the initial news proclaiming the wealth of the goldfields.

Moreover, scores of stampeders wrote about the event, whether they were close to the scene or otherwise. Following is an excerpt taken from various accounts of the event.

"On the night of April 2, avalanches began to tumble down the slopes above the Scales. At about 2:00 the next morning, one of the slides buried twenty stampeders in the Scales area; another one, at about 9:30, buried three others. All of these people were rescued, but the roar of additional snow slides convinced the entire Scales population to evacuate, along with a number of construction workers for the Chilkoot Railroad and Transport Company who had been on the top of Chilkoot Pass. Some 220 people, therefore, began to descend toward Sheep Camp. Workmen for the tramway went first; the remainder left the Scales between 10:45 and 11:00 a.m. At the time of the mass descent, it was snowing heavily, and visibility was cut almost to zero."

Rescue operations would continue for four days, while all traffic over the trail had been halted. Rescuers first attempted to save as many lives as possible. However, estimates varied widely as to the number of lives that had been saved.

One person had noted that "only one or two persons were taken out alive." However, the New York Times reported that about 25 had been rescued, while the Dyea Press claimed that 40 or 50 were pulled from the snowpack because they held onto the communal rope.

A compilation of accounts appears to indicate that at least 10 people who were initially buried by the snowpack were dug out alive. At least four of those, however, later died of exposure.

Conflicting stories from the time make the number of casualties nearly impossible to know. At first, wild reports were circulated that two or three hundred lives were lost. But after the rescue process began, more modest estimates were made, and several lists of the dead were compiled.

There were four different lists, each from a different publication, that was known to be produced. The number of names on the four lists was 48, 51, 65, and 70. Significantly, few names appear on all four lists. The sources for these lists are not known, and because almost no biographical information is known about the large majority of the victims, there is no practical way to verify the authenticity of the various lists.

A fifth list of names appears on the headboards at Dyea's Slide Cemetery. Because many remains were shipped outside for burial, this list is not complete. However, it is important to note that several of the names on those headboards do not match those found on any of the published lists.

Today, the Slide Cemetery near Dyea is a major existing landmark for the Palm Sunday Avalanche, and the sight of the slide itself is marked only by a nearby interpretive sign.

The final death knell for Dyea was the construction of the White Pass & Yukon Route railroad, which began in Skagway in May 1898 and funneled most new stampeders to Skagway.

As the avalanche received nationwide and even global attention, the negative publicity steered many prospectors away from Dyea. The opening of the Yukon River also brought a mass exodus from the town as the stampeders left for Dawson City.

But it was the railroad that drove in the final spike.

Freight destined for the tramways of the Chilkoot Railroad & Transport Company continued to pour through Dyea, but few passengers filed into town. By that time, the gold rush was already declining, and only one town was needed to service traffic to the interior.

Beginning with the fall of 1898, Dyea began to fade away, and that winter, the onslaught of snow slowed and then halted the tramway operations on the Chilkoot Trail. By the spring of 1899, portions of the Long Wharf were no longer usable, and in July, a forest fire burned the nearby U.S. Army camp stationed at the Dyea-Klondike Transportation Company. The troops then permanently moved to Skagway.

An article written in the Klondike Nugget of Dawson City in 1900 perhaps marked the final prayer for Dyea.

"There is no longer a port of Dyea. The erstwhile busy town having lost its teeming population of hurrying gold seekers and temporary traders and dwellers, has lapsed into a deep sleep. The thousands of former townsfolk had dwindled to hundreds, and the hundreds to a few tens. Then some mysterious power moved the spirit of some one to have the port closed. So now, says the Alaskan, it is closed."

In February 1978, the National Park Service bought much of the old townsite of Dyea, which has become recognized as a National Historic Landmark. Unfortunately, though, there is scant evidence that the town ever existed at all.

Popular as a tourist attraction out of Skagway, the main sights, besides the beautiful scenery, are the memories of those lost during those harsh times in the Historic Slide Cemetery, as well as the knowledge and ample amount of photographs that can be found of life in that brief town, lost but not forgotten. 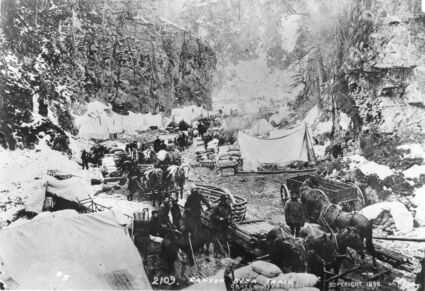 A Dyea campsite at the base of the Chilkoot Trail, 1898.