Antimony may be a renewable energy hero 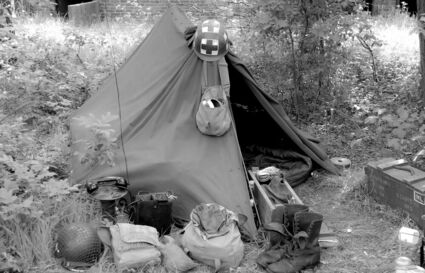 An unsung war hero that saved countless American troops during World War II, an overlooked battery material that has played a pivotal role in storing electricity for more than 100 years, and a major ingredient in futuristic grid-scale energy storage, antimony is among the most important critical metalloids that most people have never heard of.

While antimony may not be part of the common lexicon, humans have been using this semi-metal for more than 5,000 years.

"For example, the ancient Egyptians and early Hindus used stibnite, which is the major ore mineral for antimony, to produce black eye makeup as early as about 3100 B.C.," the United States Geological Survey penned in a 2018 report on critical minerals.

While antimony's cosmetic status has waned over the past five millennia, the metalloid's ability to resist heat and corrosion, make stronger lead alloys, produce clearer glass for high-tech devices, and store renewable energy has created new uses for the ancient metal.

A wide array of American industries, including the defense and energy sectors, are taking advantage of antimony's unique properties.

"Today, antimony is used in lead-acid storage batteries for backup power and transportation; in chemicals, ceramics, and glass; in flame-retardant materials; and in heat stabilizers and plastics," according to the USGS.

Despite having significant reserves of stibnite, the U.S. depends on other countries, primarily China, for more than 80% of its supply of this critical mineral. The balance of American supply comes from recycling and refining concentrates imported from Italy, China, India, and Mexico.

"China continued to be the leading global antimony producer in 2020 and accounted for more than 52% of global mine production," USGS inked in its 2021 Mineral Commodity Summaries report.

Due to America's heavy reliance on imports, coupled with antimony's traditional and emerging applications, USGS recently ranked stibnite as the No. 10 most critical mineral to the U.S. when it comes to supply risk.

Idaho and Alaska have stepped up to meet America's strategic antimony needs in the past, and host rich deposits of the heat-resisting metal that could help fill current and future critical needs.

This is largely due to the lives of countless American troops that were saved during the war by an antimony-based fireproofing compound that was applied to tents and vehicle covers.

When combined with a halogen – fluorine, chlorine, bromine, or iodine – antimony trioxide suppresses the spread of flames.

"Antimony is also vital to our military's effectiveness and has been since it was labeled as crucial to the war effort during World War II," U.S. Army Major General James (retired) "Spider" Marks penned in a 2020 column published in The Washington Times.

Over the eight decades since the end of World War II, antimony continues to save innumerable lives – from soldiers in the field to babies in the nursery – by lending its flame-resistant properties to mattresses, toys, electronic devices, aircraft, and automobile seat covers.

In addition to its widespread heat-resistance applications, antimony imparts increased hardness and mechanical strength into an alloy known as antimonial lead.

Bullets and shot, bearings, electrical cable sheathing, printing machines, solders, and pewter are among the products made of alloys that contain some amount of antimony.

The most common application for antimonial lead, however, is improving the plate strength and charging characteristics in the lead-acid batteries that have been used to start most internal-combustion-engine vehicles for more than a century.

Antimony is also used to make high-quality glass used by both civilians and soldiers. For example, a small amount of antimony oxide has the ability to remove bubbles and make super-clear glass used to make lenses for binoculars and similar optical equipment, as well as the glass screens of smartphones and other electronic devices.

The majority of this antimony is recycled, which accounts for essentially all of America's supply of the metal that is not imported.

While lead-acid battery usage is expected to decline as electric motors take the place of ICE engines in the vehicles traveling global highways, antimony is finding its way into new applications in next-generation batteries that can efficiently store electricity at the grid scale.

Known as liquid-metal batteries, this relatively new form of energy storage was developed at the Massachusetts Institute of Technology (MIT) in Cambridge.

The Ambri battery has a calcium alloy anode, a molten salt electrolyte, and an antimony cathode.

At room temperature, Ambri's cell is non-conductive and its materials are solid. Once heated to 500 degrees Celsius (932 degrees Fahrenheit), however, the minerals and metals melt and become active. The passing of ions through the electrolyte as the battery charges and discharges keeps the metals molten, eliminating the need for auxiliary heating or cooling.

All these liquids are stored in a single stainless-steel tank without the need for dividers because, like oil and water, they have different densities and do not mix.

Ambri says these batteries are less expensive to manufacture, work in a wider range of climatic conditions, last longer, and are safer than their lithium-ion counterparts.

TerraScale, a data center development firm that prioritizes sustainability and cybersecurity, is leveraging these advantages through the installation of 250 megawatt-hours of Ambri liquid-metal batteries to store solar energy at its Energos Reno project in Nevada.

This is a major step in commercializing Ambri's energy storage technology and bolstering demand for the antimony that goes into its liquid-metal batteries.

Many of North America's richest gold districts also host healthy amounts of antimony, but the latter fire-resistant energy metal is often discarded in favor of the more valuable precious metal. This dynamic, however, reversed at gold mines in Idaho and Alaska when antimony's strategic value increased during the World Wars.

"During the Second World War, when the U.S. faced a crisis because it didn't have sufficient antimony of its own – let that be a lesson here – and so it launched the development of the Stibnite Mine in Idaho," said Chris Ecclestone, a mining strategist with Hallgarten & Co. in London.

From 1941 to 1945, Stibnite Mine produced more antimony and tungsten than any other mine in the U.S. – accounting for 90% of the antimony and 40% of the tungsten produced during this wartime effort.

This Idaho mine has been credited for saving millions of lives and helping to bring World War II to an end.

"In the opinion of the munitions board, the discovery of that tungsten at stibnite, Idaho, in 1942 shortened World War II by at least 1 year and saved the lives of a million American soldiers," according to the March 7, 1956 U.S. Senate Congressional Record.

The lives saved came at an environmental cost to the Yellow Pine area of Idaho where the Stibnite Mine was located. Perpetua Resources Corp., however, plans to help clean up the environmental legacy of the mine while also producing the antimony critical to the U.S.

"America has the brainpower, spirit of innovation and work ethic to continue to solve some of the world's toughest problems. However, we lack the minerals and materials we need to bring those solutions to life," said Perpetua Resources CEO Laurel Sayer. "Perpetua Resources can play a key role in re-establishing domestic antimony production and protecting America's energy, technology and defense future."

According to a 2014 prefeasibility study, the Stibnite Mine being permitted by Perpetua would produce 99.85 million lb of antimony, 4.04 million ounces of gold, and 2.07 million oz of silver over a 12-year mine life.

Perpetua hopes to finalize the federal permitting process by the end of this year and begin the work of restoring legacy environmental damage and building a modern era Stibnite Mine in 2022. Commercial production of antimony, gold, and silver from the Idaho mine is expected to begin in 2026.

"There is an exciting opportunity to rebalance antimony supplies away from China and break their stranglehold on the metal," Ecclestone said.

For more than a century, Alaska's gold districts have been hailed for their potential to host economically viable deposits of antimony.

"It has long been known that stibnite, the sulfide of antimony and the principal source of that metal, is widely distributed in Alaska," Alfred Brooks penned in a 1917 report, Antimony deposits of Alaska.

Brooks' early 20th-century investigation identified 67 stibnite occurrences in Alaska, most of which are found in areas famed for their gold – Nome, Fairbanks, and Iditarod.

The first record of primary antimony mining in Alaska was the Sliscovich Mine about 30 miles northeast of the gold rush mining town of Nome.

First opened in 1906, Sliscovich was positioned to provide a domestic source of antimony at the onset of World War I, an event that sparked stibnite mining across much of Alaska.

"WWI created considerable demand for antimony," James Barker, who investigated much of Alaska's critical minerals potential while working as a geologist for the U.S. Bureau of Mines, told Data Mine North.

While roughly 100 tons of ore shipped from Sliscovich in 1914 and 1915 contained about 35% antimony, the value of the gold and silver in this ore outweighed the critical mineral.

While Sliscovich and other mines near Nome provided some antimony for America during World War I, larger loads of higher-grade concentrates were sent from mines around Fairbanks, in the state's Interior region.

"In 1915 antimony ore was mined on four properties in the Fairbanks district at the Scrafford, in Treasure Creek basin; the Stibnite, in Eva Creek basin; the Gilmer, in Vault Creek basin; and at Chatham Creek mine," Brooks wrote. "All the operations were on a small scale and consisted chiefly of open cuts. The total shipments of stibnite from the district during 1915 were 685 tons, which probably averaged 58% antimony."

Scrafford, the most prolific of these Fairbanks area stibnite mines, has been estimated to produce 2,700 tons of ore containing greater than 50% stibnite over the years.

Former U.S. Bureau of Mines geologist Barker said the lump antimony mined from this hand operation north of Fairbanks "was sacked and transported by cable tram up to the ridge top and then by horse-drawn wagons into Fairbanks to be shipped south by river steamer."

Today, this property near Kinross Gold Corp.'s Fort Knox Mine is being explored primarily for its gold potential. 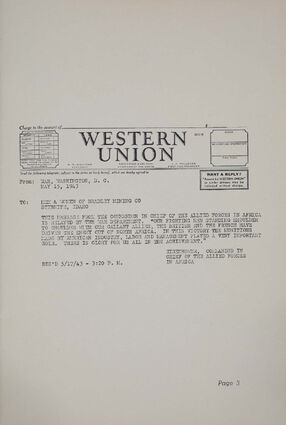 A telegram from General Dwight Eisenhower to the workers at the Stibnite Mine thanking them for supplying the World War II war effort (Click to expand).

The antimony potential found in Alaska trends eastward from Fairbanks and into Canada's Yukon, where one mine between Haines Junction and Whitehorse produced the critical mineral during the 1960s and veins containing an estimated 700 million lb of stibnite remain.

Much like what Perpetua proposes for the Stibnite Mine in Idaho, antimony recovered from deposits in Alaska or the Yukon will likely be a byproduct of mining the gold these northern mining jurisdictions are best known for.

"Enhanced recovery of antimony from precious metal deposits may represent the most readily available source of antimony if demand were to increase rapidly," USGS penned in its 2018 critical minerals report.

If molten-salt batteries gain traction for utility-scale storage of renewable energy, more gold miners will likely investigate the potential of producing the critical antimony that often accompanies the precious metal.