Building a US critical minerals strategy 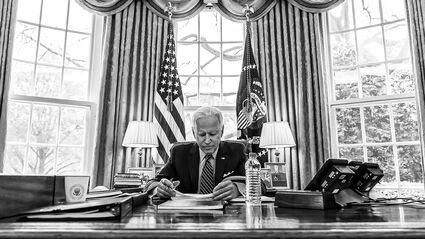 President Biden talks on a call with Canadian Prime Minister Trudeau. The White House is working closely with Canada and Australia to secure minerals critical to U.S. supply chains.

A heavy reliance on imports for a long list of minerals and metals critical to American supply chains could be a stumbling block for the Biden administration's ambitious "Build Back Better" agenda.

"From the largest infrastructure plan since the Eisenhower interstate highway system, to an aggressive plan for a national energy transition, the Biden administration's agenda will require an immense amount of minerals," National Mining Association President and CEO Rich Nolan inked in a June letter.

The United States, however, depends on foreign countries for more than 50% of its supply of 46 out of 63 minerals, metals, and groups of elements tracked by the U.S. Geological Survey, including 100% import-reliant for 17 of them.

The list of mined commodities for which the U.S. is reliant on foreign nations for most of its supply is littered with high-tech minerals and metals needed for renewable energy, electric vehicles, consumer electronics and military hardware – cobalt, gallium, graphite, indium, manganese, niobium, rare earths, tellurium, and vanadium are among the high-tech and energy elements at the top of this list.

In addition to the inherent risks to American supply chains, social and environmental baggage often accompanies critical minerals and metals imported from countries with lessor regard for human rights and the environment.

"American manufacturing and technological development can't be beholden to the whims of foreign nations, especially when we have these resources in our own back yard," said Sen. Kevin Cramer, R-North Dakota. "If we don't develop critical minerals in the United States, we force ourselves to rely on adversarial countries like China who have little-to-no labor or environmental protections."

This dependence on imports into American supply chains is further compounded by a global competition for the minerals and metals needed for the low-carbon transportation and energy transition to meet the goals of the 2015 Paris Agreement.

A typical EV requires six times the mineral inputs of a conventional internal combustion engine car and an onshore wind plant requires nine times more mineral resources than a gas-fired plant, according to "The Role of Critical Minerals in Clean Energy Transitions" report published by the International Energy Agency earlier this year.

With global EV sales expected to top 80 million per year by 2040 and international governments transitioning their power grids to low-carbon power, this amounts to a massive growth in demand for battery metals, other critical minerals, and even base and precious metals.

Further details on the forecasted demand for the minerals required for EVs and renewable energy can be read at Soaring critical energy minerals demand in this edition of Critical Minerals Alliances.

This challenge is not lost on the Biden administration, which addressed the massive quantities of cobalt, graphite, lithium, manganese, and nickel that will be needed for the batteries that will power America's transition to EVs and renewable energy.

"With the global lithium battery market expected to grow by a factor of five to ten by 2030, it is imperative that the United States invests immediately in scaling up a secure, diversified supply chain for high-capacity batteries here at home," the White House penned in a June 8 statement on battery supply chains. "That means seizing a critical opportunity to increase domestic battery manufacturing while investing to scale the full lithium battery supply chain, including the sustainable sourcing and processing of the critical minerals used in battery production all the way through to end-of-life battery collection and recycling."

To seize this opportunity, the Biden administration plans to invest heavily in both domestic and international production and processing of critical minerals.

In preparation for the "sustainable sourcing and processing of the critical minerals used in battery production all the way through to end-of-life battery collection and recycling," the White House has put together a working group of federal agencies led by the U.S. Department of Interior and supported by the White House Office of Science and Technology Policy to identify sites where critical minerals can be responsibly produced and processed in the U.S.

"This working group will collaborate with the private sector, states, Tribal Nations, and stakeholders – including representatives of labor, impacted communities, and environmental justice leaders – to expand sustainable, responsible critical minerals production and processing in the United States," the Biden administration penned in a June report outlining plans to strengthen American supply chains.

To ensure that domestic critical minerals fed into American supply chains meet the sustainability criteria, the White House is asking Washington D.C. lawmakers to establish a new mining regulatory framework with strong environmental standards throughout the entire mine life, from development to reclamation.

"We recommend Congress develop legislation to replace outdated mining laws including the General Mining Law (GML) of 1872 governing locatable minerals (including nickel) on federal lands, the Materials Disposal Act of 1947 to dispose of minerals found on federal lands, and the Mineral Land Leasing Act of 1920 among others," the Biden administration wrote. "These should be updated to have stronger environmental standards, up-to-date fiscal reforms, better enforcement, inspection and bonding requirements, and clear reclamation planning requirements."

The three laws cited by the White House, however, are not related to the environmental regulations governing mining in the U.S. Instead, they detail how federal lands are prospected and staked (Mining Law of 1872); how minerals on federal lands are sold or leased (Materials Disposal Act of 1947); and royalties on mineral products on federal lands (Mineral Land Leasing Act of 1920).

Much of the federal regulations relating to environmental standards and permitting processes for mining projects in the U.S. are found within the Clean Water Act and National Environmental Policy Act.

The NEPA process is both renowned for its strong environmental protections and infamous for the near-decade it takes for a large domestic mine in the U.S. to gain permits under its process.

"It takes an average of seven to 10 years to secure a U.S. mine permit. This, compared to the two years it takes in countries with similar regulations like Canada or Australia, makes investing in American mining projects a challenge," according to Nolan.

The White House sees these allied countries with more efficient mine permitting processes as increasingly important and secure suppliers of minerals and metals into American supply chains.

While the NMA president agrees that importing minerals from Canada, Australia, and other allies is necessary, the U.S. also needs to emulate the effective and efficient permitting systems of the global mining powerhouses.

"By simply increasing coordination and reducing duplication between federal and state agencies, setting, and adhering to schedules for permit reviews, and transparently tracking progress to provide accountability, the U.S. can become competitive again," Nolan wrote.

President Biden has signaled that he too would like to see the process for permitting domestic mines feeding minerals and metals into U.S. supply chains streamlined.

As such, the White House has directed a second federal interagency working group that includes experts in mine permitting and environmental law to fully explore "opportunities to reduce time, cost, and risk of permitting without compromising strong environmental and consultation benchmarks."

The mine permit streamlining opportunities being investigated by the Biden administration echo the objects of legislation recently introduced by Sen. Lisa Murkowski, R-Alaska – S.1352: "A bill to improve the quality and timeliness of federal permitting and review processes with respect to critical mineral production on federal land, and for other purposes."

"America's reliance on foreign countries for the production and recycling of our critical minerals is a vulnerability to our national security, a disadvantage to our economy, and a hindrance to our global competitiveness," Alaska's senior senator said in April, when the bill was introduced. "By improving the permitting processes we have in place, we are creating greater opportunity for America to rebuild a robust domestic critical minerals supply chain."

To improve the efficiency and effectiveness of the U.S. mine permitting process, Murkowski's bill would require federal agencies to:

• Establish clear timelines for decisions regarding applications, operating plans, leases, licenses, permits, and other use authorizations for critical mineral-related activities on federal land.

• Create clear, quantifiable permitting performance goals and to track progress toward those goals.

• Engage in early collaboration with agencies, stakeholders, project sponsors, and consult with state, local, and tribal governments to resolve concerns.

• Provide clear and logical ways to make the process cost-effective and timely.

"It's imperative to our national security and economic growth that the United States have a robust domestic critical mineral supply chain," said Senator Thom Tillis, R-North Carolina, one of the 11 cosponsors of the mine permitting bill introduced by Murkowski. "This commonsense legislation is key to achieving that goal."

Ensuring America has a robust domestic supply of critical minerals has also become a priority for lawmakers out of Texas, a state that is emerging as a hub for renewable energy, battery manufacturing, and critical minerals.

"Our capacity to manufacture essential technology for our national defense and economic prosperity will remain in danger as long as we remain dependent on China," Gooden said upon reintroducing the RARE act in April. "We must start producing these critical minerals here at home and producing in America first."

Under the legislation, companies that are mining, reclaiming, or recycling the 17 rare earth elements or five battery minerals and metals – cobalt, graphite, lithium, manganese, and vanadium – in the U.S. would be able to treat expenditures as operating costs that are fully deductible from their taxes.

The bill also offers a 200% tax deduction to U.S. buyers of these critical minerals and metals extracted from deposits in the U.S. 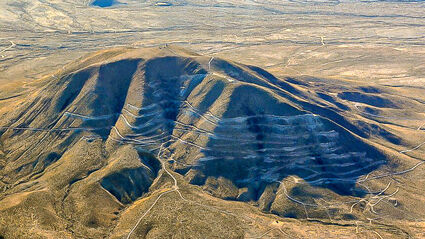 Rising out of the Texas desert about 85 miles southeast of El Paso, USA Rare Earth and Texas Mineral Resources' Round Top hosts large quantities of rare earths, lithium, and other minerals and metals critical to American supply chains.

In addition to tax incentives, the RARE Act would require the Department of the Interior to establish a pilot grant program for the domestic development of critical minerals and metals.

Capped at $10 million for any grant award, the legislation instructs the Interior to prioritize projects determined to be economically viable over the long term. In addition, at least 30% of the grant funds must be allotted to projects focused on recovering critical minerals and metals from secondary sources such as mine tailings or recycling products with rare earths or battery metals.

The Texas congressmen, which come from opposite sides of the aisle, said reshoring America's critical minerals supply should not be a partisan issue – both former President Donald Trump and President Biden have recognized the need for our government to encourage domestic production of these basic building blocks of modern technologies.