Scandium finds its own way in NA markets 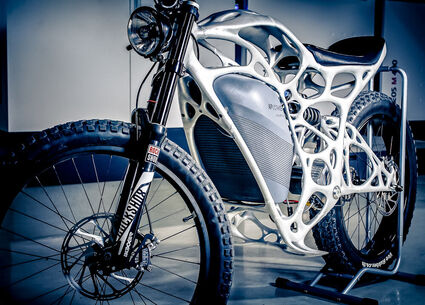 Metal 3D printing is among the emerging uses for scandium. Weighing in at just 77 lb, this motorcycle was printed from a scandium-aluminum-magnesium alloy known as Scalmalloy.

Scandium is an adopted brother to the family of 15 lanthanides that make up the suite of elements known as rare earths.

While it may not have quite as strong a chemical bond to its adopted lanthanide siblings as they do to each other, scandium does possess similar characteristics and is almost always found at the same geological gatherings (deposits) as the rest of its rare earth family.

Beyond its close chemical and geological ties to rare earths, scandium is considered a critical mineral in its own right due to its traditional alloying qualities and emerging high-tech properties.

The traditional use for this critical metal is as an ingredient in lightweight and strong aluminum-scandium alloys for aerospace components and sports equipment. In recent years, however, solid oxide fuel cells have supplanted alloys as the primary use for this metal. Ceramics, electronics, lasers, lighting, and 3D metals printing are emerging areas of demand for scandium.

The United States is currently 100% dependent on imports for this alloying and technology metal that sits on the U.S., Canada, and European Union's critical mineral lists.

Though scandium is often associated with rare earths, most of the global supply of this alloying metal is recovered as a byproduct of titanium, zirconium, cobalt, and nickel production.

With the installation of a scandium recovery facility at a titanium and iron facility in Canada, Rio Tinto is the first commercial-scale producer of high-quality scandium oxide in North America.

Looking to produce roughly three metric tons of scandium per year, which is about 20% of the current global market, Rio Tinto is investing US$6 million for the construction of the first module of a commercial-scale demonstration plant at its Rio Tinto Fer et Titane (iron and titanium) metallurgical complex in Sorel-Tracy, Quebec.

Already proven at the pilot scale, this plant will extract high-purity scandium oxide from the waste streams of titanium dioxide production at its Lac Tio mine near Havre-Saint-Pierre, Quebec.

"We are proud to offer North America's first reliable supply of scandium oxide using an innovative and sustainable process, with the construction of this new plant," said Rio Tinto Iron and Titanium Managing Director Stéphane Leblanc.

The provincial government is contributing approximately US$650,000 to the scandium recovery project through the Quebec Plan for the Development of Critical and Strategic Minerals.

"The step just taken today by Rio Tinto Fer et Titane has the potential to position Quebec as a world leader in the extraction and commercialization of scandium," said Quebec Minister of Economy and Innovation Pierre Fitzgibbon said in January. "With this project, Quebec will become the largest producer of this rare metal, which will have a major impact on our exports and Quebec's supply chains, particularly in key sectors such as the electrification of transportation and aerospace."

Rio Tinto said the scandium recovered from the new plant will also dovetail with its aluminum operations in the Saguenay–Lac-Saint-Jean region of Quebec. 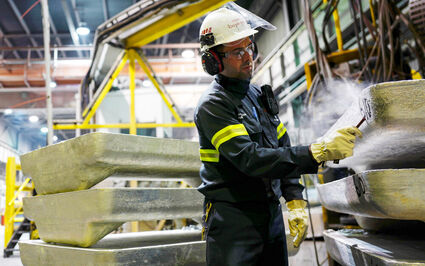 To fully realize this potential, Rio Tinto has formed Element North 21, a business to commercialize its scandium products.

Rio Tinto said it will be able to scale up scandium production to meet market demands by adding additional modules to its scandium recovery plant in Quebec.