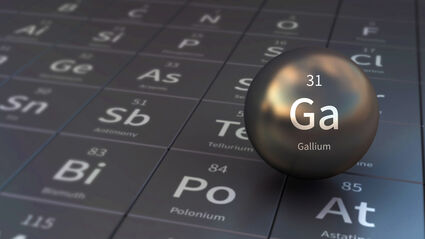 "The development of gallium arsenide as a direct band-gap semiconductor in the 1960s led to what are now some of the most well-known uses of gallium – in feature-rich, application-intensive, third- and fourth-generation smartphones and in data-centric networks," the U.S. Geological Survey penned in a 2018 report on the 35 minerals and metals considered critical to the United States.

The advent of 5G-capable telecommunication networks is pushing demand for this tech metal even higher.

And this new demand is driving up the price for the semiconductor metal with a melting point so low that it will turn into a liquid in the palm of your hand.

The USGS estimates that American manufacturers used roughly 15,000 kilograms of gallium for the circuitry of smartphones and other computers; optoelectronic devices such as LEDs, laser diodes, photodetectors; and solar cells during 2020.

While integrated circuits in next-generation computers are anticipated to need increasing amounts of gallium, thin-film photovoltaic panels delivering electricity to homes and businesses is an emerging driver of demand for this critical metal.

Copper-indium-gallium-selenide (CIGS) solar cells can absorb much more sunlight than traditional cells, which means that a much thinner film is needed. These photovoltaic films can be applied on flexible materials and are less expensive to produce.

Despite these advantages, CIGS solar panels are much less efficient at converting electricity than their more rigid silicon-based counterparts. As such, CIGS only make up about 2% of the solar panel market. This is expected to climb with improved solar efficiency.

Now, scientists are looking at also using gallium as means of slowing the degradation of silicon-based solar panels.

Boron, a material traditionally added to silicon to convert sunlight into energy, has one big drawback – it also causes the panel to collect impurities that degrade performance over time. Replacing boron with gallium, however, substantially reduces this degradation.

While this fact has been known for two decades, a patent prevented scientists from pursuing gallium-doped silicon solar panels. With the patent expired, researchers at the University of New South Wales in Australia are now continuing the research into longer-lasting gallium-doped silicon solar panels, which could add new market demands for the tech metal.

"Because of the likelihood of rapid growth in the areas of photovoltaics and clean energy technologies, a potential exists for bottlenecks in the gallium supply pipeline," USGS inked in its critical minerals report.

And much like the rare earths that have captured global attention in recent years, China dominates the gallium mining sector, and the U.S. is 100% dependent on imports for the semiconductor metal.

According to the USGS, China produced 290,000 kilograms of gallium during 2020, or roughly 97% of the gallium mined globally last year.

Ironically, breaking America's dependence on China for rare earths through the development of deposits in the U.S. and Canada could also provide a steady and secure supply of gallium.

Like many other critical minerals and metals, gallium is typically recovered as a byproduct of mining more common metals – primarily aluminum, zinc, and sometimes copper.

While there are deposits of these base metals in both the U.S. and Canada enriched with gallium, two North American rare earths deposits – Round Top in Texas and Alces Lake in Saskatchewan – host richer stores of this critical metal.

Being advanced under a joint venture between USA Rare Earth LLC (80%) and Texas Mineral Resources Corp. (20%), the Round Top rare earths project in Texas is rich in a suite of critical minerals, including gallium.

According to a 2020 assessment by USGS, the Round Top deposit hosts a staggering 36,500 metric tons (36.5 million kg) of gallium, or enough to meet U.S. needs for roughly 2,281 years at the consumption rate in recent years.

This enormous lode of gallium, however, is in low concentrations in a very large deposit.

The continuous ion exchange and continuous ion chromatography (CIX-CIC) technology used to recover the rare earths mined from Round Top has also been designed to extract and purify the lithium, hafnium, zirconium, gallium, and beryllium also found in the critical Texas deposit.

Earlier this year, the Round Top joint venture began mining of a 20,000-metric-ton bulk sample to provide material for a feasibility study, as well as a demonstration plant that scales up a Colorado CIX-CIC pilot plant used to prove and refine the critical metals extraction and purification technology.

"This new plant will process leach solutions from the Round Top ore using continuous ion exchange and continuous ion chromatography (CIX-CIC) to separate and purify up to a total of 26 different recoverable elements," according to USA Rare Earth.

While not as large or advanced as Round Top, Appia Energy Corp.'s Alces Lake rare earths project in northern Saskatchewan may host the highest-grade gallium deposit in North America.

An electron microprobe study conducted by the Saskatchewan Research Council successfully demonstrated that the rare earths-enriched monazite mineral from two separate zones and trends at Alces Lake was also enriched with gallium.

Following up on this initial study, Appia had select samples with high-grade rare earths from eight zones re-assayed to determine the extent of gallium mineralization across the property.

By way of example, it is estimated that the ore intermittently mined over a century at Apex Mine in Utah, which was the only primary mined source of gallium and germanium in the U.S. before it was closed in 2011, averaged about 0.032% gallium, with locally occurring grades up to 0.148% gallium.

(USGS estimates that 79 metric tons of gallium remain at the shuttered Apex Mine.) 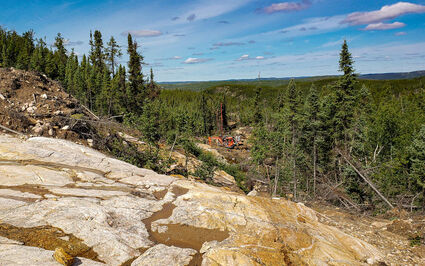 While a resource has yet to be calculated for the high-grade zones at Alces Lake, it is expected that the initial resource will confirm one of the world's highest-grade deposits of rare earths and gallium.

This expectation is based on drill intercepts of 15.6 meters averaging 16.1% total rare earth oxides and 2.7 meters of 31% TREO, which indicate the project could host a resource with grades multiples above the 1.89% average for REE deposits worldwide.

"The presence of gallium in the high-grade REO system on the Alces Lake property helps distinguish the property as a potential world-class asset for high-valued critical elements required for sustainable production of advanced technological applications," said Kozak.