Titanium demand drivers are in whitening 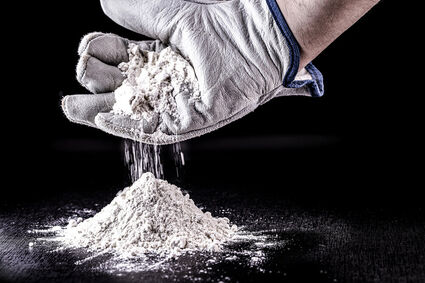 More than 90% of this mineral mined each year is used to impart a stark whiteness to paints and a surprising array of other consumer products, such as dairy products like milk, mozzarella, and cottage cheese.

Lightweight, strong, and resistant to corrosion, titanium is best known for the properties it lends to rockets, aircraft, and high-performance sports equipment. Only about 3% of the more than 8 million metric tons of titanium minerals mined each year globally, however, go into high strength-to-weight ratio and corrosion-resistant alloys. What does drive the mass majority of the demand for this critical mineral is "enwhitening."

According to the United States Geological Survey, more than 90% of the titanium mined each year is used to impart a stark whiteness to a surprisingly wide variety of consumer goods we use every day.

"Titanium is different than most other metallic elements in that it is mined primarily to satisfy demands for a chemical product – titanium dioxide for pigment – rather than for the metal itself," the U.S. Geological Survey penned in a 2018 report on the durable mineral.

Because this titanium dioxide pigment is used to color paints, paper, plastic, cosmetics, and even dairy products, the demand for this whitening metal is tied closely to consumer buying.

"Demand in the first half of 2020 decreased sharply owing to restrictions implemented to limit the spread of the COVID-19 virus," the USGS penned in its 2021 annual mineral commodities report. "In the second half of 2020, titanium producers reported that demand was recovering, led by demand for TiO2 in paints and coatings."

Titanium dioxide has three qualities that make it an ideal material for creating whiter whites – it is white, it is safe for human consumption, and it scatters light extremely well.

"Titanium dioxide has properties of whiteness, opacity, and chemical inertness that make it especially suitable for use as pigment to impart a durable white color to paints, paper, plastic, sunscreen, toothpaste, and wallboard," the USGS inked in its 2018 titanium report.

Most high-quality white paints you buy in the hardware store today contain "titanium white," a pigment made from this white material.

And titanium dioxide is even used to make foods such as skim milk and cottage cheese whiter and creamier looking.

Because it is used in such a wide variety of products, most U.S. consumers use a product containing titanium dioxide every day.

While we typically do not think about titanium dioxide in our toothpaste or milk, many of us are much more familiar with the exceptional weight-to-strength ratio that titanium metal lends to high-performance sporting gear such as bicycle frames, golf clubs, tennis rackets, and goalie masks.

Medical implants, such as hip and knee replacements, also take advantage of titanium metal's lightweight durability, along with an inertness that allows it to be added to milk.

While aluminum is about 60% lighter than titanium, it is only about half as strong, corrodes much easier, and does not hold up to heat as well. Since it is important not to break or melt down at 20,000 feet, titanium is the metal of choice for many aircraft parts.

And when it comes to aircraft performance, the lighter the better.

"In the 1950s, the titanium metal industry was established primarily in response to the emerging aerospace industry, which used it in the manufacture of airframe structural components and skin, aircraft hydraulic systems, air engine components, rockets, missiles, and spacecraft," according to ASM Aerospace Specification Metals Inc.

In addition to being lightweight and strong on its own, titanium alloys with aluminum, iron, nickel, molybdenum, vanadium, and other metals – which makes it ideal for a wide array of aircraft parts and military equipment.

The ability to withstand temperatures from subzero to above 1,100 degrees Fahrenheit also makes titanium an increasingly useful metal for jet and rocket engine parts.

According to the USGS, an estimated 80% of titanium metal consumed in the U.S. during 2019 was used in aerospace applications; the balance was used in armor, chemical processing, marine hardware, medical implants, power generation, and other applications.

There are no completely satisfactory substitutes for titanium when it comes to many of its aerospace, marine, and military applications.

While titanium is the ninth most abundant element in the Earth's crust, for the most part, it is too widely dispersed to be economically mined. There are a few titanium minerals, however, that contain higher concentrations of this element. About 90% of the world's titanium is found in one such mineral, ilmenite, made up of iron and titanium oxide.

Roughly 100,000 metric tons of titanium mineral concentrates were produced in the U.S during 2020. This production came from mining and tailings in Florida, Georgia, and South Carolina.

This heavy reliance on imports, coupled with the broad applications – from skim milk to stealth fighters – are the reasons titanium is found on both the U.S. and Canada's critical mineral lists.

The sparse quantities of titanium mined in the U.S. and Canada, not being named as a top American supplier last year, belies the amount of titanium resources available in North America.

While Canada was not on the list of the top U.S. titanium suppliers during 2020, the mineral-rich neighbor did produce roughly 680,000 metric tons of titanium mineral concentrates last year.

Much of this production came from Rio Tinto's Lac Tio mine near Havre-Saint-Pierre, Quebec, which is home to the largest ilmenite deposit in the world. Ilmenite from this mine is processed into iron and titanium at its Rio Tinto Fer et Titane metallurgical complex in Sorel-Tracy, Quebec.

Rio Tinto recently invested US$6 million for the construction of the first module of a commercial-scale demonstration plant that will extract high-purity scandium oxide from the waste streams of titanium dioxide production at Rio Tinto Fer et Titane.

Further details on scandium and the Rio Tinto's demonstration plant can be read at Scandium finds its own way in NA markets in this edition of Critical Minerals Alliances.

Numerous other iron-titanium oxide deposits can be found in eastern Canada and extending into northeastern U.S. Most of these, however, have lower titanium grades.

Some of these deposits, however, also happen to be rich in vanadium, a metal that is gaining popularity as an ingredient in redox flow batteries for the grid-scale storage of electricity from intermittent sources such as wind and solar.

With flow batteries being viewed by many researchers and governments, including the Biden administration, as a solution to the need for large-scale storage of renewable energy, the growing demand for vanadium could bring more titanium into the markets as a byproduct of the emerging battery metal.

VanadiumCorp Resource Inc., which has positioned itself along the entire vanadium-based energy storage supply chain, is advancing titanium-enriched vanadium deposits in Quebec.

Though VanadiumCorp is most interested in the vanadium portion of this deposit, the mining of the battery metal is expected to offer a significant new supply of titanium.

In the U.S., coastal heavy mineral sand deposits in the southeastern states of Florida and Georgia are rich in titanium minerals.

Chemours Titanium Technologies, one of the world's largest producers of titanium dioxide, is investing roughly US$86 million into a heavy mineral sand project in Georgia that is producing three critical minerals – titanium, zircon, and rare earth elements.

"It's with great excitement that we expand our minerals operations into the state of Georgia following 71 years of successful mining in Florida," Chemours Titanium Technologies President Bryan Snell said during the September 2020 announcement of the new mine.

These heavy mineral sands being mined in Georgia also happen to be enriched in monazite, a mineral that is rich in the suite of 17 rare earth elements, especially the highly sought-after magnet REEs neodymium and praseodymium.

After extracting the titanium and zircon from these sands, Chemours is shipping the REE-enriched monazite to Energy Fuels Inc.'s White Mesa Mill in Utah to create rare earths carbonates that will be separated into individual rare earths at Neo Performance Materials Inc.'s Silmet plant in Estonia.

The success of this three-company collaboration to produce rare earths from monazite mined in America opens the door for a complete REE supply chain in the U.S. and Europe.

"Chemours is pleased to support the developing rare earth supply chain in the United States," said Snell. "Our partnership with Energy Fuels came from a deliberate process of customer selection and developing sustainable solutions for our critical minerals."

Producing titanium dioxide that imparts a whiteness and brightness to "brilliant paints, pristine plastic, gleaming laminates, and durable automotive and aerospace coatings," however, remains the main product of Chemours newly established mine in Georgia. 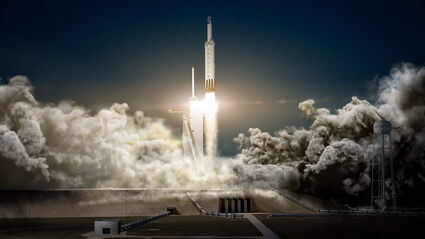 Launch of a SpaceX Falcon Heavy rocket and Dragon spacecraft. The aerospace sector is by far the largest consumer of titanium metal.