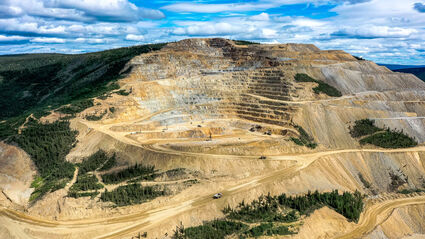 Crews stacked 1.14 million metric tons of ore from the Eagle Mine averaging 0.98 g/t gold on the heap leach pad in August.

Victoria Gold Corp.'s Eagle Gold Mine produced 20,744 ounces of gold in August, a month record for Yukon's largest mine.

The recently established open pit mine and heap leach recovery operation at Eagle produced 58,899 oz of gold over the first six months of 2021. While this is a 51% increase over the same period in 2020, it was well below the pace needed to achieve the roughly 200,000 oz/year production envisioned.

Gold recoveries at heap leach systems in northern climates, such as Eagle and Kinross Gold Corp.'s Fort Knox Mine in Alaska, taper off during the cold weather months of winter and into spring. This, coupled with a curtailment of ore stacking over the first 90 days of each year, gold production at Eagle is expected to be strongly weighted to the second half of the year.

As expected, gold production at Eagle has been trending higher since mid-year. During July, the operations recovered 14,717 oz of gold before hitting record monthly production in August.

Crews stacked 1.14 million metric tons of ore on the heap leach pad in August. At an average grade of 0.98 grams per metric ton gold, the grade of this ore is roughly 14% higher than the 0.86 g/t average so far this year.

"The Eagle Gold Mine produced a record 20,744 ounces gold in August with more than 1 million tonnes of ore stacked on the heap leach pad in each of July and August, setting the stage for strong Q3 operational performance," said Victoria Gold President and CEO John McConnell. "Additionally, exploration remains in full swing and we look forward to providing results in the near future."

The 2021 exploration program across the larger Dublin Gulch property is focused on establishing a maiden resource at Raven, a gold target about 13 kilometers (eight miles) east of Victoria's Eagle Mine; further exploration at Lynx, a high priority prospect about nine kilometers (5.6 miles) southeast of the Eagle Mine; and work at the past-producing Rex-Peso high-grade silver target just west of the Eagle Gold Mine.

The 2021 exploration at Lynx, began with a systematic surface trench program followed by geological mapping and sampling across the 600 meters of defined anomalous gold mineralized trend. So far this year, eight holes of a planned 14-hole, 2,500-meter drill program have been completed at Lynx.

Another 12 holes for 2,100 meters of drilling have been completed this year at Rex-Peso, which hosts high-grade silver veins just west of the Eagle Mine. These veins were mined by previous operators in the 1960s with only limited exploration conducted beyond the footprint of the underground workings. 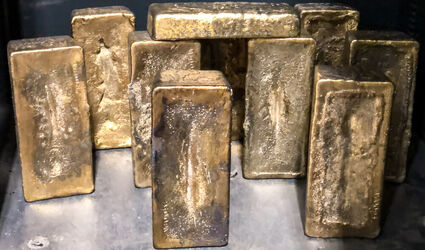 A record 20,744 oz of gold was poured at Eagle during August.

Assays are pending from all the holes drilled this year at Dublin Gulch.