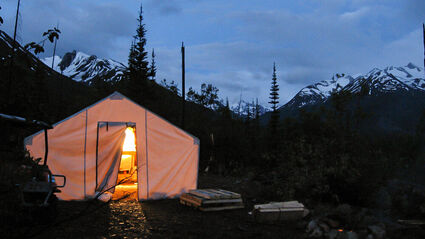 A new PEA outlines a slightly new vision for developing a mine at the Schaft Creek copper-gold-silver-molybdenum project.

A preliminary economic assessment prepared for Copper Fox Metals Inc. outlines a slightly new vision for developing a mine at Schaft Creek, a large copper-gold-silver-molybdenum project being advanced under a joint venture between Teck Resources Ltd. (75%) and Copper Fox (25%).

The operation outlined in the new PEA is forecast to produce roughly 5 billion pounds of copper, 3.7 million ounces of gold, 226 million lb of molybdenum, and 16.4 million oz of silver over 21 years of mining.

The initial capital needed to develop this mine is estimated to be US$2.65 billion, which is roughly 19% lower than the US$3.6 billion for the mine outlined in the 2013 feasibility study. At US$848.7 million, the sustaining capital and closure costs of the Schaft Creek mine outlined in the PEA are also significantly lower than the US$1.2 billion costs detailed in the feasibility study.

With lower capital requirements and higher metals price assumptions – US$3.25 per lb copper, US$1,500 per oz gold, US$10 per lb molybdenum, and US$20 per oz silver – the Schaft Creek mine summarized in the PEA would generate an after-tax net present value (8% discount) of US$842.1 million and after-tax internal rate of return of 12.9%.

It is expected to take about 4.8 years to pay back the initial capital investment to develop the mine.

"The significantly higher investment returns, resulting in part from project enhancements developed over the past two years, and remaining resources in the deposit on completion of the first 21 years of mining, provides a compelling view of the Schaft Creek project's financial potential," said Copper Fox Metals President and CEO Elmer Stewart.

The strip ratio has also been significantly reduced from more than 2-to-1 to 1-to-1.

The PEA recommends a C$23.2 million work program ahead of a prefeasibility study for developing a mine at Schaft Creek. This program would include additional geotechnical drilling, metallurgical testing, and environmental and infrastructure studies. 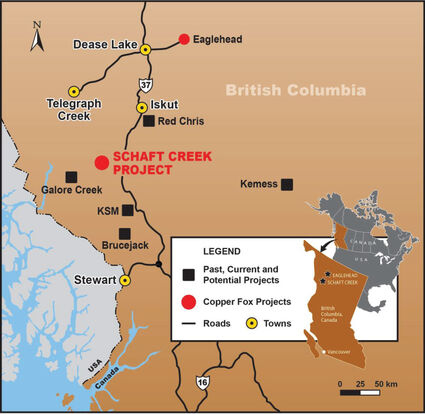 "We are very pleased with the results of the PEA and the recommended program work of C$23 million that could be considered by the operator to advance the Schaft Creek project to the prefeasibility study stage of study and evaluation," said Stewart.

Copper Fox says it is committed to working with Teck to develop and operate the Schaft Creek project in a safe, ethical, and socially responsible manner that maximizes the benefits and economic opportunities for local First Nations and other communities, including employment, training, and using local service providers.

CORRECTION: This article was edited on March 7, 2022 to correctly state that the PEA recommends a C$23.2 million work program ahead of a prefeasibility study for developing a mine at Schaft Creek.