Alaska's newest mine shows the economic, environmental advantages of feeding outside ore through the Fort Knox mill North of 60 Mining News – October 1, 2021 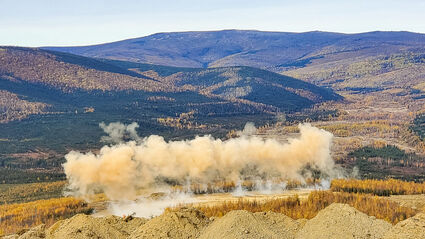 Dust and smoke rises from the first blast during the Sept. 23 groundbreaking at Gil, the first mine to be developed under the Kinross Alaska strategy to process higher-grade gold ore from satellite mines through the mill at Fort Knox.

GIL-SOURDOUGH – With a Sept. 23 blast of explosives that fractured rock in preparation for the start of mining at Gil-Sourdough, Kinross Gold Corp. has raised the bar for mine openings with a literal groundbreaking ceremony at what is now the sixth large-scale metal mine in Alaska.

"I hope this is just the beginning and there are a lot more plays like this and we have a future, not just here at Fort Knox but across the great state of Alaska," Alaska Gov. Mike Dunleavy said to the group of geologists, miners, regulators, and others gathered at the new mine.

Considering everything that mining of the Gil-Sourdough deposits represents – the ability to permit and develop smaller but higher grade open-pit gold mines across much of Alaska without the financial or regulatory burden that comes with building a mill and other infrastructure – the governor's hopes will likely be a reality.

Gil Mine lies at a literal and figurative junction of Alaska's rich gold mining history and future.

From a vantage above Gil, the 27-year-old Fort Knox operation can be seen on the horizon about nine miles to the west and Fairbanks and Fish creeks – placer gold-rich streams mined by Alaska pioneers such as "Wise" Mike Stepovich since 1903 and modern placer gold miners such as Paul Manual and Co.– lie just beyond Kinross and Alaska's newest mine.

"The valley behind me has been mined for well over 100 years," Kinross Alaska General Manager Jeremy Brans told the crowd assembled for the Gil Mine groundbreaking. "So, there is a lot of history here."

A major part of that history is Fairbanks Exploration Company Dredge No. 2, a 128-foot-long, 60-foot-wide, and 12-foot-tall gold mining machine that came to rest just upstream of the Gil-Sourdough deposits after more than a decade of recovering placer aurum from Fairbanks and Fish creeks.

And Dredge No. 2's final resting place is likely not a coincidence.

While tens of thousands of ounces of gold produced downstream of the Gil-Sourdough deposits over the past 120 years, very little was recovered up the valley from Dredge No. 2, indicating that the deposits that will soon be delivering ore to the mill at Fort Knox are likely hardrock sources of the alluvial gold mined from Fairbanks and Fish creeks over the past 117 years.

Though the history associated with Gil is easily observed from a vantage above the mine, the future it represents requires a much wider perspective – a point of view that shows a 300-mile radius around the Kinross Alaska mill.

A look back at Gil's nearly 40-year history helps to bring this wider perspective into focus by offering a glimpse at the economic and environmental advantages of the Kinross Alaska strategy.

Discovered by geologists in the 1980s, Gil-Sourdough has been on Kinross' radar for decades. The global gold miner first became directly involved with the project as a joint venture partner about two decades ago and bought full ownership of the deposit in 2011.

"Gil is a project that is long in the tooth," said Brans.

The reason it has taken so long to develop Gil has to do with its size – 29.5 million metric tons of indicated resource averaging 0.56 grams per metric ton (533,000 oz) gold.

While good enough to keep the Kinross geological and mine development team intrigued, the size and grades were not quite sufficient to justify the expense that comes with building a whole new standalone operation.

"In the past, the concept was to build more infrastructure here, and perhaps another mill or another heap leach," Brans said.

The Kinross Alaska strategy to leverage the underutilized 14-million-metric-ton-per-year mill and storage capacity at Fort Knox to process higher-grade ore mined from projects within a roughly 300-mile radius of the 27-year-old gold operation, however, was a gamechanger for Gil.

"While the Gil deposit has been part of the company resource portfolio for many years, it is only with the recent paradigm shift to leverage the Fort Knox mill and today's continued strong gold price environment that the company sees a timely opportunity for development," Kinross Alaska Eternal Affairs Manager Anna Atchison told Mining News earlier this year.

Under the Kinross Alaska strategy, roughly 10 million metric tons of the larger Gil resource will be mined from smaller pits at an average mined grade of 0.60 g/t (193,000 oz) gold. At current mill recovery rates of around 83%, this ore is expected to contribute roughly 160,000 oz of gold to Fort Knox production over a span of about two years.

"Therefore, it will be more economic and with a smaller environmental footprint," Brans said.

The shrunken environmental footprint and increased economics of Gil underscores the brilliance of the Kinross Alaska strategy and what it could mean for the future of gold mining across a large swath of the state.

Eliminating the need for a mill, heap leach facility, tailings ponds, or other infrastructure, Gil Mine could be equated to a quarry. Even less, when you consider that Gil does not require the crushing and screening plants to size and classify sand and gravel.

As an operation that only needs to blast, dig and load gold-rich rock into trucks for processing at the already established mill and tailings facilities – infrastructure pieces that take much longer to permit and build – means that Gil was elevated from concept to an active mine in just two years.

This is compared to the typical seven to 10 years to permit, plus another four to five years to build and commission, a mine the size of Fort Knox in the United States.

As a result, trucks are expected to be delivering gold-rich Gil ore to the Kinross Alaska mill before the end of the year.

"We are weeks away now from sending the first trucks right down there to Fort Knox," said Brans.

Though the Gil-Sourdough deposits lie on the Fort Knox property about nine miles east of the Kinross Alaska mill, the new Gil Mine there is not simply a satellite of this iconic gold operation that has been the largest taxpayer in the Fairbanks North Star borough and a provider of high wage jobs for many of its residents for the past 27 years.

Instead, Gil represents the first mine to be developed under Kinross Alaska.

This new strategy, in combination with stacking lower grade ore from the Gilmore expansion on the new Barnes Creek heap leach facility, is expected to result in a major new era of strong Kinross Alaska gold production moving forward.

And this production profile is slated to hold steady and potentially even climb as the Kinross Alaska strategy begins to process even higher-grade ore delivered from projects beyond the Fort Knox property.

Up next: Manh Choh

As a mine that lies a mere nine miles east of the Fort Knox mill on lands held by Kinross, the 0.6 g/t gold ore at Gil likely lies at the lower end of the grade threshold for projects developed under the Kinross Alaska strategy. As a rule of thumb, the further the ore must be shipped, the higher the gold grades must be.

With the idea of processing high-grade ore from Manh Choh through the mill at Fort Knox, Kinross paid Contango ORE Inc. US$93.7 million to buy a 70% joint venture interest in Manh Choh. CORE, which discovered and expanded the Peak deposits at Manh Choh, owns the remaining 30% stake in the Peak Gold JV.

Based on the current resource, Kinross expects to produce 1 million oz of gold-equivalent, which includes the value of both the gold and silver recovered, from Manh Choh ore over a 4.5-year mine life slated to begin in 2024.

This means that ore from the Peak deposits will be contributing roughly 222,000 oz of gold per year to the Kinross Alaska mill. Meanwhile, higher grade ore mined from the Gilmore expansion at Fort Knox will also be fed into the mill and lower grade ore stacked on the newly constructed Barnes Creek heap leach pad.

To ready Manh Choh for delivering gold to the Kinross Alaska mill, the Peak Gold JV budgeted US$18 million for 2021 to fund in-fill drilling, engineering, and environmental studies needed to complete a feasibility level study for a Gil-like mine at the Peak Gold deposits; exploration to test other intriguing targets across the 675,000-acre Manh Choh property; as well as community relations activities in the Tetlin area.

Kinross says a scoping study completed earlier this year confirms the initial estimates that trucking ore from Manh Choh to Fort Knox for processing results in a low-cost, high-margin project.

"Many of the key metrics in the study remain comparable to our view at the time of the acquisition, including grades, recoveries, life-of-mine production of approximately 1 million ounces, with first production expected in 2024," Kinross Gold Chief Technical Officer Paul Tomory informed investors in July.

"There is an economic radius around Fort Knox given the mill capacity that makes a good chunk of Alaska attractive for potential bolt-on," Tomory said upon the announcement of Kinross' Alaska strategy.

This is good news for the Fairbanks area economy that has been bolstered by the taxes, high-paying jobs, and purchasing power of Fort Knox over the past 27 years, as well as communities that could see new jobs and other economic benefits from potential Kinross Alaska bolt-on mines in their area.

Currently, Fort Knox employs roughly 720 workers living in the Fairbanks area and about another 150 work for contractors on the mine site.

Alaska Aggregate Products, which has been contracted to do the mining at Gil, is expected to employ around another 80 workers.

According to McKinley Research Group (formerly McDowell Group), the average wage for workers at Alaska mines is $115,320, over twice the state average.

At this rate, the 950 direct Kinross employees and contractors at Fort Knox will bring home nearly $110 million in wages each year.

In addition, the Interior Alaska gold mine is expected to pay $14.7 million in state and local taxes, royalties, and fees this year, a number that is anticipated to increase with the start of mining at Gil.

"Gil is not only bringing jobs to the region but also increases taxes paid to the state and the borough," said Bran.

This increase comes at a time that without the Kinross Alaska strategy the mill at Fort Knox would be winding down and the jobs dwindling as this iconic gold mine entered into its final stages.

With the explosive groundbreaking at Gil, however, Fort Knox has gained a second life, and the economic benefits are expected to continue as the Kinross Alaska strategy develops new plays in the Fairbanks area and across the great state of Alaska.

Alaska Gov. Mike Dunleavy pushes the button for the first blast at Gil, the sixth large-scale metal mine in Alaska.