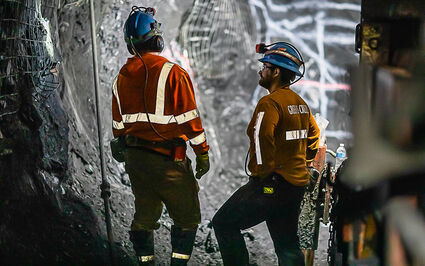 Silver production at Greens Creek dropped during the second quarter due to manpower challenges that caused the company to mine easier-to-access but lower-grade ore at the underground operation in Southeast Alaska.

Hecla Mining Company Oct. 12 reported that its Greens Creek Mine produced 1.8 million ounces of silver and 9,735 oz of gold during the third quarter of 2021, easing off the 10-million-oz-per-year pace set at the Southeast Alaska operation during the first half of 2021.

"Greens Creek had a good quarter but was down compared to an exceptional 2020 third quarter. The mine experienced lower grades due to the mine sequence, which was driven by manpower challenges that are being addressed through schedule changes and other means," said Hecla Mining President and CEO Phillips Baker, Jr.

Hecla's four mines – Greens Creek, Lucky Friday in Idaho, Casa Berardi in Quebec, and Nevada Operations – produced 2.7 million oz of silver and 42,206 oz of gold during the third quarter of this year.

With increased output from the Lucky Friday Mine in Idaho offsetting some of Greens Creek's deficits, Hecla's companywide silver production dropped roughly 24% from the 3.5 oz produced during the same period last year, while gold production increased by 3% due to a strong quarter at the company's Casa Berardi mine in Quebec.

Hecla reports that it ended the third quarter with more than $190 million in cash, up about $9 million from the second quarter, and nearly double the $97 million of cash and cash-equivalents at the end of the same period of 2020.

"Hecla is the United States' largest silver miner producing 40% of all the silver mined in the U.S. With this quarter's performance, we are not only the largest but also demonstrate the strength of our operations in this lower silver price environment with approximately $10 million added to our cash balance, despite the semi-annual interest payment made this quarter and some one-time cash transactions," Baker said. "Since the beginning of 2019, we've added over $160 million of cash to our balance sheet while returning approximately $30 million to common shareholders in the form of dividend payments, in addition to increasing our investment in operations and exploration."