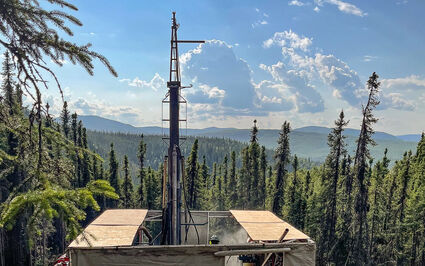 Freegold Ventures has completed more than 30,000 meters of drilling this year at its Golden Summit project in Alaska.

Freegold Ventures Ltd. Oct. 19 reported that the latest batch of results from this year's drilling at Golden Summit includes holes that cut broad zones of higher-than-resource-grade gold mineralization at and around the Dolphin deposit and narrow zones of high-grade gold at the adjacent Cleary zone.

During 2020, Freegold began tracing very high-grade gold mineralization from the historic Cleary Hill Mine – which produced 281,000 oz of gold from ore averaging 1.3 oz per ton before the operation was shuttered during World War II – westward toward the Dolphin deposit.

This year's ongoing 40,000-meter drill program is focused on determining the orientation and extent of the higher-grade mineralization between the Dolphin and Cleary zones and upgrading the current resource to further advance the project through prefeasibility.

So far this year, the company has completed more than 30,000 meters of drilling in 55 holes.

The latest batch of assay results are from seven holes – four drilled within the Dolphin intrusive that hosts the bulk tonnage resource and three testing high-grade vein targets south of the historic Cleary Mine.

The remainder of the current Dolphin results are from holes – GS2105, GS2106, and GS2110 – drilled within schist on the north side of the intrusive.

Highlights from these holes include:

Freegold says the broad higher-grade intercepts in holes GS2110 and GS2125 lie outside of the existing resource.

GS2110 is particularly interesting due to its location about mid-way between the Dolphin intrusive to the west and the Cleary Hill vein area to the east.

Freegold says its 2021 drill program will continue to focus on determining the orientation of the zones of higher-grade mineralization consistent with its revised interpretation, especially to the north, east, and west of the Dolphin intrusive. 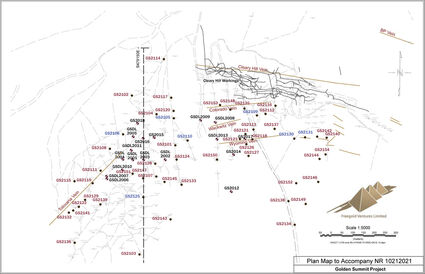 Drilling will also test the area south of the Cleary Hill mine workings where previous workings, including the Colorado, Wackwitz, and Wyoming vein zones, have never been tested to depth or along strike to the east.

In addition to drilling aimed at upgrading and expanding the resource to further advance Golden Summit through pre-feasibility, the 2021 program includes environmental baseline, metallurgical, and cultural resource studies.

Freegold is planning to test other targets on the project that may potentially host additional resources and other buried intrusives. Ground geophysics and soil sampling have been conducted on these exploration targets and further drilling is being planned.

The turnaround time for assays from the expansive drill program at Golden Summit remains slow, largely as a result of the backlogs at assay prep facilities in Fairbanks.