Kinross Alaska shows its own heart of gold, reclaiming lands and setting an example for all mining companies to follow North of 60 Mining News – December 3, 2021 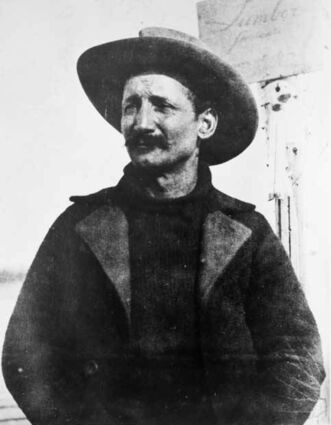 Accredited with the initial discovery that cemented Fairbanks as a permanent settlement, today, Alaskans in the region celebrate Golden Days week to honor Felix Pedro.

Spread across the Tanana Valley foothills, accessible by road, rail, and air, Fairbanks is called Alaska's Golden Heart City for a reason. Laying claim to a colorful history, the city at the center of the Last Frontier has its roots dug deep from the many mining discoveries throughout the century within the simply named Fairbanks Mining District.

Although early exploration had Russian traders in and around the Tanana region, it would not be until 1885 when Henry Tureman Allen, an eventual Major General known for his exploration of early Alaska, would be sent to explore the vast unexplored interior that records detailing the Fairbanks quadrangle would start.

However, many more years would pass before the mineral resources of the district would attract any attention.

Mentioning the settling of the region cannot first happen without pointing out the rippling effect the Klondike Gold Rush started for the northernmost areas of North America.

As available sources of placer gold dwindled in the famed goldfields of the Yukon, like locusts in a stricken field, stampeders spread out searching for more. Following the slightest rumor, hoping for a slice of the pie that hearsay had made men rich beyond their wildest dreams, only to learn the available gold was greatly exaggerated and left most penniless at best.

When the gold rush in Nome, far to the west, occurred, a great swath traveled the hundreds of miles to comb the so-called gold-lined beaches, which quickly became a poor man's paradise. Yet once more, those not quick enough left empty-handed, chasing the next discovery.

To fuel the ambient lifestyle of most of these hopefuls, waystations and trading posts sprung up along major trails, sometimes clever businessmen would set up shop before any discovery, in their own hope to fund the miners' expeditions and strike it rich in that regard.

One such trading post, established on the south bank of the Chena River on August 26, 1901, was just fortunate enough to become the very reason for Fairbanks today.

Founded by E.T. Barnette, the discovery of gold near his trading post caused him to turn what had been just a temporary stop into a permanent one. The gold caused yet another stampede of prospectors to the area, and buildings sprang up around Barnette's trading post.

In November of 1903, just five short years after the initial shockwaves from the Klondike, the residents would vote to incorporate the city of Fairbanks with Barnette becoming its first mayor.

Oddly enough, his story is not so unique to the times, with nearly half a dozen separate individuals that – either by luck, providence, foresight, or simply a hunch – were at the right place at the right time. So many northern cities, towns, and villages that exist today, over 100 years later, were due to these often-spontaneous stops.

And while preliminary exploration had been conducted by H. T. Allen nearly three decades prior, subsequent studies by the USGS would lay the groundwork for the richest gold district in Alaska today.

There's gold in them there hills

As Barnette, along with Captain Charles Adams, ran aground in a 150-foot steamer called the Lavelle Young, roughly eight miles up the Chena River, which they mistakenly believed to be a distributary that would allow them to detour upstream to their intended destination at Tanacross. This seemingly benign error caused Barnette, along with his wife and five hired hands, to unload 130 tons of supplies and build a trading post named Chena City.

Leaving behind Barnette, Adams returned downstream, while Barnette would have his first customers only hours later.

Tom Gilmore and Felix Pedro (birth name Felice Pedroni), pausing their search of Lost Creek, watched the plumes of smoke from the departing steamboat. Then, perched on a nearby slope, they stumbled into the newly erected camp, bought supplies, and headed northward into the hills.

Pedro would later discover gold in the Tanana Hills northeast of Fairbank on July 22, 1902, in a small unnamed stream – now known as Pedro Creek – prompting him to exclaim the timeless phrase, "There's gold in them there hills," triggering a full-scale rush and setting into motion the events that would establish Fairbanks for good.

With a rush in full swing, prospectors flocked through the Tanana River region, with the newly minted town of Fairbanks becoming the commercial center of the area.

At the time, it was estimated that several thousand people had settled there permanently, with Chena, the second largest town holding a population of several hundred.

In a 1913 United States Geological Survey report, Fairbanks was described as "an attractive town, built on the flood plain of Tanana River and provided with all the essentials and many of the luxuries of modern life. It has two banks, several hotels and newspapers, an electric-light plant, a telephone system that connects with placer camps in the vicinity. The military telegraph lines keep it in touch with the outside world."

As the summer of 1903 brought disappointing results for the newest rush, a discovery by Dennis O'Shea changed everything, striking it rich on Fairbanks Creek, No. 8 above. This would become one of the richest claims in the future-named Fairbanks Mining District, paying as high as $136 to the pan (at $20/oz gold).

Soon after, discoveries on Cleary and Ester Creeks followed, and almost two-thirds of the gold mined in the Tanana hills before 1910 came from these three creeks. Estimated gold production was more than $30 million (roughly $874 million today).

The report from the USGS detailed the estimated gold production between the years 1903 to 1912; according to it, a total of 2.78 million fine ounces of gold were found, valued at $57.46 million.

By the time of World War I, the easy-to-reach gold was seemingly exhausted, and Fairbanks' population plunged as miners moved to newer promising finds at Ruby and Iditarod. However, the construction of the Alaska Railroad caused a surge of economic activity and allowed heavy equipment to be brought in for further exploitation of gold deposits.

While enormous gold dredges were built north of the city, with the increased price of gold during the Great Depression, another boom came during the 1940s and 1950s as the settlement became a staging area for the construction of military depots during World War II and the first decade of the Cold War.

Yet, quietly hidden, a discovery by H.A. Currier on the banks of Melba Creek would dissolve after a small operation that, according to reports, bore no fruit.

Kinross Alaska, at its heart

First assumptions toward the name of the Fort Knox gold mine leads one to believe it was named after the famous gold depository in Kentucky, although it is interesting to note that the depository is not actually called Fort Knox and that that is just the name of the Army Installation adjacent to it. It is simply named the United States Bullion Depository located next to Fort Knox.

Cursory probing revealed no apparent correlation or explicit naming of the gold mine. But, when you considered the nearly 9 million oz of gold recovered over the past 25 years from this mine a few miles north of Fairbanks, the moniker is fitting.

Regardless, Taylor and Johnson worked the placers of Monte Cristo Creek from 1980 to 1982, recovering bismuthinite nuggets containing abundant gold. Then in 1984, a consulting geologist by the name of Rob Blakestead noted the presence of visible gold in quartz veins hosted by granite in the now Fort Knox area.

This discovery led to increasing levels of exploration to locate the source of the gold, and then in 1986, the claims were leased to Nye Minerals. Between 1987 and 1991, numerous small mining companies would actively explore the claims until finally, in 1992, Amax Gold would acquire ownership of the Fort Knox property.

Construction of the mine began in 1995, with the first gold pour happening at the end of 1996. Today's owner and operator of the Fort Knox Mine, Kinross Gold, would acquire Amax in 1998 and go on to grow into the largest producer of gold in the Great Northern state.

Located roughly 25 miles northeast of Fairbanks, the Fort Knox mine is at the heart of a new Kinross Alaska strategy that includes processing ore from satellite deposits such Gil and Manh Choh, further strengthening this already impressive gold miner.

For 25 years, Kinross has been providing for Alaska and its residents, supplying upwards of $127 million in taxes for the Fairbanks North Star Borough, making it the largest single taxpayer in the region, and nearly $50 million in tax revenue for the state.

Furthermore, as of 2021, the Fairbanks miner employs more than 700 men and women, many of whom are direct descendants of the stampeders who sought gold over a century ago.

As a company that focuses on creating a strong sense of unity amongst its employees, it is not unusual to find multiple generations working there today.

Not just a miner, Kinross has taken upon itself to return what it has taken by restoring or working with others to restore natural fish habitats and old creeks that had been historically mined and practically ruined in those Wild West days.

One of the most impactful projects that Kinross has undertaken was the rehabilitation of Fish Creek, a 27-year project to reclaim this stream that had been historically mined out and impaired over 100 years ago.

Working with Alaska Fish & Game, the company sought to reclaim the valley, regrade, revegetate and stop sedimentation to allow Arctic Grayling populations to recover. Receiving nominations from the Resource Development Council and the State of Alaska, Kinross received the Tilestone award in 2009 for its efforts.

Furthering this reclamation endeavor, Kinross played a significant role in helping restore Resurrection Creek, yet another water source that had been damaged from historical mining. Working alongside Trout Unlimited and many others, the companies seek to restore the fish habitat one section at a time.

With a company that is expected to continue operations until at least 2030, which also recently celebrated its 8 millionth ounce poured in 2019, and the development of Gilmore – perhaps a nod to Pedro's partner – there have been innumerable successes and treasured moments throughout its time.

More than just a mining company, it has ingrained itself into the lifestyle of Interior Alaska, becoming a culture of responsible miners and a business worth looking up to. 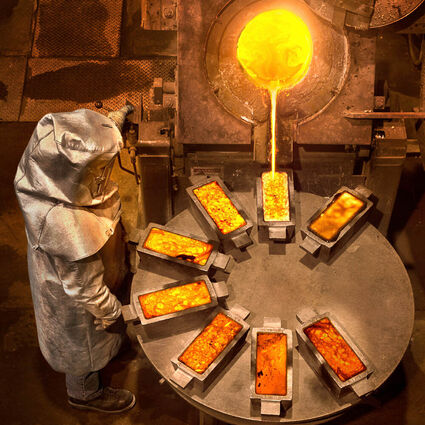 Over the past 25 years Kinross has poured nearly 9 million ounces of gold at its Fort Knox Mine in Interior Alaska.