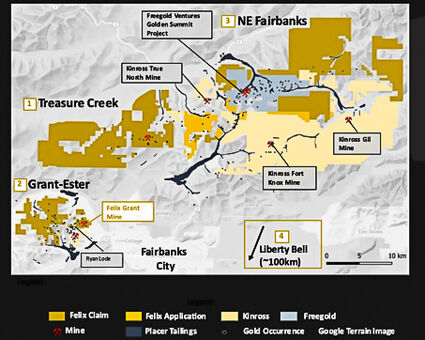 In partnership with Millrock, Felix Gold has amassed an enormous land position in three blocks of gold exploration claims in the Fairbanks Mining District of Interior Alaska.

If successful, Felix Gold plans to raise between A$10 million and A$13 million (US$7.1 million and US$9.3 million) in an initial public offering, and its shares would begin trading on the ASX in January.

This financing would provide Felix with the cash to increase exploration on a significant land package it has accumulated in partnership with Millrock.

In January, Felix entered into a strategic alliance with Millrock on several Interior Alaska projects – Treasure Creek and Ester Dome near the Interior Alaska city of Fairbanks, plus the Liberty Bell project about 70 miles to the southwest.

In exchange for becoming a roughly 10% shareholder of Felix when it went public, Millrock assigned the Australia-based company all its rights to the Ester Dome and Treasure Creek properties.

Since signing the initial agreements, the Felix Gold team, working in collaboration with Millrock, expanded the claim package, targeting areas that appeared to have high potential based on a systematic evaluation of public data and Millrock's proprietary database.

"Depending on the amount of money raised in the IPO, Millrock will receive Felix Gold shares with an initial value ranging between approximately US$1.7 million and US$1.9 million," explained Millrock Resources President and CEO Greg Beischer. "Additionally, Millrock will be entitled to production royalties on all of the claims comprising the current extensive property position and on future claims that may be acquired within a large Area of Interest surrounding the Fairbanks Mining District."

It is anticipated that the ASX will impose a mandatory restriction that will not allow Millrock to sell its Felix Gold shares for up to two years.

The Alaska-based company, however, is expected to receive an initial advanced minimum payment of US$50,000 per year beginning in January.

If Felix successfully completes the IPO, the Australian company will be positioned to carry out robust exploration on its Alaska properties during 2022.

More than 3,000 soil samples collected using power augers that bore through permafrost cover to sample the overburden-bedrock interface were collected this year.

Millrock says this work has served to identify strongly anomalous gold mineralization at the NW Array, Scrafford, and Eastgate prospects at Treasure Creek. The survey also identified strong anomalies at the Northeast Fairbanks portion of the project, which is proximal to Kinross Gold Corp.'s Fort Knox Mine and Freegold Venture Ltd.'s Golden Summit project.

Located about five miles south of Treasure Creek, the Ester Dome property is home to the past-producing Grant gold mine.

The JORC-compliant report has also identified an exploration target at Grant Mine with the potential for approximately another 500,000 oz of gold in around 6 million metric tons of resource averaging around 2 g/t gold.

"With a strong treasury and a robust 2022 budget, Felix Gold will have a great chance to make new gold discoveries and expand the gold resource at the Grant Mine," said Beischer. "Any exploration success should result in strong appreciation of the Felix Gold shares that Millrock will hold, and also should support Millrock's share price."