Miners must thread the eye of a needle 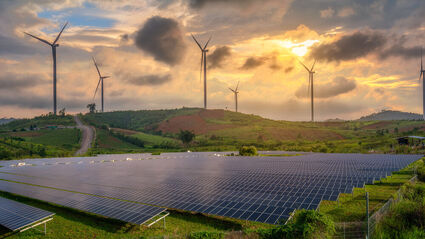 No matter what form of low-carbon energy generation is pursued, the associated infrastructure will require millions of tons of minerals that are abundant in Alaska.

If global warming and the associated risk of climate change is due, at least in part, to anthropomorphic causes, it stands to reason that there are too many anthropoids (specifically, humanoids) hanging around. We have always known, I think, that overpopulation is a grave problem to life on earth, primarily because humans, like cockroaches, are omnivorous, ubiquitous, and prolific.

It has been said that you could accommodate the entire population of earth in the Grand Canyon.

"If you took all the world's population and dumped them into the Grand Canyon they wouldn't fill a fraction of it," according to the Daily Mail. (https://www.dailymail.co.uk/sciencetech/article-2617559/Fascinating-image-depicts-look-like-7-2-billion-population-dumped-Grand-Canyon.html)

I have always wondered why our Fourth Estate has not made this point when discussing climate issues. Perhaps Elon Musk and Richard Branson have more influence than I thought.

Getting down to cases, the hamster-wheel debate about reducing carbon dioxide (which sometimes is generated by Environmentalists exhaling) and methane (which is sometimes produced by bovine flatulence) could really profit from someone, somewhere, connecting the dots. If we are not going to seriously cap population and insist on having a carbon dioxide-free world, it seems obvious that we need to either limit our global demand for power or find hydrocarbon-free alternatives.

We cannot, in the current political environment, turn to nuclear energy because of the theoretical risks associated with accidents (nod to Chernobyl) and radioactive waste. Hydropower, on the other hand, is inimical to fish habitat. Wind turbines require all kinds of mined materials, most notably 3-5 tons of copper each. Solar panels have a finite life, about 25 to 30 years, and will have to be recycled in due course at significant cost. Tidal generation and other exotic forms of energy capture also seem to have dispositive limitations.

One thing is clear, however. No matter what form of energy generation is pursued, the associated infrastructure will require millions of tons of minerals, some common, some scarce, but all must be mined. And this is where connecting the dots becomes important.

For reasons that defy scrutiny, the barriers to bringing new mines into production in the United States are consistently interposed and, if briefly overcome, re-interposed.

There can be no more blatant an example than the case of the Tongass National Forest. Theoretically, and conceptually, National Forests in general and the Tongass in particular ought to be used, not just for its wilderness values, such as on Admiralty Island and Misty Fjords, and its wildlife, including bears and deer and spotted owls, but also for its timber and, of course, its extensive mineralization.

I cannot fathom, even after decades of reflection, why mining in Alaska offends so many otherwise sensible and intelligent people who use computers and drive cars, not to mention ride in aircraft and boats, but who cannot make the connection between a safe, highly-regulated, environmentally-friendly mine and the ballpoint pen in their purse or pocket.

The literature is replete with the association between strategic minerals and consumer goods. There is no mystery here. Mines that fail, almost invariably, do so not from lack of demand or inadequate engineering but from the cost burden of regulation.

I think what threatens the greatest despair is the metaphor between the COVID-19 induced breakdown in our seaport distribution system and the implicit threat to our mining industry. While we watch shiploads of containers stack up at our ports because the trucks and warehouses needed to accommodate those imported products are simply unavailable, it makes me wonder how we will be able to deal with unavailability of critical minerals if the nation's mines are regulated out of existence.

Again, the Tongass case is an illustration of how competing interests make a legitimate dispute into a political football. The Tongass is big enough and robust enough to easily accommodate all comers.

As with the case of hydrocarbons, the need and the demand for mined minerals is not going to simply disappear. The notion that solar or wind power will displace coal or oil assumes that power demand will remain constant while alternative generation continues to increase. That is a false assumption. It is a given that power demands will increase as more and more people want power-grabbing electronic gadgets.

Likewise, the demand for metals and minerals is guaranteed to increase over time as the population grows. As we are not going to connect the dots between population and demand when it comes to climate change, it appears that we simply cannot connect the dots between the need for lead, zinc, copper, and iron in the ground and the bicycles, air conditioners and trains we build our lives around.