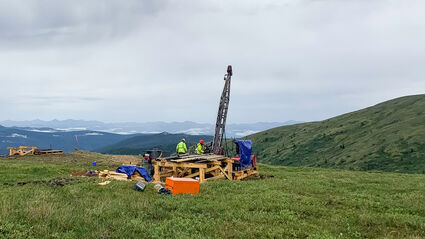 Crews complete the second of a 30-hole drill program carried out during 2021 at Tectonic's Tibbs gold project in Alaska.

Tectonic Metals Inc. heads into the new year eagerly awaiting the results from roughly 85% of the 5,018 meters of drilling completed at its Tibbs gold project in Alaska's Goodpaster Mining District during 2021.

This drill program included 2,699 meters of reverse circulation drilling in 18 holes and 2,319 meters of oriented core diamond drilling, a first for this project about 22 miles (35 kilometers) southeast of Northern Star Resources Ltd.'s Pogo gold mine.

Tectonic Metals Vice President of Exploration Eric Buitenhuis said the oriented diamond drilling is one of a series of "firsts" for the Tibbs project that culminated in testing for Pogo-style horizontal gold mineralization in the previously undrilled western gneissic frontier of the project.

"We not only drilled the first ever oriented diamond core at Tibbs but also completed comprehensive mapping and prospecting programs at our Tibbs South, Mt. Harper, and Maple Leaf properties," he said. "Another 'first' was our TITAN-160 survey, the first high-powered ground-based geophysical survey completed over the western rocks at Tibbs, which provided unprecedented insight into the nature of the controlling structures there."

Tectonic's 2021 drill program at Tibbs was carried out in two phases.

The phase-one program involved 803 meters of drilling in seven holes, three at Michigan and four at Gray Lead.

Michigan is a broad, northeast-trending structural corridor first drilled by Tectonic with a 2019 hole that cut 29 meters averaging 6.03 grams per metric ton gold.

Tectonic says the Michigan zone, which has been traced for 275 meters along strike and to a depth of 250 meters, is open in all directions.

While drills were carrying out phase-one drilling, crews were refining targets for phase two.

"The phase-one exploration program was a success with drilling demonstrating high-grade gold at two Tibbs' gold zones while prospecting, rock sampling and an accompanying geophysical survey fortified the merit of drill testing our gold-in-soil anomalies now," said Tectonic Metals President and CEO Tony Reda. "Having raised additional funds to allow us to be opportunistic, Tectonic quickly launched a Phase II exploration program and delivered a comprehensive drill test focused on making new discoveries in the gneissic terrain of our property."

This work included geophysical survey lines that extend from the intrusive rocks that host known high-grade gold zones at Tibbs into the gneiss rocks to the west, where 2020 mapping identified low-angle faults within moderately dipping gneissic rocks, key characteristics of the Pogo geological model.

Soil sampling over these gneissic rocks outlined multiple gold-in-soil anomalies with Pogo-like geochemistry, and one rock collected from the Lower Trench prospect during 2021 contained 190.4 g/t ton gold, the first evidence of Pogo-style vein mineralization in the gneissic terrain at Tibbs.

Assays are pending from 952 meters of drilling completed in five discovery holes drilled at Lower Trench this year.

Tectonic's exploration drilling in the gneiss rocks in the western part of Tibbs also includes four holes at Gray Lead West, which lies immediately west of one of the only known high-angle structures carrying high-grade Pogo-style gold mineralization outside of the Pogo mineral claims, and two holes at Johnson Saddle, a strong gold-in-soil anomaly coinciding with low-angle structures observed in TITAN geophysics.

Assays are pending for all six holes.

In addition to Pogo-like targets, Tectonic geologists discovered gold mineralization reminiscent of Kinross Gold Corp.'s Fort Knox Mine in rock samples collected from the Jorts and Jeans Ridge prospects at Tibbs South, a property immediately south of Tibbs being leased from Doyon Ltd.

"Tectonic's 2021 exploration program at Tibbs was predicated on our desire to find the next mineable gold deposit in the Goodpaster Mining District," said Reda. "Our ambition is reflected in the capital we raised this year and the diligent, aggressive approach we have taken with this year's exploration program at Tibbs resulting in the deployment of two drills to site and the most targets being drill tested in one season at Tibbs."

While crews were exploring Tibbs and associated gold properties in the Goodpaster District, Tectonic entered into an agreement with Doyon for the Flat gold project in Southwest Alaska.

Located in the Kuskokwim Mineral Belt about 25 miles (40 kilometers) north of the 39-million-ounce Donlin Gold project, the Flat property has intrusive-hosted, sheeted quartz vein gold mineralization above two creeks – Flat and Otter – that are estimated to have produced more than 830,000 oz of placer gold since 1908. When you add in other streams draining Chicken Mountain on the property, this total is more than 1.3 million oz of alluvial gold.

Approximately 11,000 meters of historical drilling has been completed at Flat, with all mineralized zones remaining open. In addition, this roughly 92,000-acre property hosts many compelling gold targets that have yet to be drilled.

"The acquisition of Flat provides Tectonic with access to one of the most exciting gold exploration opportunities in Alaska," Reda said earlier this year. 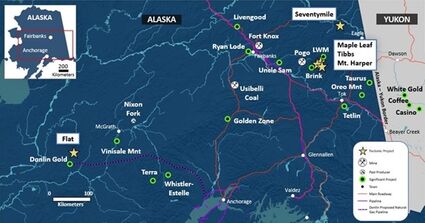 For now, Tectonic eagerly awaits the assay results from most of the 2021 drilling to test Pogo-like targets on its Tibbs property in the Goodpaster Mining District.