The path to mining in Alaska goes through its First People Alaska Native Claims – October 12, 2021 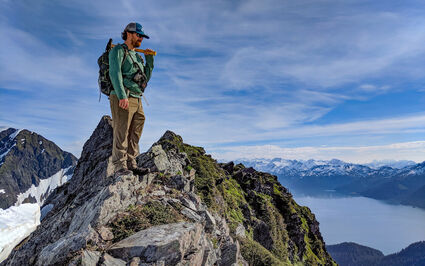 Matt Ellis, resource specialist for Chugach Alaska's land and resources department and a shareholder descendant of the corporation, investigates a mineral prospect on Chugach land.

Alaska boasts what many consider the most successful aboriginal land claims settlement on Earth – a solution that has not only turned out to be a cultural success but a brilliant business move for the more than 140,000 Alaska Natives and an economic boon for the state that covers the resource-rich lands these industrious and innovative peoples have called home for millennia.

Signed into law by U.S. President Richard Nixon on Dec. 18, 1971, the Alaska Native Claims Settlement Act, commonly referred to as ANCSA, involved a unique plan to organize Alaska Natives into 12 regional corporations, with each having its own geographical regions based largely on heritage and shared interests.

Eligible Alaska Natives had the opportunity to be issued shares in both a regional and village corporation at the time ANCSA was formed, shares that cannot be sold.

"In this way, ANCSA established a framework for ANCs (Alaska Native corporations) to provide for the economic, education, social and cultural well-being of current and future generations of shareholders," Sophie Minich, president and CEO of Cook Inlet Region Inc., the Alaska Native regional corporation more commonly known as CIRI, penned in a letter on the 50th anniversary of ANCSA.

For mining companies looking to explore and develop the rich mineral resources Alaska has to offer, understanding the ANCSA landscape early could be the difference between efficiently permitting and developing a successful mine with strong Alaska Native partners, or arduous work later to gain the social license and government permits needed for mining in one of the 12 ANCSA regions, a 424.5-million-acre northern expanse collectively known as Alaska.

For these reasons, an ANCSA map and information on the Alaska Native lands, people, corporations, and businesses has a place among the geological maps and mineral data for any prospector, explorer or miner looking to unlock Alaska's vast mineral potential.

While placing aboriginal peoples who put more value into a successful whale hunt in Utqiaġvik (the Far North community formerly known as Barrow) than being a wolf on Wall Street in a western corporate boardroom may not seem like a good fit, a look back at the past 50 years proves otherwise.

ANCSA regional and village corporations, and their business subsidiaries, make up 18 of the top 20 Alaska-owned businesses listed on the 2020 Top 49ers, an annual list published each year by the Alaska Business magazine that ranks Alaska-owned companies by gross revenue.

"The significance of ANCSA cannot be overstated," Minich wrote. "In the nearly 50 years since their creation by Congress, ANCs have grown to become an integral part of the Alaska economy, and given the current fiscal crisis brought about by the COVID-19 pandemic, their ongoing success and growth is critical."

This rise to the top business titans in the 49th State, however, was not without its travails.

"The transition to a corporate model was not easy. There were many challenges along the way, as people who had limited experience conducting Western business were thrust into new roles," Anthony Drabek, a director of Koniag Inc., the regional corporation for the Kodiak Archipelago, penned in a column published earlier this year in the Anchorage Daily News.

This sudden shift from riverbank to boardroom, however, resulted in corporations built on environmental, social, and governance standards nearly five decades before ESG became a buzzword in the business world.

With a focus on persevering subsistence resources, safeguarding culture, and ensuring the prosperity of their Alaska Native shareholders – while at the same time being financially successful enough to carry out those priorities – the ideas of environmental stewardship, protecting and enhancing traditional values and culture, and honesty and integrity in business are enshrined in the core values and mission statements of ANCSA corporations.

"(W)hen you look at the results today, one could say that the Alaska Native corporations, or ANCs, created by ANCSA were some of the first socially conscious businesses. Who better to steward lands for the future than those who have subsisted off them for centuries?" Drabek penned. "Today, ANCs use our lands, as our ancestors did, but also to sustain our people in a Western economy, delivering billions of dollars in economic impact and thousands of jobs to Alaska."

The Alaska Native-owned business titans have achieved much of their corporate success off the oil and gas, minerals, and timber found on the roughly 44 million acres of lands they will own once all lands guaranteed under ANCSA are conveyed, an area about the size of Oklahoma.

When it came to selecting these lands, the criteria and priorities differed for ANCSA village and regional corporations.

For the most part, village corporations received title to surface rights and were instructed to select lands at and around their village. Regional corporations, however, were primarily given title to subsurface estate on lands they selected across the wider region.

Similar policies of selecting lands of cultural, subsistence, and natural resource significance were employed by all the ANCSA corporations as they began the process of choosing 44 million acres from the lands available following the passage of ANCSA.

It was often the case that village corporation land selections covered areas of cultural and subsistence significance, as well as for infrastructure, while regional corporations selected locations with the most potential for minerals and other natural resources.

On lands particularly rich in mineral resources, however, village and regional corporations often claimed both surface and subsurface ownership.

As a result of this land selection process, ANCSA corporations were able to gain ownership of highly prospective mineral lands across the state.

Red Dog, which accounts for roughly 5% of the global zinc mine production, for example, is located on lands owned by NANA Regional Corp., the ANCSA regional corporation for Northwest Arctic.

As a result of a net proceeds royalty from the production at Red Dog, which is now at 35% and climbs by 5% every five years up to 50%, NANA brings in significant revenue from this globally significant zinc mine, 70% of which is shared with the other 11 regional corporations and village corporations within them through Section 7(i) and 7(j) provisions of ANCSA.

The 45-million-ounce Donlin Gold project is another prime example of the rich mineral lodes found on lands selected by ANCSA corporations.

Calista Corp., the ANCSA regional corporation for the Yukon-Kuskokwim region of Southwest Alaska, owns the mineral rights of this world-class gold deposit, and The Kuskokwim Corp., a village corporation within the Calista region, owns the surface estate covering Donlin.

These world-class deposits are just two of many other ANCSA corporation projects with massive mineral potential.

It is no accident that 12 ANCSA regional corporations and the village corporations within them ended up with some of the richest Alaska real estate known at the time.

Nelson Angapak Sr., who worked in the Calista Lands and Natural Resources department during the ANCSA regional corporation's early years, said these selections focused on lands of cultural significance and future economic potential.

"The policy of the lands department was that the village corporations must be advised to select the land with the most resource potential in terms of subsistence resources, mineral potential, and oil and gas potential, or any combination of the three," he explained.

Getting to know the people

While ANCSA regional and village corporations hold title to just over 10% of Alaska, their regions cover 100% of the Last Frontier.

This means that whether a mining company is looking to explore and develop mineral properties on Alaska Native, state, or federal lands, understanding the landscape of the ANCSA regional and village corporations is a key first step in the future success of the project.

This means getting to know Alaska's First People.

While the roughly 140,000 Alaska Natives often work together on land, cultural, and economic issues common to them all, their cultures are as diverse as Alaska is expansive.

There are 11 distinct Alaska Native cultures – Athabascan, Cupik, Eyak, Haida, Inupiaq, Saint Lawrence Island Yupik, Sugpiaq, Tlingit, Tsimshian, Unangax, and Yupik. And within these prominent cultures are groups with their own cultural activities, traditions, and dialects – more than 20 different languages are spoken by Alaska Natives.

While values such as a deep respect for the land, tradition, and subsistence are common to all Alaska Natives, each of the 12 regions, 11 cultures, 229 federally recognized tribes, and 140,000 people are unique.

For mining and mineral exploration companies doing business in Alaska, sitting down with ANCSA regional, village, and business leaders near their projects is an excellent first step to understanding the people and getting to know the area. Moreover, getting to know the people who live closest to where a company is planning to work is a vital step that offers enormous advantages.

When it comes to getting to know the people around a promising mineral exploration project there are two things to know – engage early and engage often.

Even before a company has advanced a mineral prospect to a point where it is time to organize formal community meetings, talking with the people at the local store, café, or post office can go a long way toward building trust early on.

Basically, if a community member sees helicopters flying around while out fishing or running trapline and does not know what is going on, the locals will feel that their area is being encroached upon, and the people living in the area will speculate on the motives.

While letting a handful of community members know what you are doing on a quick stopover to a promising property may not garner immediate trust, it is better that the local people hear directly from the company than through the "Tundra Telegraph," a term for information passed from individual-to-individual in rural Alaska.

And, with modern social media, information can be telegraphed across a community and throughout a region very quickly.

Engaging early and often will let the community know what is going on, helping to avoid speculation and mistrust that could make earning a social license to operate much more challenging later on.

In addition to earning that ever-important social license, doing business with and getting to know the local people has much to offer Alaska's mining sector.

One of the primary rewards is recruiting a local workforce.

Many of the ANCSA shareholders living in rural Alaska have worked in remote camps, are accustomed to the climate and terrain, and have experience with the positions needed at mineral exploration projects. When you couple this work experience with lifelong and generational knowledge of living and working in the region, hiring local provides many advantages for mining companies. 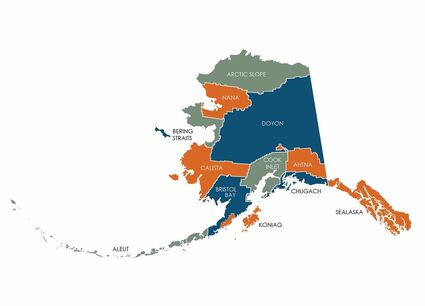 ANCSA involved a unique plan that created 12 Alaska Native regional corporations, with each having its own geographical regions based largely on heritage and shared interests.

Mining companies can also learn a lot about the area by sitting down and talking with local residents. Getting to know the "traditional knowledge" can pay dividends down the road.

This traditional knowledge could be finding out about a trapline that is in the same area as a potential deposit and being able to talk with the individual early in the process; getting generational insight into weather and wildlife that can assist environmental baseline studies; or even information on outcrops or other geological structures that could lead to new discoveries.

The biggest dividend, however, could be building solid relationships on a foundation of mutual trust and respect.

A foundation that is vital to the success of any mining company planning to do business in any of the 12 ANCSA regions – a fantastically mineral-rich expanse collectively known as Alaska.