JV is set to launch Arctic permitting for drilling this summer North of 60 Mining News - January 11, 2021 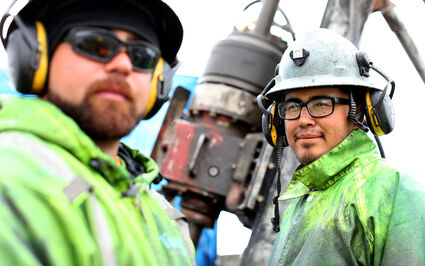 A field program scheduled to get underway in June will include up to 10,000 meters of drilling at Arctic and exploration targets across Ambler Metals' wider UKMP property.

2022 is shaping up to be a pivotal year for unlocking the world-class potential of the Ambler Mining District in Northwest Alaska.

Toward realizing this potential, Ambler Metals LLC, a joint venture equally owned by Trilogy Metals Inc. and a subsidiary of South32 Ltd., has budgeted US$28.5 million for 2022. This program is slated to include drilling, engineering studies, and the initiation of permitting for Arctic, the first mine to be developed on its Upper Kobuk Mineral Projects, a 427,690-acre package of state, patented and NANA-owned Alaska Native lands that blanket a large portion of the Ambler District.

A feasibility study finalized in 2020 details a financially robust mining operation at Arctic that would produce 1.9 billion pounds of copper, 2.3 billion lb of zinc, 388 million lb of lead, 386,000 ounces of gold, and 40.6 million oz of silver over an initial 12-year mine life.

While high-grade volcanogenic massive sulfide deposits such as the one hosting the rich ore at Arctic are typically mined from underground, the feasibility study details a lower cost open-pit mine feeding a 10,000-metric-ton-per day mill.

The Arctic mine project going into permitting is based on the operation detailed in this study.

Following an independent review of the permitting package for Arctic, Ambler Metals expects to file the permitting application, which will start the formal permitting process for the Arctic Project, with the United States Army Corps of Engineers early this year.

Given the key federal permit needed for developing a mine at Arctic falls under the jurisdiction of Army Corps, this agency will serve as the lead for the permitting process to be carried out in accordance with the National Environmental Policy Act.

Trilogy expects the permitting process to take a little over two years to complete, putting the Arctic Mine project on track to be permitted sometime in 2024.

"We are pleased that we are continuing to make progress on de-risking the Arctic project and that we are now very close to commencing the formal permitting activities," said Trilogy Metals President and CEO Tony Giardini.

As Ambler advances Arctic permitting, crews in the field will continue to explore the wider potential at UKMP.

After reviewing the technical data available from the 2021 program, Ambler Metals approved a 2022 field program that is expected to include up to 10,000 meters of helicopter-supported diamond drilling.

This program is expected to include resource development drilling at Arctic, scout drilling of both volcanogenic massive sulfide targets at Arctic and across the wider Ambler Belt, and carbonate-hosted copper targets around Bornite and the Cosmos Hills.

Located about 16 miles (26 kilometers) southwest of Arctic, Bornite hosts 6.4 billion lb of copper and 77 million lb of cobalt in near-surface and underground deposits.

Outside of Bornite itself, the Cosmos Hills have not been systematically explored since historical work was carried out by Kennecott in the 1990s. However, several copper-cobalt targets similar to Bornite, including Aurora and Pardner Hill, about three miles to the west, have been identified. 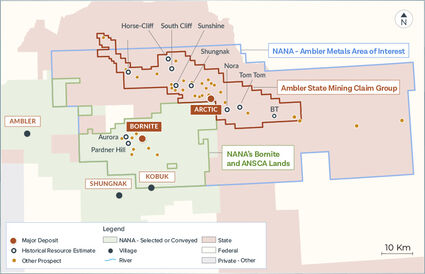 In addition to drilling, geological crews will seek out and evaluate new targets for drilling. This effort is expected to include the use of ground and down-hole electromagnetic surveys.

"Senior management at Trilogy Metals is working very closely with representatives from South32 and Ambler Metals in devising a 2022 program that will greatly assist in moving the Arctic project forward and to continue to add value through the drill bit," said Giardini. "We believe that 2022 will be another significant year for the company."