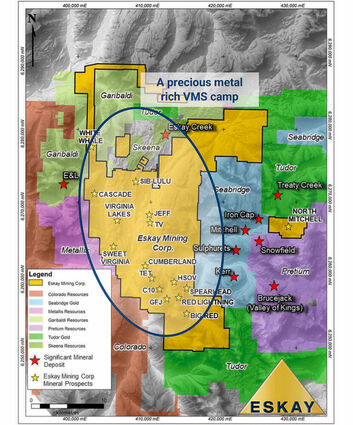 Covering a trend of volcanogenic massive sulfide gold mineralization between Seabridge Gold Corp.'s KSM project to the east and Garibaldi Resources Corp.'s Nickel Mountain project to the west, Eskay Mining Corp.'s namesake project lies at the heart of some of the richest real estate in British Columbia's Golden Triangle.

And a roughly 23,500-meter drill program carried out by Eskay during 2021 indicates that this 52,000-hectare (128,500 acres) property is as well mineralized as its address suggests it could be.

Much of this program focused on expanding Eskay Creek-like VMS mineralization at TV and Jeff, which were first drilled by the company in 2020.

Located about 2,000 meters apart, TV and Jeff were previously considered as separate systems, but geophysical data indicates that they may be connected and part of a larger system.

The 2021 drill program has added credence to this theory.

One of the final holes drilled before a mid-September snowstorm brought an earlier than planned end to Eskay's 2021 program, cut an impressive 86 meters of replacement-style sulfide mineralization about 300 meters north of TV, and 1,700 meters south of Jeff.

Eskay says the mineralization in this hole corresponds closely to one of several discrete geophysical anomalies occurring between TV and Jeff, adding to the mounting evidence that these deposits are part of a larger mineralized system.

Late season drilling also discovered exhalative massive sulfide mineralization at the top of what is now recognized as an extensive feeder system at TV.

The company says several holes cut sulfide minerals such as pyrite and sphalerite in this horizon. Much like the hole between TV and Jeff, this newly discovered horizon corresponds closely to a discrete conductive electromagnetic geophysical anomaly. Eskay says multiple drill holes encountered long intercepts of intense stockwork feeder mineralization below this massive sulfide body.

Late season drilling at C10, a target about eight kilometers (five miles) south of TV, encountered the same rocks that host the gold-silver deposits at Skeena Resources Ltd.'s Eskay Creek gold-silver mine project about 20 kilometers (12.5 miles) to the north.

In addition to the drilling, groundwork at Scarlet Ridge (previously known as New York) confirms that this area several kilometers northeast of Jeff hosts extensive rhyolite-hosted VMS mineralization over a strike length of at least 1,500 meters.

Like all projects in Alaska and northern Canada, the turnaround time for Eskay Mining drill results from assay labs is slow due to an extremely active exploration season; restrictions and protocols related to COVID; and a chronic shortage of labor, especially at sample preparation facilities.

As of Aug. 31, 2021, Eskay Mining held 23.7 million shares of Garibaldi Resources, or a roughly 19.5% stake in the company exploring the Nickel Mountain project on the northeast side of the Eskay property.