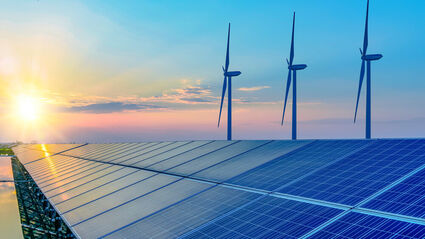 Wind, solar, and the batteries needed to store this renewable power is creating new demands on industrial minerals and metals that are abundant in Alaska.

While copper may be the new oil of the green energy revolution, a wide variety of industrial minerals and metals found in abundance in Alaska will be needed to build the envisioned low-carbon future.

In a 2021 report on the minerals and metals critical to low-carbon energy and transportation, the International Energy Agency estimates that a typical passenger electric vehicle requires six times the mineral inputs of a conventional internal combustion engine car and an onshore wind plant requires nine times more mineral resources than a gas-fired plant.

"Today, the data shows a looming mismatch between the world's strengthened climate ambitions and the availability of critical minerals that are essential to realizing those ambitions," said IEA Executive Director Fatih Birol.

From the graphite critical to lithium-ion batteries, silver for solar panels and EVs, and even the zinc required to build the green energy infrastructure, mineral explorers are advancing projects in Alaska with an abundance of the oft unsung industrial minerals and metals that are critical to international climate goals.

The envisioned low-carbon future is battery-powered and graphite is the single largest ingredient needed for the lithium-ion batteries currently going into EVs and storing intermittent wind and solar-generated electricity.

IEA forecasts that the electric mobility and low-carbon energy sectors will demand 25 times more graphite per year by 2040 than today.

And Alaska happens to host a world-class deposit of graphite to help fill this skyrocketing demand.

Coated spherical graphite is used as the anode material in most lithium-ion batteries and the purified powders could be used in more traditional graphite applications such as brake linings, lubricants, powdered metals, and steelmaking.

Graphite One's 2021 summer program focused on collecting the data needed for designing and permitting a mine at Graphite Creek.

This included 2,052 meters of resource upgrade and geotechnical drilling to collect the data needed for feasibility-level studies that provide more detailed plans of the mine.

"While the PEA demonstrated the project's economic viability, we expect these further studies with their optimized plans for the mine and processing facilities to support improved economics," said Graphite One President and CEO Anthony Huston.

The company expects the feasibility study for this potentially important U.S. source of graphite to be completed this year.

Amongst the unsung industrial metals needed to build a low-carbon future is zinc, which plays a central role due to its use in galvanizing renewable energy infrastructure against weathering. Zinc is particularly demanded by wind power generation, which needs about five metric tons of the galvanizing metal for every megawatt of power generating capacity, according to the IEA.

Zinc is also arising as an intriguing new lower-cost option for storing the intermittent renewable energy generated by wind and solar.

Zinc-air batteries are up to five times cheaper than lithium-ion counterparts with the same capacity. Industrial-scale installations of this burgeoning battery technology have begun in the United States and Australia, adding a new source of demand for Alaska zinc.

With the world-class Red Dog Mine in the northwest corner of the state and the Greens Creek Mine on the Southeast Panhandle, Alaska is already a significant source of the world's new zinc supply.

Operated by Teck Resources Ltd., the Red Dog Mine produces more than 1 billion pounds of zinc and 200 million lb of lead annually.

Seeking to extend this world-class zinc mine deeper into the 21st century, Teck is exploring other deposits in the larger Red Dog District.

Aktigiruq and Anarraaq, deposits on adjacent state land about five miles (eight kilometers) northwest of the Red Dog mill, are a likely source of this future ore.

Among the largest undeveloped zinc deposits on Earth, Aktigiruq has the potential to deliver ore to the Red Dog mill for 25 to 50 years beyond 2031, at current production rates.

Teck estimates that Aktigiruq hosts 80 to 150 metric tons of material averaging 16 to 18% combined zinc and lead.

According to the most recent calculation, Anarraaq hosts 19.4 million metric tons of inferred resource averaging 14.4% zinc and 4.2% lead.

In addition to Anarraaq and Aktigiruq, Teck is exploring the Lik zinc project on state land about 14 miles northwest of Red Dog under a 50-50 partnership with Solitario Zinc Corp.

While best known for the roughly 10 million ounces of silver it produces each year, Hecla Mining Company's Greens Creek Mine near Juneau, Alaska, also recovers significant quantities of byproduct zinc.

The more than 110 million lb of zinc produced helps to pay much of the cost of mining silver at Greens Creek and contributes to Alaska's current zinc output.

• Ambler Metals LLC's Arctic project (Northwest Alaska) – A 2020 prefeasibility study detailed plans for a mine that would produce an average of 192 million lb of zinc, 155 million lb of copper, 32 million lb of lead, 32,165 oz of gold, and 3.4 million oz of silver per year over a 12-year mine life.

• Constantine Mining LLC's Palmer project (Southeast Alaska) – A 2019 preliminary economic assessment outlined plans for a mine that would produce 1.07 billion lb of zinc, 18 million lb of copper, 1.7 million oz of silver, 9,000 oz of gold, and 270,000 metric tons of barite annually over an initial 11-year mine life.

Silver is another metal vital to building a low-carbon future that is found in abundance in Alaska.

These traits make silver critical to high-tech applications such as solar panels, EVs, and 5G networks.

Roughly 28% of the 8,000 metric tons (257.2 million ounces) of silver used in the United States during 2020 went into electrical and electronics devices; 26% into jewelry and silverware; 19% for coins and medals; and 3% for photography. The remaining 24% was used in a wide variety of other applications such as antimicrobial bandages, clothing; batteries; brazing and soldering; automotive catalytic converters; mirrors; and photovoltaic solar cells.

"Silver demand has evolved from a monetary ornamental use, to photographic, to digital, and now to energy," said Hecla Mining Company President and CEO Phillips Baker Jr.

And Hecla's Greens Creek Mine singlehandedly accounts for roughly one-third of the silver mined in the U.S.

Hecla's exploration typically replaces the reserves mined each year, which maintains a roughly 10-year mine life for the Southeast Alaska operation. This annual tradition continued into 2021 with drilling both restocking reserves and exploring growth areas well beyond the current mining.

"At Greens Creek, both underground and surface drilling are giving results that should lead to reserve replacement and additional drilling in the Lil'Sore area," Baker said.

Located about three miles northwest of the area currently being mined, Lil'Sore is particularly rich in copper and zinc. 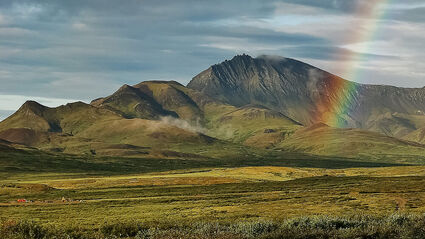 A rainbow touches down at Lik, an advanced-stage zinc-lead-silver project in the Red Dog District being explored under a 50-50 partnership between Teck Resources and Solitario Zinc.

Much like Greens Creek enjoys byproduct credits from the zinc and other metals recovered, the Red Dog Mine produces a significant amount of byproduct silver.

And with the same zinc-rich exploration projects being advanced across the state also enriched with silver, Alaska has the potential to continue to be a significant global producer of these two industrial metals needed to build the envisioned low-carbon future.