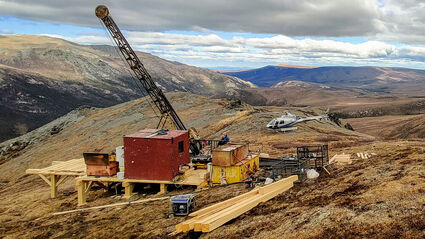 Kenorland Minerals Ltd., which has been exploring the Tanacross porphyry copper-gold project in eastern Alaska as a private company for several years, is now a publicly listed company with a strong treasury and extensive portfolio of mineral exploration projects in Alaska, Quebec, and Ontario.

As a private project-generating explorer, Kenorland entered into an agreement with Freeport-McMoRan to further investigate the potential at Tanacross, a more than 100,000-acre property that lies alongside the Yukon border about 50 miles northeast of Tok.

In a reverse takeover, Northway served as the vehicle for Kenorland to go public. In conjunction with this transaction, which was finalized early in 2021, Kenorland raised C$10 million through a brokered subscription receipt financing.

Flood, Kenorland Minerals Vice President of Exploration Francis MacDonald, and Haywood Securities Chairman John Tognetti were major participants in the financing. As a result, Kenorland reports that management, insiders, and close associates hold more than 65% of the company's shares.

With a strong treasury, Kenorland carried out a significant amount of exploration on seven projects in its portfolio.

This includes a 5,200-meter drill program at Healy, a 45,600-acre (18,470 hectares) gold discovery project about 28 miles (45 kilometers) southeast of Northern Star Resources Ltd.'s Pogo Mine in Alaska that was first identified by Newmont Corp. in 2012.

Northway cut a deal with Newmont to earn up to a 70% joint venture interest in Healy by completing at least US$4 million of exploration on the property by the end of 2022.

"The systematic regional exploration work completed by Newmont from 2010 to 2013 initially identified the presence of this significant gold system," said Flood. "When we optioned the ground in 2018, we continued the exploration efforts and have since then refined a number of high priority drill targets within these large-scale gold-in-soil anomalies."

This includes 10 shallow reverse circulation holes drilled at the Bronk zone, which includes one hole that cut 49.4 meters averaging 0.42 grams per metric ton gold from surface.

The company has also completed five line-kilometers of high-powered induced polarization and magnetotelluric geophysics over South Taurus, a large and undrilled porphyry target.

A planned 2021 drill program at Tanacross was postponed due to the slow turnaround on assays from the sampling, a problem that plagued many exploration companies across the North of 60 coverage area last year. 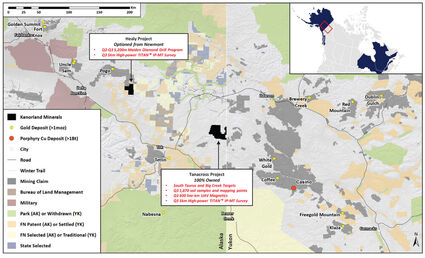 The newly listed company also explored the Chicobi and Hunter gold projects in Quebec; the Chebistuan gold and nickel-copper-platinum group element project in Quebec: and South Uchi gold and lithium project in Ontario.