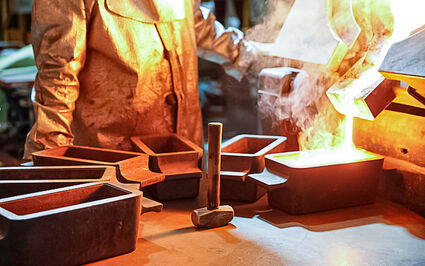 Under the Kinross Alaska strategy, around 400,000 ounces of gold is expected to poured at Fort Knox each year.

Kinross Gold Corp.'s strategy to leverage the underutilized 14-million-metric-ton-per-year mill and enormous tailings storage capacity at its Fort Knox gold mine to process higher-grade ore from projects within a roughly 300-mile radius of the Interior Alaska operation is a gamechanger for smaller high-grade gold projects and how the global mining company approaches exploration in the state.

Prior to the Kinross Alaska strategy, Fort Knox mill production was winding down. This would have marked the beginning of the end for the iconic gold mine.

Under this scenario, Kinross' presence in Alaska would have hinged on discovering or acquiring a gold project capable of supporting an economic mine worthy of a global mining company. Short of that, Kinross would have simply pulled out of Alaska after the last of the lower grade ore was stacked on the heap leach pad at Fort Knox.

With the Kinross Alaska strategy, however, the Fort Knox operation may be entering its best years in terms of gold production.

This enhanced production is coming from a combination of stacking ore mined from the Gilmore Expansion project on the new Barnes Creek heap leach pad and running higher-grade ore from outlying deposits through the Kinross Alaska mill.

In September, the company broke ground at the Gil Mine, the first Kinross Alaska satellite operation.

Although intriguing, the size and grades were not quite sufficient to justify the expense that comes with building a whole new standalone operation.

Without the expense and time required to build and permit a whole new operation, the Kinross Alaska strategy changed the dynamics for Gil.

Under the Kinross Alaska strategy, the company expects to produce 160,000 oz of gold from roughly 10 million metric tons of the larger Gil resource at an average mined grade of 0.60 g/t gold over the next roughly two years.

The shrunken footprint and increased economics of Gil underscores the brilliance of the Kinross Alaska strategy and what it could mean for the future of gold mining across a large swath of the state.

Eliminating the need for a mill, heap leach facility, tailings ponds, and other infrastructure, Gil Mine could be equated to a quarry. Even less, when you consider that Gil does not require the crushing and screening plants to size and classify sand and gravel.

As an operation that only needs to blast, dig, and load gold-rich rock into trucks for processing at the already established mill and tailings facilities means that Gil was elevated from concept to an active mine in just two years.

As a result, trucks are already delivering gold-rich Gil ore to the Kinross Alaska mill.

As a mine that lies a mere nine miles east of the Fort Knox mill on lands held by Kinross, Gil likely lies at the lower end of the grade threshold for projects developed under the Kinross Alaska strategy.

Kinross, which bought a 70% interest in Manh Choh from Contango ORE Inc., expects to produce 1 million oz of gold-equivalent from the project over a 4.5-year mine life slated to begin in 2024.

The US$18 million 2021 program at Manh Choh included in-fill drilling, engineering, and environmental work for a feasibility level study; exploration to test other intriguing targets across the 675,000-acre property; and community relations activities in the Tetlin area. 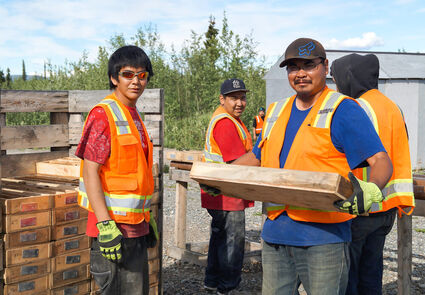 Residents from the village of Tetlin handling core from drilling that outlined the Peak Gold deposits at Manh Choh.

"There is an economic radius around Fort Knox given the mill capacity that makes a good chunk of Alaska attractive for potential bolt-on," Kinross Gold Chief Technical Officer Paul Tomory said.