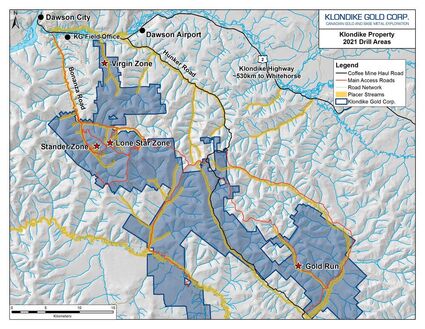 Considering itself the best-kept secret in the gold investment community, Klondike Gold Corp. focused its 2021 exploration on establishing the first industry-compliant hardrock resource in the legendary Klondike gold district near Dawson City, Yukon.

Klondike Gold's enormous 586-square-kilometer (226 square miles) property blankets a 50-kilometer- (30 miles) long stretch of the much of this historic district that has produced around 20-million-ounce ounces of gold.

In an ongoing effort to discover and expand upon the hardrock deposits that shed so much gold into the famed Eldorado and Bonanza creeks, as well as other streams in the Klondike, the company completed 7,687 meters of drilling in four phases during the 2021 season.

This exploration was carried out in four phases, each with its own targets and objectives.

The main component of last year's drilling, however, was carried out during phases two and three, which tested the Lone Star and Stander zones.

Located between the Eldorado and Bonanza creeks of Klondike Gold Rush fame, Lone Star is a 5,000-meter-long zone of gold mineralization that runs alongside the Bonanza fault.

Klondike's phase-two drilling tested an eastern extension of Lone Star with 12 holes and a potential 250-meter down-dip extension with 13 holes.

This drilling extended the Lone Star Zone by 250 meters to the east.

The 58-meter intercept bottomed out at 214 meters, the deepest so far at Lone Star.

Results from the 2021 and previous drilling at Lone Star are being incorporated into a maiden resource estimate.

This pipeline includes Stander, a zone about 1,300 meters southwest and running roughly parallel to Lone Star.

Formerly known as Nugget, Stander is the site of some of the highest-grade gold intercepts on the Klondike property. One hole drilled at Stander in 2019 cut 2.5 meters averaging 404 g/t gold and 415 g/t silver.

The 20 holes drilled at Stander during the third phase of 2021 drilling tested lateral and at-depth expansion areas.

The fourth phase of 2021 exploration included 13 holes along a 4,000-meter section of the Eldorado Creek fault. This included drilling at Gay Gulch, where a 2015 hole cut 2.8 meters averaging 75.6 g/t gold. This intercept is near where a 34-ounce gold nugget was recovered from the legendary Eldorado Creek and 250 meters upstream from where a 72-ounce nugget was recovered.

"The company is well positioned to rapidly advance the Lone Star zone as one among a number of 'pipeline' targets within our district-spanning 586-square-kilometer claim package that has excellent access to existing highway, power, communications, commercial airport and town infrastructure," said Klondike Gold CEO Peter Tallman.

This infrastructure is so excellent that a hungry driller can make a cell phone call for pizza delivery from Dawson City.