Newcrest expands presence in Northern BC 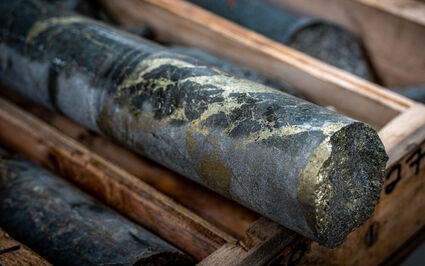 The 2021 drilling at Red Chris cut impressive gold-copper grades at East Ridge, a large resource expansion zone at the Northern BC mine.

In a bid to add the Brucejack Mine to its operations in British Columbia's Golden Triangle, Newcrest Mining Ltd. has entered into an agreement to pay roughly C$3.5 billion (US$2.8 billion) to acquire Pretium Resources Inc.

"We are delighted to be expanding our presence in this highly prospective region in British Columbia," said Newcrest Mining Managing Director Sandeep Biswas. "Brucejack is a tier one mine in a tier one jurisdiction and will deliver immediate production, free cash flow and earnings diversification to Newcrest and will fit seamlessly into our long-life, low-cost portfolio."

Located about 140 kilometers (87 miles) south of Newcrest's majority-owned Red Chris copper-gold mine, Brucejack is a high-grade underground gold mine that is estimated to produce 311,000 ounces of gold per year at an all-in sustaining cost of US$743 per oz, according to a technical report published in March 2020.

"Following due diligence, we believe that as the owner and operator of Brucejack we can build on the strong foundations established by Pretium and deliver significant additional shareholder value by leveraging our experience in operating epithermal gold mines and applying our exploration and innovation expertise to realize potential resource and reserve growth," added Biswas.

To realize this potential, Newcrest has offered to buy all Pretium shares it does not already own for C$18.50 each.

"The transaction delivers an immediate and compelling premium for Pretium shareholders that reflects the excellent work of our employees and contractors in developing and operating the Brucejack gold mine, while also offering an opportunity to benefit from potential upside as Newcrest shareholders," said Pretium Resources President and CEO Jacques Perron.

Newcrest has much bigger plans for this Northern BC operation.

More than 200,000 meters of drilling completed at Red Chris in the two years since Newcrest bought into the project has significantly upgraded and expanded the resources.

This resource formed the basis for a prefeasibility study published in October that details a block cave mine at Red Chris forecast to produce 4.9 million oz of gold and 1.5 million metric tons of copper from 406 million metric tons of ore over a roughly 31-year mine life. Additional gold and copper would be produced from the existing open pit.

Newcrest, however, says this PFS only captures a portion of the opportunities discovered at Red Chris. This includes pods of higher-grade mineralization that could bolster copper-gold output prior to block cave mining, and an eastern expansion area that could likely expand the underground operation.

"We are currently evaluating 'early mining' options for the high-grade pods in the East Zone with the aim of generating additional cash flows prior to the completion of block cave construction," said Biswas.

Imperial Metals Corp., which owns the remaining 30% interest in Red Chris, first encountered these higher-grade East Zone pods with a 2009 hole that cut 432.5 meters of 2% copper and 3.8 g/t gold. 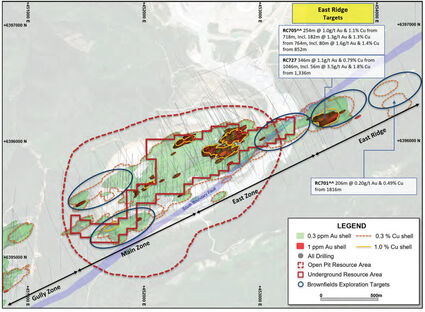 During 2021, the partners contracted Perenti Global Ltd. for the development of a 3,500-meter underground exploration decline at Red Chris that could be used to mine higher-grade ore from East Zone pods prior to block cave mining.

The pursuit of block cave mining at Red Chris alongside the acquisition of the Brucejack Mine to the south, Newcrest has quickly established itself as a major among the majors in Northern BC.

"The combination of Newcrest and Pretium will create the leading gold miner in British Columbia's Golden Triangle, operating both the Brucejack and Red Chris mines," said Biswas.