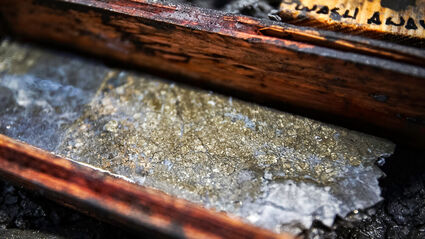 High-grade mineralization in the core from a hole drilled at Skeena Resources' Eskay Creek gold-silver project in the Tahltan First Nation Territory of Northern British Columbia.

As a testament to the enormous potential of Eskay Creek and Snip, as well as Skeena's responsible approach to bringing them back into production, Tahltan Central Government invested C$5 million to acquire 1.6 million shares of this company working in the Tahltan First Nation traditional territory.

"In partnering with Skeena, the Tahltan Nation is evolving and taking significant steps forward by becoming meaningful equity partners in these projects," said Tahltan Central Government President Chad Day. "Ownership provides the Tahltan Nation with a strong seat at the table as we continue our pursuit towards capacity building and economic independence for the Tahltan people."

Both located in the southern portion of the Tahltan Territory, Eskay Creek and Snip are home to historic underground mines operated by Barrick Gold Corp. from around 1990 until 2008.

Toward its vision of a new era of mining at both, Skeena is rapidly advancing what is shaping up to be a financially robust open-pit mine at Eskay Creek and has turned the reins at Snip over to Hochschild Mining PLC, a Peru-based miner particularly adept at mining high-grade gold deposits.

A prefeasibility study for developing a mine at Eskay Creek has confirmed what most have suspected – robust financial returns to the company that develops an open-pit mine at this historic gold-silver project in British Columbia's Golden Triangle.

Over a 14-year span ending in 2008, Barrick produced 3.3 million oz of gold and 160 million oz of silver at Eskay Creek from ore averaging 45 g/t gold and 2,224 g/t silver, which at the time made it the world's highest-grade gold mine and fifth-largest silver mine.

With strengthening precious metals prices, along with more than C$2 billion invested in delivering industrial power and other infrastructure upgrades in the Golden Triangle since the closure of Eskay Creek, Skeena cut deals with Barrick in 2017 for Eskay Creek and Snip, a nearby high-grade gold mine that was also operated by the global miner.

Since optioning Eskay Creek, Skeena has built a near-surface resource that supported its idea of developing an open-pit mine at this precious metal-rich volcanogenic massive sulfide project previously mined from underground.

This resource serves as the basis for a PFS that details an open pit mine at Eskay Creek that would produce 2.45 million oz of gold and 79.9 million oz of silver over a ten-year span from 26.4 million metric tons of proven and probable reserves averaging 3.37 g/t gold and 94 g/t silver.

The recovery plant at this proposed mine would process approximately 2 million metric tons of ore during the first year of operation, ramping up to 2.9 Mt/y in years two through four, and then settling into a 2.7 Mt/y rate as the hardness of the material increases during the final six years considered in the PFS.

The open pit gold-silver mine detailed in the PFS is expected to produce an after-tax net present value (5% discount) of US$1.1 billion (C$1.4 billion) and an incredible 56% after-tax internal rate of return. These calculations consider an average gold price of US$1,550/oz and a US$22/oz average price for silver.

Given the financial robustness of the operation, it is only expected to take 1.4 years to pay back the US$381 million (C$488 million) estimated costs to develop the Eskay Creek mine.

As impressive as these numbers are, Skeena has an even bigger and better vision for Eskay Creek.

While the April resource supports a financially robust mine capable of producing an average of 249,000 oz of gold and 7.22 million oz of silver a year for a decade, Skeena is working toward expanded reserves to support an even bigger mine to be detailed in a feasibility study slated for the first quarter of this year.

"We expect further increases to the annual production profile as we move to the feasibility study in Q1 of 2022, and beyond," said Coles. "Our goal is to create a mine producing 500,000 gold-equivalent-ounces per year for 10 years.

In addition to bringing new hardrock resources into the mine plan, Skeena is also exploring a potentially significant and easily processed source of ore in a facility holding waste rock from Barrick's previous mining at Eskay Creek.

Barrick's underground mine development was largely tunneled in the mineralized rhyolite in the footwall of the mudstone sequence that is host to the very high-grade gold-silver mineralization for which Eskay Creek is renowned. While much of this volcanic rock would be considered ore at today's precious metals prices, the rhyolite-hosted mineralization was deemed to be uneconomic due to the low prices of gold and silver during the previous era of mining.

As a result, this development rock, along with mill tailings, was deposited into the Albino Waste Facility southwest of the mine to be stored underwater.

Early in 2021, while there was still ice to support a drill rig, Skeena completed initial testing of the gold- and silver-enriched waste material and tailings stored at Albino.

Highlights from the eight holes completed during the initial phase of drilling included:

Considering the more than 15-meter thickness of this waste material with gold and silver grades comparable to current Eskay Creek reserves, the 128,900-square-meter waste facility could provide a sizable source of already mined material to the mine plan.

To further investigate this potential, Skeena launched a second phase of drilling at Albino designed to test the rest of the waste facility on 50-meter drill spacings. These 27 additional holes were completed from a waterborne barge.

Dependent on the results from this drilling, Skeena plans to return to Albino for a third phase of drilling to infill the drill spacing to 25-meter centers.

In combination with added resources at and around the near-surface deposits already delineated, this could potentially help boost reserves to a level that meets Skeena's objective of increasing the annual gold and silver production profile by about 10% in the feasibility study due out early this year.

As Skeena focuses its resources on advancing towards mining at Eskay Creek, the company has partnered with Hochschild Mining to do the same at Snip.

Under an option agreement that was finalized in October, Hochschild has agreed to invest roughly C$100 million on exploration and development to earn a 60% joint venture interest in Snip.

"The Hochschild team has a reputation for being among the best underground miners in the world for narrow, high-grade deposits and we are fortunate to have them as our formal partner on Snip going forward," said Coles.

Operated by Barrick Gold Corp. during the 1990s, the historic underground mine at Snip produced 1.1 million ounces of gold from 1.25 million metric tons of ore averaging 27.5 grams per metric ton gold.

Since acquiring Snip from Barrick, Skeena has invested roughly C$50 million on exploration and other work at the high-grade gold mine project.

Under a 2018 option agreement, Hochschild can earn a 60% interest in Snip by investing no less than twice what Skeena has already put into exploration and development at the high-grade gold property over the three-year option period.

At least C$7.5 million must be invested each year beginning on Oct. 14. After completing a minimum spend of C$22.5 million, Hochschild may extend the option period by a year by paying Skeena US$1 million in cash.

As long as the option remains in good standing, Hochschild will be the operator at Snip moving forward, and upon completion of its earn-in, a 60-40 joint venture would be established between the parties. The option agreement also provides Skeena with C$15 million of dilution protection in the event that Hochschild's investment in Snip exceeds the requirements.

"Skeena's shareholders will benefit from Hochschild spending a potential C$115 million at Snip, before the company would be required to contribute. This will allow the Skeena management team to focus resources on aggressively exploring and advancing Eskay Creek," said Coles.