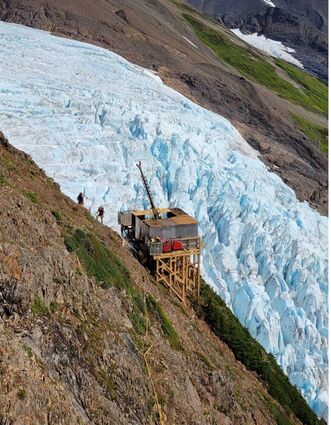 Glacial ice along a cliff face near the drill pad at Edge Zone, a recent addition to Willoughby.

The company began its 2021 season at its Porter silver property on Mount Rainey – overlooking Stewart, a town at the southern tip of the Golden Triangle – as sampling discovered new high-grade silver veins from the historic mines.

StrikePoint believed early on that the ore mined from Prosperity-Porter Idaho could represent opposite ends of a larger mineralized system that extends for 2,350 meters through the mountain, and recent glacial retreat has exposed more of the ground between these past-producing mine sites, making it easier to explore for a connection.

This new vein is located 130-meters west of the historical adit and the terrain along strike to the south and west of the new trend remains open and highly prospective for additional exploration work.

In June, drilling began with an initial phase at Porter to target extensions of known veins and to test a 2,300-meter-long target between the historic silver mines.

In addition to the exploration at Porter, the company continued unlocking the gold-silver potential at Willoughby, which lies roughly four miles (seven kilometers) from Ascot Resources Ltd.'s Red Mountain Mine project.

Two of the six holes drilled at Willoughby in 2020 tested a new area dubbed the Edge zone, which hosts at least three styles of mineralization in eight known areas, two of which were tested by a 1,715-meter drill program completed in 2020 as well.

Due to this discovery, the company mobilized a second rig to follow up on the high-grade gold intercepts found at Willoughby during the 2021 season. 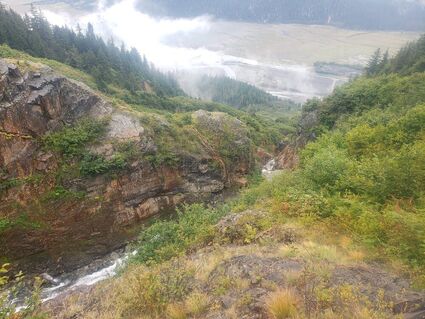 A beautiful vista from StrikePoint's Porter property near the base of Mount Rainey.

Due to "visually encouraging mineralization," the company completed 4,050 meters of drilling in 17 holes to test extensions of multiple high-grade targets at Willoughby.

This included testing extensions along strike of the Edge zone mineralization from the 2020 surface sampling program and testing the extension of the mineralized horizon to the southeast, intending to connect mineralized zones from the recent and historical drill programs.

In addition to the drilling, the 2021 fieldwork at Willoughby and Porter included detailed field mapping and sampling to follow up on all of the high-grade gold and silver mineralization identified during the 2020 program.

Highlights from the surface exploration program include the discovery of new massive sulfide mineralization at North zone and strong gold mineralization encountered in chip sampling at the Edge and Icefall zones.