By Rose Ragsdale
For Data Mine North 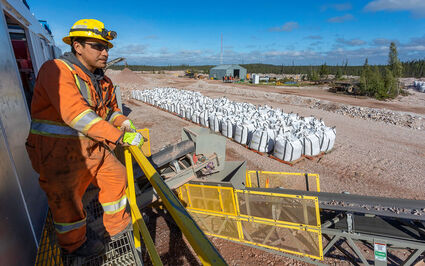 When Vital Metals Ltd. purchased the rights to mine the mineral resources in the upper zones of the Nechalacho rare earth project from Avalon Rare Metals Inc. in 2019, the Australian junior hit the ground running. And the rest is history. Literally.

In July, Vital Metals became the first company to produce rare earth minerals in Canada – a country known to host vast undeveloped quantities of this suite of coveted elements. Vital is also only the second company to mine rare earth elements in North America.

Avalon Advanced Materials Inc. initially focused exploration at Nechalacho on the heavy REE-rich Basal Zone deposit, which was the subject of a positive 2013 feasibility study. Avalon and predecessor companies invested more than C$120 million in exploration of the property.

It is the high-grade, near-surface light rare earth (bastnaesite) resource enriched with the key magnet minerals, neodymium and praseodymium, that drew the eye of Australian miner Vital Metals because of its potential for near-term, small-scale development.

In June 2019, Avalon and a Vital subsidiary, Cheetah Resources Pty Ltd., signed an agreement under which Cheetah purchased majority ownership in the near-surface T-Zone and Tardiff Zone resources at Nechalacho for C$5 million. Avalon retained ownership of the property's mineral resources below a depth of 150 meters above sea level (including the Basal Zone deposit) and will continue to have and mining purposes. Avalon also continues to assist Vital, where needed, in executing its planned work programs, and it also retains a 3% net smelter royalty in Vital's project.

Today, Vital says its goal is to become the largest independent supplier of clean mixed rare earth feedstock outside China.

Cheetah began mining ore from the North T zone starter pit at Nechalacho in July, extracting some 28,000 metric tons of ore at the project during the season.

The Vital subsidiary used a TOMRA x-ray transmission sorter to upgrade the ore mined at North T to a concentrate expected to contain greater than 30% rare earth oxides.

Without the need for a complex processing facility or tailings storage, workers at Nechalacho simply crushed and sorted near-surface rock in a setting similar to a gravel quarry, identifying the best material with little or no water and zero chemicals.

The startup of the mining operation coincided with strong price gains for the neodymium and praseodymium found in the T zone. This reflects strengthening demand, especially among manufacturers of electric vehicles.

Thor Lake, located 100 kilometers (62 miles) southeast of Yellowknife, has good access to markets through its proximity to Great Slave Lake, providing access by barge in the summer and ice roads in the winter. Hay River is a nearby port with an existing barging terminal, railhead, and is accessible year-round by an all-season highway.

Vital reported in late October that preparations to ship some 500 one-metric-ton bags of ore from Nechalacho to Saskatoon, Saskatchewan, where the company is building a 1,000 metric-ton-per-year rare earths extraction plant.

"Construction of our custom-built facility is underway at the same time as the SRC Rare Earth Processing Facility being built by Saskatchewan Research Council, and it's exciting to see this 'rare earths' hub start to take shape in Saskatoon," Atkins said in October. "Our first shipment of ore is due to leave Nechalacho this month, and we expect to start feeding into the plant before the end of calendar year 2021, with commissioning to follow."

This represents a 50% larger plant throughput than initially planned, which gives Vital the option to double its production in the future.

The company also signed an agreement to assist the SRC with technical support for its REE processing facility, which is adjacent to Vital's extraction plant.

Vital said its first ore shipment should supply the first nine months commissioning of the REE extraction plant, with further deliveries to be scheduled as required.

With the first feed at the Saskatoon Extraction Plant set for December, Vital expects commissioning activities to continue through the first half of 2022.

Vital intends to produce a minimum of 5,000 metric tons of contained REO at the project by 2025 and has signed offtake agreements with Norway-based REEtec for Stage 1 production with a supply of 1,000t REO (ex-Cerium) per year.

Under an amended agreement signed in early October, Vital will sell a rare earth carbonate product containing at least 750 metric tons of praseodymium and neodymium within 2,000 metric tons per year to REEtec for an initial five-year period.

This is a 50% increase over the commitment of midstream rare earths products containing 470 metric tons of praseodymium and neodymium stipulated in an earlier pact between the companies.

Vital also signed a non-binding memorandum of understanding in late October with Ucore Rare Metals Inc. for a supply of a mixed rare earth carbonate, beginning in the first half of 2024.

Ucore's Alaska Strategic Metals Complex facility is scheduled for commissioning in the first half of 2024, with an initial 2,000 short t/yr. TREO separation and purification capacity, ramping up to at least 5,000 t/yr. TREO by 2026.

Geoff Atkins, Vital Metals' managing director, said the MOU will position Vital as a key supplier of rare earths in the North American market, building on its offtake agreement with REEtec in Europe.

"We are continuing to grow our operations in Canada and are well-placed to supply both geographies (North America and Europe) with the complete suite of rare earths," he said.

Toward that end, Vital recently agreed to purchase 68% and 100% interest in Quebec Precious Metals Corp.'s Kipawa and Zeus heavy rare earth projects in Quebec, respectively, for C$8 million, to be paid in increments over five years

In February 2021, Vital began exploration with plans to drill test three high-grade targets in the Tardiff deposit, zones 1, 2, and 3, and to evaluate potential expansion of the T Zone by targeting two additional zones, the South T and S zones, which lie adjacent to the North T pit, where the mining took place in 2021.

Vital said the drill program will assist in developing a mine plan for a stage 2 operation, drawing on ore from the much larger Tardiff deposit and defining additional resources in the vicinity of the pit where mining began in July.

The 30 holes drilled last year were driven to a depth of 72 meters. The explorer drilled holes in Tardiff zones 1 and 3 on 25-meter-by-25-meter spacing to upgrade resource confidence levels for mining and processing studies.

Holes across Tardiff zones 2 and 3 will also help define the company's stage 2 mine plan. The drill program is part of Vital's plan to transform Nechalacho into a larger-scale, longer-life rare earths project.

All the holes intersected thick intervals of total rare earth oxides, grading more than 2% TREO. The best results from the five holes drilled in Zone 2 include 25.1 meters averaging 3.03% TREO and 19 meters at 2.05% TREO. 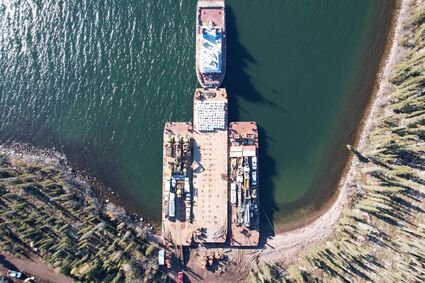 Nechalacho rare earth ore concentrates being loaded on a barge bound to Hay River, were they will be shipped by truck and rail to Vital Metals' processing facility in Saskatchewan

With high-grade mineralization remaining open at all zones in all directions, Vital said it will undertake additional drilling to find the boundaries of the three Tardiff zones and identify the relationships between the zones.

Further drilling in these areas in 2022 will provide a better understanding of the mineralization and determine if the three zones are connected, the company added.