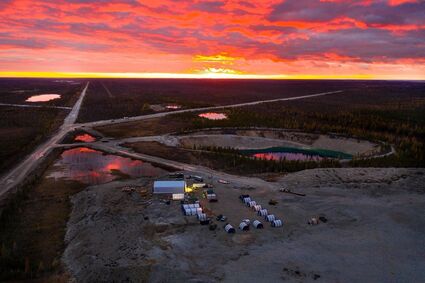 Overlooking the historic Pine Point project in the expansive Northwest Territories of Canada.

Advancing the historic Pine Point project, Osisko Metals Inc. spent 2021 proving that the zinc-lead project had more to give, on a zinc-only basis, enough to give that could rank it within the top ten in the world.

This outlines a present mine at Pine Point could produce an average of 327 million lb of zinc and 143 million lb of lead annually over an initial 10-year mine-life, while the numbers do not compare to 1960s era mining, it can still be considered a potentially robust mine.

And in March 2021, an infill hole returned some of the highest grades ever found at Pine Point, further cementing the project's viability.

The first batch of four holes reported by Osisko came from the R190 deposit at West Zone, an area of the Pine Point property that hosts higher-grade, vertical prismatic deposits.

Osisko stated that both holes met expectations with respect to the current resource block model and provided infill spacing required in their immediate area of the X25 deposit for indicated resource definition under the 2020 PEA.

While the full 13,000-meter summer-fall program largely focused on infill drilling to upgrade inferred resources to the higher confidence indicated category, at the end of September the company had its expectations surpassed once more.

Results from its Z60 deposit in the North Trend area, revealed the development of local prismatic-style mineralization in drill holes Z60-21-PP-001 and -006.

These intercepts, along with neighboring tabular mineralization, has been determined to be associated with a fault trending south-west to north-east, while other holes returned grades consistent with previous historical intercepts.

Core from drilling into high-grade zinc mineralization at the Pine Point project.

While the drilling was successful, Osisko was also undergoing hydrogeological testing in the hopes of reducing costs related to dewatering identified in a 2020 preliminary economic assessment for Pine Point.

Testing undertaken last year confirms that discrete faults and not whole aquifers are responsible for water flowing into the zinc-rich areas at Pine Point, which is much easier and less costly to manage.

"This is very different from aquifer models used in the 2020 PEA, which resulted in very expensive life-of-mine dewatering estimates. Stated simply, managing water influx along discrete zones is much simpler and cheaper than managing an entire aquifer," said Osisko Metals Chairman Robert Wares.