While modern operations begin again at the historic Lucky Shot, a story of the District tells the value of mining in Alaska North of 60 Mining News – March 4, 2022 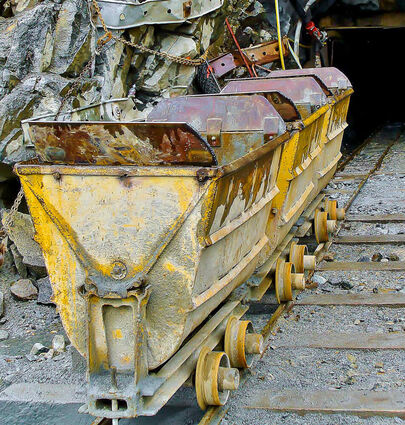 An ore cart sits outside a portal at the historic Lucky Shot gold mine project in Southcentral Alaska.

Roughly a 90-minute drive from Anchorage, it can be easy to miss Willow as one makes their way northbound. The view of Denali on the horizon, perhaps a visit to the Princess Lodge or a journey to Fairbanks. Even many lifelong residents may miss it for the more scenic destinations such as Talkeetna, yet the short blip that is Willow used to mean a lot more than buying fireworks.

From 201 residents at the start of the new millennia to 190 in 2020, not much has changed in the sleepy little village located on the George Parks Highway, yet its history can be traced back to even before the Klondike Gold Rush.

If you are a little more involved with Alaskan traditions, you might know that the official start to the Last Great Race, the Iditarod, actually begins in Willow, while the ceremonial start is held in Anchorage during the yearly Fur Rendezvous Festival.

Today, Willow is home to a fair share of modern dog sled mushers, as many of its residents are past and present participants of the 1,000-mile ride to Nome.

However, over half a century ago, Willow was home to a small but important lode-gold mining district along the southern border of the Talkeetna Mountains in southern Alaska.

According to the "Geology and Ore Deposits of the Willow Creek Mining District, Alaska," written in 1954, gold production up to 1950 was somewhat less than $18 million, or roughly 5% of Alaska's lode-gold output.

Yet, before the massive influx of lode-gold, placer gold was first discovered along the banks of Willow Creek as far back as 1896.

It would not be until 1906 when Robert Hatcher, for whom Hatcher's Pass is named, that the Willow Creek Mining District would be first staked. Afterward, many would-be prospectors would buy claims from Ol' Hatcher himself and reap the rewards from his wanderlust into this gold-rich region of Southcentral Alaska, also known as Independence Mine or Hatcher Pass District.

While a pass in the Talkeetna Mountains carries his name, Robert Lee Hatcher's bones rest in an unmarked grave, and his contributions to mining in Southcentral Alaska are generally unknown.

As a young man from a cattle ranch in the rolling grasslands of north-central Texas, Hatcher got his first taste of gold prospecting in White Oaks, New Mexico. He went north in 1888, at the age of 21, and honed his skills prospecting in Atlin, Canada, and Southeast Alaska for a decade before moving on to Southcentral Alaska.

It was then, in September of 1906, when Hatcher began the lode gold mining boom in the Willow Creek Mining District by recording a quartz-gold claim high on the treeless, granite slopes of Skyscraper Mountain, nearly 5,000 feet above sea level.

The outcrop was 1,200 feet above the floor of Fishhook Valley and 200 feet from the crest of the Skyscraper peak in an area of the Talkeetnas we now call Hatcher's Pass, fifty miles northeast of where Anchorage would be established a decade later.

Hatcher sold one-fourth interest in his quartz-gold ledges to a Knik merchant and placer miner for less than $1,500, payable half in cash and half in grub.

For several decades, Hatcher would continue his work in the District, discovering many famous lode-bearing zones that eventually led to mines.

From the first discovery on Skyscraper, which became the basis for the Independence Mine developed in the 1930s, to a discovery on Groundhog Creek in Moose Pass, about 34 miles out of Seward, Hatcher traced his way throughout much of the rugged wilderness of the Last Frontier.

After marrying in 1911, at age 44, Hatcher went on to make other major strikes in the Willow Creek district and on the Kenai Peninsula.

Later, he would prospect and mine in Nuka Bay, southwest of Seward, and worked the Old Gilpatrick mine in Moose Pass. Nonetheless, first and foremost, Hatcher was a prospector with a good eye for quartz veins, and rather than mine, he preferred being on horseback or on foot with his dog "Blue," searching the mountains for the next lode strike.

After the first World War, his wife would leave Alaska due to poor health, while Hatcher would continue to prospect and mine, ending his career in the Talkeetna Mountains and moving his remaining efforts along the Kenai Peninsula.

At this point, as president of the United Mining and Development Company, Hatcher would spend some time in Seattle in 1938 raising money to develop the Gilpatrick property at Moose Pass. His reputation as a lode gold expert made it relatively easy for him to get financial backing, even during the Depression and after his failure at the Gold Mint Mine.

In the 1940s, when he was in his seventies, he was still staking gold claims on the Kenai Peninsula, with the most notable of these strikes occurring near Hope.

However, just before this, in 1939, Hatcher joined with other pioneers to organize the Alaska Miners Association in response to new federal legislation on wage and hours.

Nonetheless, all his efforts would be for little remembrance, as in the summer of 1943, Robert Lee Hatcher, "the man whose gold discoveries set in motion Independence, Martin, Talkeetna, Jam, Ray Wallace and Gold Mint" mines in the Willow Creek Mining District, celebrated his seventy-sixth birthday in Anchorage by announcing yet another gold discovery near Seward.

Heralding the new find "as the greatest discovery of his career," Hatcher showed his ore samples around Anchorage, but by this time, little interest remained even though the estimated value was "about seven dollars a ton."

Gold mines were no longer a good investment.

After many began to close due to the United States War Production Board deeming gold mines nonessential to the war effort, most were ordered to close during World War II.

In the end, in 1950, at the age of 83, Hatcher was found in his cabin on Ptarmigan Creek, 23 miles north of Seward. He was paralyzed on his left side and unable to speak.

When he died in the Seward hospital a few days later, the local newspaper reported that "very little is known about him here except that he prospected and mined."

Today, his remains are in an unmarked grave in the Seward Pioneer Cemetery.

His life's work was not forgotten, however, as he was eventually inducted into the Alaska Mining Hall of Fame, and the remnants of his discoveries exist today in what is historically considered the third-largest lode-gold producing district in Alaska, having produced 624,000 ounces of gold in its heyday.

In 1938, the two were brought together under one company, the Alaska-Pacific Consolidated Mining Company (APC).

With a block of 83 mining claims, APC became the largest producer in the Willow Creek Mining District, with the claims covering more than 1,350 acres and included 27 structures.

In its peak year, APC employed 204 men, blasted nearly a dozen miles of tunnels, and produced about 35,000 ounces of gold.

After the War Production Board designated gold mining as nonessential to the war effort, gold mining throughout the United States ground to a halt; however, the Independence Mine was permitted to continue operating as the presence of scheelite, an ore of the strategic mineral tungsten, was found to occur in the quartz lodes.

Nevertheless, Independence Mine would still be ordered to shutter its operations in 1943.

It would not be for nearly four decades that mining interests would return to Hatcher's Pass, but by this time, all the momentum and excitement of the Klondike Days had long since been extinguished.

In its prime, besides the largest Independence Mine, several other mines sprouted throughout the Willow Creek District, including the Gold Bullion Mine, which produced roughly 77,000 oz of gold, the Fern Mine, which produced nearly 44,000 oz of gold, the Martin Mine at 28,000 oz, the Gold Cord Mine at 16,000, the War Baby mine, and finally one of particular importance, the Lucky Shot mine.

Between the years 1919 and 1940, combined production from War Baby and Lucky Shot produced approximately 252,000 oz of gold, with some copper mixed in.

The reason for its importance? For the first time in over 80 years, modern mining will return to the Willow District as Contango ORE Inc. acquired full ownership of the historic mine.

The lure of gold brought many to the upper Cook Inlet area, some of whom eventually moved to Anchorage. Brothers Eugene and William "Byron" Bartholf, members of a New York and Colorado mining family, arrived in Knik in 1906, hell-bent on prospecting for gold in the rumored Willow Creek District.

Their search for gold would pay off, as in 1907, high on the side of Bullion Mountain overlooking Craigie Creek, they struck a lode.

Eugene and Bartholf quickly returned to Seattle, telling of their discovery to relatives and friends. The rich vein of ore supposedly encircled the entire mountain. Hence, the following spring, the two brothers returned with horses and equipment and started developing Gold Bullion No. 1 Claim. Hauling ore down a mountain in one-hundred-pound sacks, only to pile it up at the base and climb back up. When enough sacks of gold-rich ore were stockpiled, they would be loaded on packhorses and taken to tidewaters by Knik.

In 1910, Byron Bartholf's family arrived in Knik, with the children being promptly enrolled in the first school, and his son John joined him in the mining business.

While out hunting ptarmigan and prospecting, Bartholf's 16-year-old sons Chester and Ralph Bartholf made a lucky discovery.

After landing a clean shot on a nearby bird, they noticed a hole where a "whistler" or marmot had its den.

In front of the hole, Chester found a large chunk of quartz. Picking it up, he shouted to Ralph, "I found gold, and it is rich." And he was right: it was rich. So the family honored their lucky hunting expedition by calling this the Lucky Shot mine.

The Bartholfs would later go on to construct the infrastructure needed to put the mine into full production while the family would further leave its mark on Alaska.

Moving forward, the second-generation Bartholfs, Charles and John Tyler, remained in Alaska, with Charles listed in the 1930 U.S. Census for the Willow Creek mining district as being a mining superintendent. His son Richard, fifteen, lived with him. However, William "Byron" Bartholf and his son, Chester, moved to the west coast in 1918. 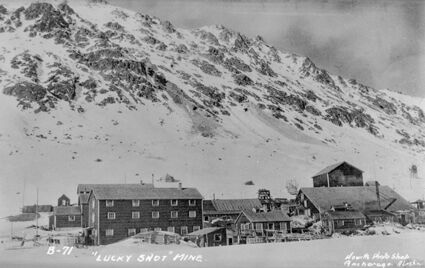 The Lucky Shot gold mine in the Willow Creek Mining District, circa 1930.

Finally, the Bartholf family left their mark in the annals of the Alaska mining industry and, in particular, the Willow Creek mining district. With the family tree being nearly a book in itself as there are dozens of great-grandchildren, grandchildren, cousins, nieces and nephews living all over the United States to this day.

As for the Lucky Shot, announced late last year, a modern company is going to try its luck at the historic mine and maybe true to its name, it will be an exciting prospect for Contango ORE.

"Contango is well positioned, with experienced personnel and capital, to explore and expand the historic high-grade resource at Lucky Shot," said Contango ORE President and CEO Rick Van Nieuwenhuyse. "We feel the exploration potential of the Willow district is excellent, albeit perhaps under-appreciated."