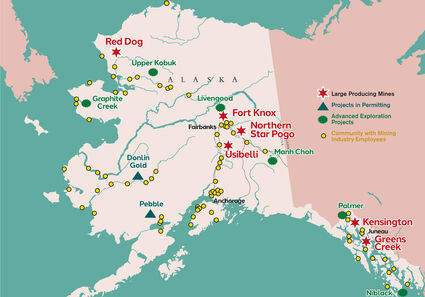 Since World War II there may not be a more urgent time to produce Alaska's rich mineral resources. Our nation's immediate defense needs and commitment to clean energy all require a healthy, vibrant mining industry to give our country the security of domestic critical mineral production and the bridge to future clean energy technologies.

Crisis brings clarity, and quickly subordinates ideology to real-world practicality. Today we see our globe reeling under the actions of Russian President Vladimir Putin, a paranoid madman running an autocracy that is terrorizing Europe, brutally attacking a free democratic neighbor, and crippling the international economy. These sobering events require clear-headed policy responses that prioritize national security and reduce dependence on the whims of foreign despots to sell us critical minerals without which we cannot survive.

According to the United States Geological Survey, our country is 100 percent import-dependent for at least 23 critical and strategic minerals and between 50 and 99 percent dependent for another 30 key minerals. Is this a problem? Yes. Two of the five countries we are most dependent on for critical minerals are Russia and China. No one would accuse them of being a friend to democracy.

The simple truth is our current strategic mineral dependency is not a shortage of geologic resources, Alaska is among the richest mineral jurisdictions in the world. It's our political kowtowing to extremist views more concerned with government forcing radical change than with affordable and reliable energy and who parrot a narrative about past mining industry sins that no longer represent the modern industry of today.

With Russia on the verge of expanding its assault into Europe, North Korea test-launching nuclear-capable Intercontinental Ballistic Missiles, and China aiming to capitalize on the chaos to strengthen its own world position, it's now all-hands-on-deck for democratic governments.

As free people whose existence is an affront to autocracies, we must insist on moving beyond deceptive either-or fallacies of activists in non-profits and our federal bureaucracies, which, perhaps unwittingly, imperil our national security and undercut justice in their effort to prevent all possible development of our lands and resources, take self-determination from our people, and trample singular opportunities to move families and communities out of poverty into the full economic life of our state.

Alaska's ongoing struggle for fair and responsible development of our state resources is not a fight without cause.

Failure to mine our resources ensures that the same resources will be mined in other countries-under-documented appalling child labor and environmental conditions, all because we refuse to produce it at home, only use it at home. That's not earth justice, folks, that's ideological activism that is increasingly harmful to our world and our national security.

Alaska's mining industry has worked tirelessly and successfully to transcend the historical shortcomings of yesteryear and set the industry standard of benefitting host communities and protecting the environment. Our producing mines and projects in permitting from the Red Dog zinc mine up North to Hecla Greens Creek mine and Bokan-Dotson Ridge project in Southeast are all building a future that is made in Alaska, protecting America, and providing workforce development and highly paid jobs to local families and communities.

Our First Alaskans, through the Alaska Native Claims Settlement Act, guard access to most of our state's natural resources and for millennia balanced traditional and economic needs managing the environment in a manner that did not exhaust or extinguish it. The path to a successful mine goes through our First People. In these tumultuous days, it is good to remember the Alaska Native and American Indian peoples are the demographic groups with the highest rate of military service to our country. I would submit they need little help balancing concerns of national defense and environmental protection.

Our nation's abundance has allowed us the self-indulgence to use our opinions as play toys to swat at each other. However, when tough times come, we stop the games and rally around our common commitments to liberty, self-determination, and peace. When these are threatened, we close ranks as one people, and we act.

A perilous hour is now upon us. The dangers of a critical and strategic mineral supply disruption have been highlighted by the USGS year after year for two decades, and we should all be staggered by our failure to react effectively against this vulnerability. I hope we can produce the concentration of mind capable of lifting our efforts to the level of urgency our situation now requires.

This is not an argument for an opportunistic free pass to our mining industry to produce critical resources without proper regulation. It is a clarion call to our elected and appointed leaders that the safety of our country cannot be effectively maintained under our present 20-year timeline from mineral discovery to commercial production. We must find ways to come to an agreement on the safe and timely production of our strategic mineral resources. Our lives, liberties, and our way of life depend on it.

Chuck Kopp is a policy consultant, commercial fisherman, former member of the Alaska House of Representatives, and a lifelong Alaskan.