There is something wrong, very wrong

When it comes down to brass tacks, the salmon fishery in Southwest Alaska may not be the big factor in EPA's decision North of 60 Mining News – June 3, 2022 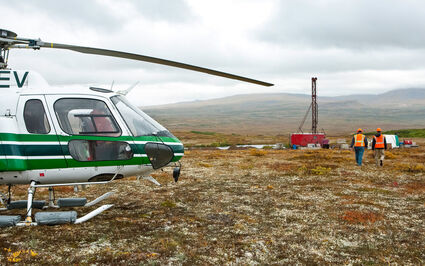 A helicopter at a drill site at Pebble, which hosts a world-class copper-gold-silver-rhenium deposit on state land in SW Alaska.

Recently, the Environmental Protection Agency, citing section 404(c) of the Clean Water Act, announced its intention to prohibit the use of the Bristol Bay watershed for discharging dredged or fill material from the Pebble Project. Both of our Senators issued statements giving qualified support for the proposed decision.

Senator Murkowski, however, took the position that she has "never supported a blanket, preemptive approach for any project" recognizing "that this could be used as a precedent to target resource development projects across our state."

Senator Sullivan, similarly, stated that he endorsed EPA's position although he has "consistently opposed the EPA's pursuit of preemptive authority over resource development projects on state lands in Alaska ..."

Despite their hearts being in the right place, it appears that their heads have somehow been turned in the wrong direction.

Senator Murkowski, for instance, seems to have bought into the conclusion that the Bristol Bay fishery would be at risk if the Pebble Project were to go forward. This perception seems to be grounded on something other than the facts.

No one wants to endanger the fishery, but mining and fishing have co-existed in Alaska for a very long time. One of our classic fisheries takes place on the Copper River, which flows past the site of the historical Kennicott Mine. A mine which, by the way, is a National Park Service destination.

If the science does not justify EPA's decision, then it is appropriate to explore why our delegation is on the wrong side of this issue.

We know these things. First and foremost, the EPA is a rogue agency. Its charge in statute and in case law is not to stop development but to advance development in ways that are consistent with environmental values – essentially to force science to minimize degradation. No one argues that Pebble has not invested millions of dollars in pursuit of that goal.

Accordingly, it is appropriate for EPA to set a doable standard, and when that standard is met, to clear the project. It used to be called "getting to yes," but EPA roguishly has no commitment to "yes."

Another fact that we know is that the Bristol Bay fishery has a lot of flaws associated with it. Granted we all want fishing to survive and succeed; however, when you get down to splitting hairs, it's not the fish we are talking about in this instance.

The fishery is not an economic positive. Every fish sold out of the Bristol Bay fishery costs the State more than it brings in. The bulk of the profit from harvesting this resource winds up in Seattle, not Alaska. If the fishery were taxed at the same rate as other resource development industries, the market for the fishery would disappear.

Fishing in Southwest Alaska is a huge cultural asset, and that is where the issue lies. Residents of the area justifiably want to protect their primary resource. No one disputes or objects to that. In context, however, Southwest Alaska is the most poverty-stricken region of the State, and the development of one or more local mines would advance a cash economy that would benefit the entire area.

It must be noted here that the entire Bristol Bay watershed and surrounding area is blanketed with State of Alaska mining claims, so what happens to the Pebble Project impacts much more than that one potential mine. This fact would play into the EPA's "cumulative impact" thesis, except that it doesn't. One mine or a dozen mines in the area would not put the fishery at risk, given the mountains of permits and stipulations that would be imposed by both State and federal agencies before a shovel of dirt could be turned.

Both of our Senators rightly observe that the EPA determination would set a bad precedent but acquiesce in the proposed determination anyway.

In a vacuum, that would probably make sense, but Alaska is not a vacuum. In addition to fisheries, we have a potential timber industry that has been gutted by opposition from the Environmental Industry. We have an oil and gas industry, which a lot of people have heard of, but few have seen. The closest some people come to seeing what oil and gas does to the Alaska environment is when they happen to come across an above-ground section of the trans-Alaska pipeline and have their picture taken.

We also have a mining industry in the State, which is somewhat more visible, if only because it is a part of the legacy of Juneau and Fairbanks and Nome – prosperous communities that started with a mine.

If impact on fishing is not what is driving the pending EPA determination, and science does not support blocking the Pebble Project, then the dispositive factors must be found elsewhere.

As the Senators quite rightly suggest, the 404(c) decision is a precedent, but unlike "most Alaskans" as Senator Murkowski has put it, there are a lot of people who drive cars and use computers and live in cities far away that regard mining as a bad thing.

It has always baffled me why those who use the fruits of the earth don't realize that the valuable minerals make up only a tiny fraction of the host environment. When it comes to gold mining, for instance, one-tenth of an ounce of gold in a ton of rock is a pretty high-grade deposit.

Obviously, some mineral deposits are richer than others. In context, Alaska has a plethora of metal-rich deposits, but few are mined primarily due to regulatory barriers. Pebble is not unique in that regard. The list of environmentally friendly and otherwise meritorious projects that have been delayed or totally blocked over the past 50 years is very long.

The Pebble precedent is in our face. EPA should be scolded by our Senators, not encouraged; and any censure should be long enough and loud enough for the nation to take notice.