Fingerprints of the Earth in obsidian

Volcanic glass was one of the first rocks mined by Man; its history adds to the necessity of mining as a species, evolution North of 60 Mining News – August 5, 2022 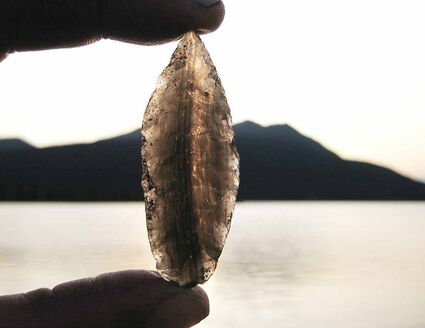 Despite its fragile appearance, obsidian, or volcanic glass, has been used for thousands of years as a crucial tool for survival.

Unlike the European prospectors seeking the gold, silver, copper, and the New World's wealth of other metals, oftentimes First Nations, Native Americans, and Indigenous peoples throughout North America sought a different rock that was precious to their very survival, obsidian.

From as far north as the Gates of the Arctic national park to as far south as the Gulf of California, and even eastward and at the bottom of the Great Lakes, this microscopically sharp volcanic rock has been found wherever ancient peoples once lived and still live, in the United States and Canada.

This black volcanic glass was valued in prehistoric cultures because, like flint, it could be fractured to produce sharp blades or arrowheads in a process called knapping – basically precise strikes with a stone and shaping with bone to sculpt the obsidian.

In this way, game could be hunted; meat and fish could be portioned and cleaned; hides, pelts, and furs could be skinned; even personal grooming would be easily achievable through the use of obsidian, as it is now known that this cooled lava can fracture down to a single atom and is so impressively sharp that it has a cutting edge five hundred times sharper than the sharpest steel.

To add to its impressiveness, when examined under a high-magnification microscope, a blade of obsidian will appear smooth, whereas even the finest forged steel will have a saw-like edge.

Recognizing the value of such an easily workable yet incredibly useful raw material, ancient peoples would travel far and wide to obtain large clumps of this black glass, knapping it down into multiple arrowheads, knives, and in some parts of the world, mirrors.

For a long time, obsidian was thought to be first utilized by pre-Columbian Mesoamerican cultures such as the Maya, Olmec, and Aztec – the Mayans are even credited with the first use of obsidian blades nearly 2,500 years ago – as their knowledge and use of obsidian were extensive and sophisticated; including carved and worked obsidian tools and decorative objects.

Mesoamerican craftsmanship of obsidian even went so far that the Aztecs developed a type of sword with obsidian blades mounted in a wooden body, called a macuahuitl (mah-kwa-hit-el), which could inflict terrible injuries by combining the sharp cutting edge of an obsidian blade with the ragged cut of a serrated weapon.

While priests would use large pieces of obsidian to use as mirrors in the many rituals the culture practiced.

Even though the credit Mesoamerican cultures are granted for the use of obsidian, the first known archaeological evidence of obsidian usage was found in Kariandusi, Kenya, along with other Acheulian age – roughly 1.5 million years ago before present – sites that date back to 700,000 BC. Although very few objects have been found at these locations relative to the Neolithic age – between 10,000 and 4,500 BC – otherwise known as the final period of the Stone Age.

Manufacturing of obsidian bladelets at Lipari, near Sicily, had reached a high level of sophistication by the late Stone Age and were traded as far as the southern Po River valley in Italy and even Croatia.

Anatolian sources of obsidian are known to have been the material used in the Levant, or eastern Mediterranean, and modern-day Iraqi Kurdistan dating back to 12,500 BC. Furthermore, obsidian artifacts are fairly common at Tell Brak, one of the earliest Mesopotamian urban centers dating back to the late fifth millennium BC.

There is even extensive use of obsidian on Rapa Nui, or Easter Island, for edged tools such as Mataia and the pupils of the Moai – the famous Easter Island statues – as well as to inscribe the Rongorongo glyphs.

While those are some of the earliest accounts considered in modern history, evidence exists throughout Europe as well as in the Middle East and Asia.

In the west, as archaeological exploration began to delve into the vast lands of Native Americans, more modern researchers discovered tools used by northern Indigenous peoples of North America, leading to perhaps one of the largest trade systems of prehistory to rival that of even the Silk Road.

It has been said that the first mining efforts simply involved searching for rocks most appropriate for making tools. Primary stone tools have purportedly been dated back as far as 2.6 million years ago, predating even present Homo Sapiens.

As Homo Sapiens developed and the population grew, communities began to replace their nomadic lifestyle, with early tribes settling around primary food and water sources. Soon after, the location of other natural resources began to have an impact on human habitation.

But to reach a point where we can enjoy the comforts of modern living, millennia of adaptation and struggle were necessary, and utilizing the gifts of the Earth has continued to help us even unto today.

Since the discovery of a prominent obsidian source near the Indian River in 1969, numerous researchers have investigated obsidian use in prehistoric Alaska.

Batza Tena, as it is known in the local Koyukon dialect, has been suggested to be the primary archaeological obsidian source in Alaska, with further research identifying many other obsidian types associated with sources as far-reaching as the Yukon Territory and British Columbia, as well as an even more distant source in Siberia.

These efforts have illuminated evidence of an elaborate network of long-distance trade and cultural interaction throughout prehistoric North America and beyond.

Historical geological dating by the Royal BC Museum suggests that as far back as 10,000 years ago, the Tahltan First Nation mined and traded obsidian.

Anthropologists found that because the material occurs in a limited number of regions (i.e., near volcanoes), it was determined to be a valuable resource in reconstructing ancient trade networks. Artifacts that were crafted from obsidian were analyzed to show which quarry the raw material came from.

As a main source of obsidian in the northwestern part of British Columbia occurs at Mount Edziza above the Skeena River, carbon tracing determined that obsidian from this area found its way to Alaska and northern Alberta as early as 10,000 years ago.

Inter-community trade was very important to the Tahltan people; exchanging copper, eulachon oil, and shells brought from the coast by the Tlingit to camps situated between Telegraph Creek and the Tahltan River for the Tahltan's own leather goods, obsidian, and snowshoes.

"Mining has always been a part of our culture, both in the past and in present-day times. For thousands of years, our people prospected, mined, and utilized obsidian for tools, weaponry, and trade," said Tahltan Central Government President Chad Day. "More recently, Tahltans supported miners during the gold rush and have had operating mines in our homelands for multiple generations."

Obsidian is unique in a number of ways, but perhaps for those researching the trail of prehistory, its geological markers are the most remarkable. The black glass is formed in an instantaneous geologic event – basically the sudden cooling of volcanic lava – and because of this, individual sources exhibit homogenous signatures, determined by the relative abundance of trace elements such as strontium and zirconium from which the material is formed.

Each source has a unique "fingerprint" that, once identified, can be used to differentiate it from other distinct sources. For example, Batza Tena obsidian exhibits relatively low levels of strontium and zirconium, while the Okmok source found on the long stem of Alaska, known as the Aleutian Islands, has much higher values of both.

This analysis allows researchers to trace the material used to make an artifact back to the original geologic location where it was first acquired.

Through this method, researchers in Canada and Alaska have slowly been retracing the steps of these land's first people and putting together the pieces of both broken obsidian and old travel routes.

One of the most recent discoveries of the travels of obsidian, however, somehow turned up at the bottom of Lake Huron.

Obsidian use in eastern Canada and the United States was also significant. However, what is truly interesting about this discovery is where it originated.

Roughly 105 feet (32 meters) below Lake Huron, from a sample of sediment that was hand excavated, anthropologists found two ancient artifacts that dated back nearly 9,000 years ago.

"Obsidian from the far western United States is rarely found in the east," said Ashley Lemke, an anthropologist in the Department of Sociology and Anthropology at the University of Texas at Arlington. "These tiny obsidian artifacts reveal social connections across North America 9,000 years ago. The artifacts found below the Great Lakes comes from a geological source in Oregon, 4,000 km (2,485 miles) away – making it one of the longest distances recorded for obsidian artifacts in the world."

While modern uses for obsidian have stayed in the realm of artisanal or hobbyist craftsmanship, there are many people and cultures that still use obsidian just as their ancestors had centuries ago.

Much like the elements of innovation being utilized today, there may come a day when we revisit obsidian as a curio and discover that all along, it held some long slumbering secret, if not in its chemical makeup, then possibly in its natural formation. 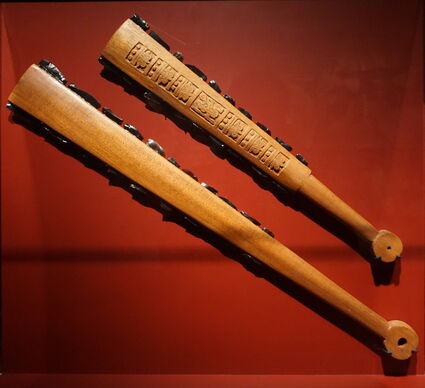 A recreation of an Aztec obsidian sword, a macuahuitl, made in 2019 by Jorge Bertin Nicolas Salazer based on drawings found in codices and Spanish descriptions.