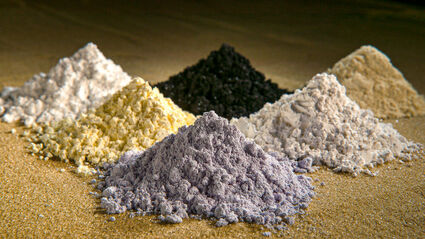 Nearly all 50 of the minerals and metals critical to the U.S. are found in Alaska, including the suite of rare earth elements. Clockwise from top center: praseodymium, cerium, lanthanum, neodymium, samarium, and gadolinium.

Russia's invasion of Ukraine, America's tenuous relationship with China, and global competition for the enormous volume of mined materials needed to build the envisioned clean energy future has elevated the urgency for the United States to bolster domestic critical mineral supply chains. For many, these geopolitical and economic realities have elevated the development of Alaska's incredible critical mineral resources to a national imperative.

The urgency of this matter is why leadership from the Biden administration, state government, academia, the mining sector, Alaska's congressional delegation, and representatives from Alaska Native corporations convened in the newly christened Joseph E. Usibelli Engineering Learning and Innovation Building on the University of Alaska Fairbanks campus for the Alaska's Minerals – A Strategic National Imperative summit.

During her Aug. 22 opening address, UAF President Pat Pitney compared the need to develop Alaska's rich critical mineral resources to previous national imperatives such as the Alaska Highway, built to protect America's interest in the Pacific theaters during World War II, or the Trans-Alaska Pipeline System, built to stave off oil shortages during the 1970s energy crisis.

"The time is now," she said, setting the tone for the two-day summit.

This sense of urgency, however, was juxtaposed against the reality that Alaska is challenged by a federal mine permitting system that takes nearly a decade to get through and some regulators within the Biden administration that would rather not see Alaska's resources developed, despite the 49th State's potential to provide the U.S. with a reliable and responsible source of the minerals and metals urgently needed to attain the White House's renewable energy and electric vehicle ambitions.

"Unfortunately, the only thing standing in our way many times is our own federal government," Alaska Gov. Mike Dunleavy said of feeding Alaska's critical minerals into U.S. supply chains during the second day of the summit.

While America's reliance on mineral imports has long been on the radar of Washington, D.C. policymakers, the rapid transition to low-carbon energy and the heating up of geopolitical tensions related to the Ukraine War and tensions between China and Taiwan have elevated the criticality of securing reliable sources of the mined commodities that go into manufacturing electric vehicles, solar panels, military equipment, and other goods vital to economic and national security.

Over the past five decades, the U.S. has become increasingly reliant on China and other nations for its supply of minerals and metals. According to the U.S. Geological Survey, America is more than 50% import reliant on 47 minerals, including 100% for 17 of them.

This heavy reliance on imports, primarily from China, comes at a time when global governments and automakers are racing to ensure they have the materials needed for the batteries and motors that will go into hundreds of millions of electric vehicles in the coming years.

This equates to five times more graphite, 20% more nickel, six times more cobalt, and seven times more lithium than was produced at every mine on Earth during 2021.

And each EV rolling off global assembly lines requires around 10 lb of rare earth magnets and more than double the copper needed for the internal combustion models they are supplanting.

This does not even account for the critical minerals needed to generate and store renewable energy; manufacture computers, smartphones, and other electronics; and support the global economy at large.

"The concentration of where that supply comes from makes our foreign dependence even more concerning," the senators penned in their letter. "China dominates the international critical mineral supply chain, presenting a dire national security threat for the United States, and harsh economic realities for American manufacturers."

Russia's invasion of Ukraine has elevated the harshness of these economic realities.

"Building out our domestic supply chain and reducing our reliance on Russia, China and other adversarial nations is more important than ever before," Manchin penned in a March statement.

Russia is a major supplier of many of the minerals critical to low-carbon energy ambitions and military readiness – antimony, nickel, uranium, and vanadium are high on this list.

In a June National Defense Authorization Act report, the U.S. House Armed Services Committee said it "is concerned about recent geopolitical dynamics with Russia and China and how that could accelerate supply chain disruptions."

Shortly following the letter from the senators, President Biden authorized use of the Defense Production Act to bolster American supplies of these critical battery minerals and materials.

"Specifically, the DPA will be authorized to support the production and processing of minerals and materials used for large capacity batteries – such as lithium, nickel, cobalt, graphite, and manganese – and the Department of Defense will implement this authority using strong environmental, labor, community, and tribal consultation standards," the White House penned in a March 31 briefing.

During a presentation at the Alaska's Minerals summit, Halimah Najieb-Locke, deputy assistant secretary of defense for industrial base resilience at the DoD, says $1 billion has been appropriated for the DPA Title III program, a Cold War-era tool to ensure the Pentagon has the ability to secure goods needed for national security.

Half of this DPA Title III funding is specifically for bolstering battery materials detailed in the executive order, and the other half is related to supporting Ukraine, which also ties into securing critical minerals.

"You are going to see our strategy play out in a way that is wholly beneficial to the mining industry at large," Najieb-Locke told the Alaska crowd.

She says the DPA authorizations are on top of the $7 billion that the U.S. Department of Energy is investing into expanding the domestic battery supply chains and the federally authorized budget of roughly $40 billion the DOE loan office has to support energy transition projects.

Najieb-Locke said the large sums of federal dollars available can bolster Alaska's quest to be a domestic supplier of critical minerals.

How richly endowed in critical minerals is Alaska?

From zinc and germanium produced at the Red Dog Mine in Northwest Alaska, to cobalt-enriched copper deposits in the Ambler Mining District, to America's largest graphite deposit on the Seward Peninsula, to the Bokan Mountain rare earths project on the Southeast Alaska Panhandle, and the thousands of deposits and prospects found between, America's 49th State hosts 49 of the 50 minerals and metals deemed critical to the U.S.

Interestingly, aluminum is the only commodity on the U.S. critical minerals list that has not been found in any appreciable quantities in Alaska.

Sen. Lisa Murkowski says that many of her colleagues in Washington, D.C. believe that the talk of Alaska's enormous critical minerals potential is hyperbole.

"Because Alaska is always the biggest, we always have more, we always have the tallest or the deepest, the widest or the bluest, and the fact of the matter is that we do," she said during the opening day of the Alaska's Minerals summit.

Federal geologists, however, believe Alaska's senior senator's superlatives when it comes to minerals, which is why they recently announced a $6.75 million investment into an expanded critical minerals exploration program there.

"All the way back to the days of the Gold Rush, Alaska has been famous for its mineral wealth. These new projects represent the next steps in understanding the mineral potential for commodities that are critical to our national economy and defense," said U.S. Geological Survey Director David Applegate.

The newly appointed USGS director told the delegates gathered for the Alaska's Minerals summit that the new programs being carried out under the USGS Earth Mapping Resources Initiative, or Earth MRI, will provide information crucial to narrowing the search for critical minerals across the vast, mineral-rich, and underexplored landscape that is Alaska.

"The Last Frontier remains a frontier for critical mineral resource development," he said.

While the Biden administration understands that its clean energy ambitions require enormous quantities of reliable and responsibly sourced critical minerals, and Alaska has vast potential to meet that demand, certain departments within the current White House, as well as previous administrations, have put up hurdles that thwart the development of The Last Frontier's rich mineral resources.

"We are challenged every single day," Murkowski said during the Alaska Mineral's summit. "They have not been able to knock Alaska out of the game. Why? Because the resource is too great and because we have figured out how to innovate and lead in so many ways when it comes to accessing the resources."

While Alaska remains in the game, it is being penalized by a nearly decade-long process to gain federal permits to build a mine.

This could change when Congress reconvenes in September.

In order to get Manchin to cast his key vote in favor of the Inflation Reduction Act, Democrat leadership in the Senate agreed to take up mining permitting reform legislation by October.

Murkowski told attendees of the Alaska's Minerals summit that she has seen a very early draft of the proposed legislation and believes that for some of her colleagues in Washington, D.C. "it is going to be a really, really tough pill to swallow because it will actually make a difference" when it comes to permitting large projects such as mines and renewable energy developments.

Given the implications beyond mining and into the realm of green energy, Alaska's senior senator said the need for large project permitting reform in the U.S. is much more widely recognized by policymakers on both sides of the aisle in Washington D.C., which could make the mining side of permitting reform a bit easier to swallow.

The current transition to EVs charged with zero-carbon electricity and the massive volume of mined materials needed to build that clean energy future have created a conundrum for conservation groups that often oppose domestic mining – they must support domestic production of the minerals and metals needed for the green energy future, rely on imports from countries with little to no environmental or human rights standards, or slow the arrival of the low-carbon future due to the lack of minerals and metals.

Often a fourth solution is presented by conservationists – lean on increased recycling to supply the materials.

While recycling needs to be part of the conversation, both for helping in the near term and providing a larger quantity of materials as the first generations of EVs reach the end of their useable life, this solution does not account for the fact that there are not enough metals available for recycling.

"I am not a scientist but I kind of get that in order to recycle something you have to cycle it first," Sen. Murkowski quipped during the Alaska's Minerals summit.

Many attendees argued that developing critical minerals in Alaska – a state that operates under U.S. environmental laws and has a world-class aboriginal land claims settlement – provides the best solution when it comes to producing the needed mined materials under the highest environmental, social and governance standards.

"There is a lot of talk about ESG nowadays, but Alaska has been doing ESG before ESG was a thing," Dunleavy said.

Dowa Metals and Mining Alaska Vice President Liz Cornejo may have put it best with her thought-provoking question, "What is the impact of not mining in Alaska?"

A query that lies at the crux of the conversation as leaders at the state and national level continue to formulate a strategy that builds upon ideas that came out of Alaska's Minerals – A Strategic National Imperative.

UAF, which hosted the summit, is currently planning follow-up meetings in Alaska and Washington, D.C. 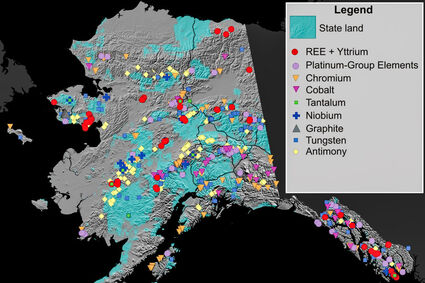