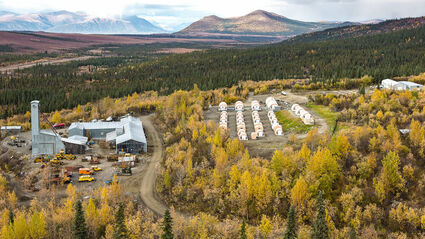 The White House's bold clean energy ambitions, which are intricately linked to the availability of reliable supplies of the metals needed to build electric vehicles and renewable energy infrastructure, are being slowed by a tug-o-war between departments within the Biden administration.

While the departments of Commerce, Defense, and Energy are forging ahead with programs and investments aimed at ensuring America has the minerals and metals needed to support the clean energy objectives outlined by the White House, and enabled by the Bipartisan Infrastructure Law and Inflation Reduction Act, DOI is pumping the breaks on a domestic project that would produce the requisite raw materials.

The Interior Department's yanking of the permits to build a road that would connect the rich deposits of cobalt, copper, zinc, and other metals in Alaska's Ambler Mining District to markets demanding sustainable supplies of these mined materials underscores a disconnect within the Biden administration.

"They want to have this domestic supply of strategic and critical minerals, yet one department in the executive branch is doing everything it can to frustrate the development of those strategic and critical minerals that are so important to them realizing the policy priorities that they are trying to achieve," Kyle Parker, a partner at the national law firm Holland & Hart told Mining News.

President Biden has repeatedly touted his administration's goals to bolster domestic supply chains for the materials needed to power clean energy manufacturing and clean energy jobs in the United States.

"When it comes to clean energy, China has spent years cornering the market on many of the materials that power the technologies that we rely on," he said during a February roundtable discussion on critical minerals. "That's why I committed us to build a clean energy supply chain stamped 'Made in America'."

On the same day the President was touting the need to expand critical mineral production on American soil, however, DOI announced that it had filed a motion to remand previously issued permits to build a road needed to deliver metals mined in Alaska's Ambler District into the nation's supply chains.

For Alaska Gov. Mike Dunleavy, DOI's pulling of the Ambler Road permits for further review at a time when the departments of Commerce, Defense, and Energy are pushing forward the White House's American critical minerals agenda demonstrates exasperating counterefforts within the Biden administration.

With the passage of the Inflation Reduction Act, this frustration has spread to the automotive sector.

Signed into law by President Biden on Aug. 16, this $750 billion piece of legislation includes a $7,500 EV tax credit that is tied to domestically produced critical battery materials. This starts at 40% in 2023 and rises 10% each year until 2027, at which point it will remain steady at 80%.

Additionally, EVs with battery components or critical minerals supplied by "foreign entities of concern" will be ineligible for the tax credit starting in 2024 and 2025, respectively. This takes companies in China, the primary global supplier of battery materials and other critical minerals, off the table.

Given the long lead times to permit and build mines and mineral processing facilities in the U.S. under ideal circumstances, American automakers are concerned that such a dramatic increase in domestically sourced battery materials and critical minerals will make the tax credit eligibility impossible to achieve.

Parker told Mining News that auto manufacturers that Holland & Hart have been working with "are extraordinarily frustrated" that the administration does not understand the gap between the domestic material component of the tax credit eligibility requirements in the Inflation Reduction Act and the time it takes to get a mine in production in the U.S.

A streamlined mine permitting process that reduces the current timeline of nearly a decade to the two- to three-year mine permitting windows in Canada and Australia, countries with strong environmental protections, could help alleviate the frustrations felt by American automakers and mining companies alike.

Such permitting reform will be taken up by U.S. lawmakers when Congress reconvenes in September, thanks to Joe Manchin, D-West Virginia.

With Senate Democrats needing Manchin's vote to pass the Inflation Reduction Act, the West Virginia senator negotiated a deal to take up mine permitting reform by October if he voted in favor of this key piece of legislation for the party.

Sen. Lisa Murkowski, R-Alaska, told attendees of the Alaska's Minerals summit that she has seen a very early draft of the proposed permit legislation, and for some of her colleagues on Capitol Hill, "it is going to be a really, really tough pill to swallow because it will actually make a difference" when it comes to permitting large projects such as mines and renewable energy developments.

Alaska's senior senator said an increasing number of lawmakers on both sides of the aisle understand the need for large project permitting reform in America. It is, however, currently unclear whether enough of them will be willing to swallow the pill to get such a permitting reform bill passed.

Standing up to DOI

Parker believes there is a quicker and more politically expedient way to ramp up domestic critical minerals supplies in a timeframe that meets the Inflation Reduction Act critical mineral policies – end the tug-of-war between DOI and the departments working toward the Biden White House's climate goals.

He suggests that the Pentagon, departments of Commerce and Energy, along with the White House, should press the Interior Department to get behind the objective of domestically producing the minerals and metals critical to national security and a clean energy future.

"It doesn't take a statutory fix to get this done," Parker told Mining News. "What it really takes is the Biden administration to get a backbone and stand up to the constituencies that are pressuring from an environmental side to delay all these projects that are supposedly a policy priority."

Sen. Dan Sullivan, R-Alaska, agrees and is pressuring the Pentagon to take the Ambler Road remand up with DOI.

This pressure began in July when the senator announced that he is placing a hold on the nominations of three senior DOD nominees until he gets some answers on why the DOI pulled the Ambler Road permits.

"I haven't been able to get answers from anybody in the Pentagon or at the Department of the Interior," the Alaska senator penned in a July 29 statement. "Therefore, while I believe these nominees are well qualified, I'm putting a hold on their nominations until I get answers."

As of Aug. 22, Sullivan had still not received the answers he seeks.

"We are not moving these nominees until we get answers on Ambler," he told the attendees of the Alaska's Minerals summit.

More information on Sen. Sullivan's hold on the DOD nominees can be read at Sen. Sullivan halts Defense nominees in the August 3 edition of Metal Tech News. 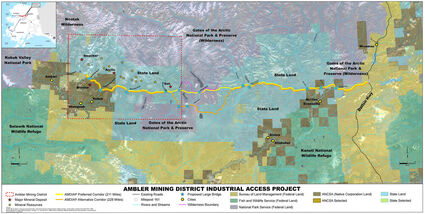 In the meantime, DOI has made little apparent progress on the remanded Ambler Road permits and has not put forward any timeline for completing its review – keeping its foot firmly pressed on a project that could deliver cobalt, copper, and zinc critical to building "a clean energy supply chain stamped 'Made in America.'"