Gallium may be more critical than realized 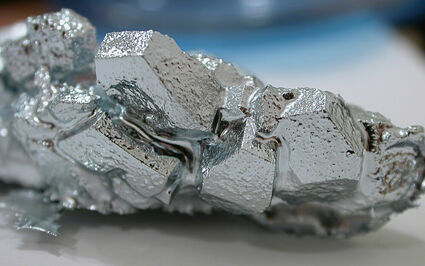 From making smartphones smarter to transforming troublesome carbon dioxide into useful oxygen and high-value carbon products for batteries and other advanced products, gallium is an amazing tech metal lending its incredible qualities to high-performance computers, telecommunications, national security, and the environment.

A soft silvery metal that will turn to liquid in the palm of your hand due to its 85.6-degree-Fahrenheit melting point, gallium is the primary ingredient in two semiconductors, gallium arsenide and gallium nitride, used in next-generation smartphones, telecommunication networks, light-emitting diodes (LEDs), thin-film solar cells, and medical devices.

"The development of gallium arsenide as a direct band-gap semiconductor in the 1960s led to what are now some of the most well-known uses of gallium – in feature-rich, application-intensive, third- and fourth-generation smartphones and in data-centric networks," the U.S. Geological Survey penned in a report on minerals and metals considered critical to the United States.

Gallium nitride is used principally in the manufacture of LEDs and laser diodes, power electronics, and radio-frequency electronics. Considered superior to traditional semiconductors, Gallium nitride is increasingly being used for the integrated circuits going into faster and more reliable telecommunications devices, servers, laptop adapters, and even onboard chargers for electric vehicles.

The advent of 5G-capable telecommunication networks is pushing demand for this tech metal even higher.

"Owing to their large power-handling capabilities, high-switching frequencies, and higher voltage capabilities, GaN-based products, which historically have been used in defense applications, are used in fifth-generation (5G) networks, cable television transmission, commercial wireless infrastructure, power electronics, and satellite markets," according to the USGS.

Growing demand is pushing the price of this semiconductor metal higher.

Most of the gallium used by America's high-tech sectors originates in China, which accounted for 98% of 420,000 kilograms of this tech metal produced worldwide in 2021. Most of the rest originated in Russia, the world's second-largest gallium producer last year.

While America's technology and renewable energy sectors do not need an enormous amount of gallium, USGS estimates that 16,000 kilograms were used in the U.S. last year; it is completely reliant on imports for this critical tech metal.

If making smartphones smarter and telecommunication systems faster was not enough to elevate gallium's criticality, two new discoveries show this liquid metal is great at scrubbing carbon dioxide from the atmosphere.

An international team of scientists led by Professor Kourosh Kalantar-Zadeh at the University of New South Wales School of Chemical Engineering in Australia has developed a reactor that uses gallium and nano-sized silver rods to break down CO2 into its constituent elements.

"Our liquid metal technology offers an unprecedent[ed] process for capturing and converting CO2 at an exceptionally competitive cost," said Kalantar-Zadeh. "We are very hopeful that this technology will emerge as the cornerstone of processes that will be internationally employed for mitigating the impact of greenhouse emissions."

The reactor generates tribo-electrochemical reactions, the process of using an electrical current to transfer electrons from a liquid onto a sold surface, to create oxygen gas and sheets of solid carbon that accumulate on the gallium.

In a paper detailing this technology, the researchers estimate that it will cost about $100 per metric ton to convert a metric ton of CO2 into oxygen and carbon.

Toward this objective, a startup company called LM Plus was created with the support of UNSW's Knowledge Exchange and seed investment from Uniseed.

LM Plus director and Uniseed investment manager Paul Butler said that in addition to the obvious value of scrubbing CO2 from industrial emissions prior to release into the atmosphere, carbon sheets produced by the technology can be used to make electrodes in batteries or carbon fiber materials for high-performance products like aircraft, racing cars, and luxury vehicles.

"What we are working towards now is to raise funds to build a larger size proof-of-concept for this system to work within a 40-foot container – the size of a truck trailer – that could ultimately help industrial sites immediately capture any CO2 emissions and convert them," Butler said.

Another Australian research team found that adding just a pinch of platinum to gallium created a liquid-metal catalyst that is better at scrubbing carbon emissions than solid-state platinum.

"From 2011, scientists were able to miniaturize catalyst systems down to the atomic level of the active metals," said lead author Arifur Rahim of UNSW. "To keep the single atoms separated from each other, the conventional systems require solid matrices to stabilize them. I thought, why not use a liquid matrix instead and see what happens."

The team found that platinum becomes soluble in liquid gallium.

For this mechanism, processing at an elevated temperature is only required at the initial stage, when platinum is dissolved in gallium to create the catalysis system. Despite this initial firing, roughly five times less heat is required for roughly an hour or so to produce the liquified platinum that remains a liquid at room temperatures.

Even more remarkably, at a ratio of less than 0.0001 platinum to gallium, this new liquid-metal alloy is 1,000 times more efficient than a solid-state catalyst with around 10% platinum.

The liquidity of the gallium-platinum alloy offers yet one more advantage – it is self-cleaning.

Like a water feature with a built-in fountain, the liquid mechanism constantly refreshes itself, self-regulating its effectiveness over time and avoiding the catalytic equivalent of pond scum building up on the surface.

As it turns out, platinum lends its catalytic abilities to gallium, which is the driving force behind the reaction.

"The platinum is actually a little bit below the surface and it's activating the gallium atoms around it," said Andrew Christofferson, an Exciton Science associate investigator that worked on the project. "So, the magic is happening on the gallium under the influence of the platinum. But without the platinum there, it doesn't happen. This is completely different from any other catalysis anyone has shown, that I'm aware of."

These magical gallium properties could make the liquid metal a critical element in lowering atmospheric CO2.

The gallium needed for traditional high-tech and potential new green applications is typically recovered as a byproduct of mining more common metals – primarily aluminum and zinc.

While there are gallium-enriched base metal deposits in both the U.S. and Canada, two North American rare earths deposits – Round Top in Texas and Alces Lake in Saskatchewan – host richer stores of this critical metal.

Being advanced under a joint venture between USA Rare Earth LLC (80%) and Texas Mineral Resources Corp. (20%), the Round Top rare earths project in Texas is rich in a suite of critical minerals, including gallium.

According to a 2020 assessment by USGS, the Round Top deposit hosts a staggering 36.5 million kg of gallium, or roughly equivalent to 850 years of global needs based on 2021 production.

This enormous lode of gallium, however, is in low concentrations in a very large deposit.

The technology being developed to recover the rare earths mined from Round Top has also been designed to extract and purify the lithium, hafnium, zirconium, gallium, and beryllium also found in the critical Texas deposit.

"This new plant will process leach solutions from the Round Top ore using continuous ion exchange and continuous ion chromatography (CIX-CIC) to separate and purify up to a total of 26 different recoverable elements," according to USA Rare Earth.

While not as large or advanced as Round Top, Appia Rare Earths & Uranium Corp.'s Alces Lake rare earths project in northern Saskatchewan may host the highest-grade gallium deposit in North America.

An electron microprobe study conducted by the Saskatchewan Research Council first demonstrated that the rare earths-enriched monazite mineral from two separate zones and trends at Alces Lake was also enriched with gallium.

Drilling carried out over the past two years has further confirmed the high-grade nature of the rare earths and gallium in these zones. Highlights from this drilling include: 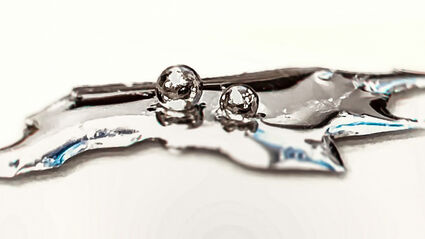 The gallium grades are economically significant.

By way of example, it is estimated that the ore at Apex Mine in Utah, which was the only primary mined source of gallium and germanium in the U.S. before it was closed in 2011, averaged about 0.032% gallium.

Considering the findings of the two studies out of Australia, these advanced technological applications could soon extend to lowering the amount of greenhouse gases in the atmosphere.