Rare earths 101 – a crisis of identity

Getting to know each element is key to understanding markets Critical Minerals Alliances 2022 - September 12, 2022 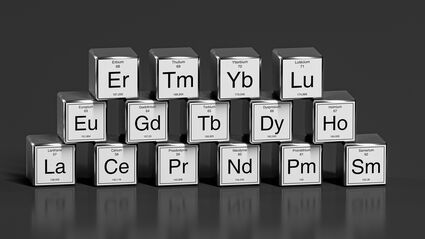 Rare earths consist of a group of 15 lanthanide elements that make up the second from bottom row on the periodic table.

Rare earth elements suffer from a crisis of identity. Often referred to and treated as one commodity, REEs are actually a group of 15 elements – each with its own individual and seemingly magical qualities.

"There are literally hundreds of uses for rare earths – they are unique materials, almost alchemistical magic," said Michael Silver, CEO of American Elements, a Los Angeles-based distributor of rare earths and thousands of other advanced materials.

"Because of their unusual physical and chemical properties, the REEs have diverse defense, energy, industrial, and military technology applications," the U.S. Geological Survey wrote in a 2018 report on minerals and metals critical to America's economic and national security.

Some of these alchemistic-like elements are responsible for the brilliant colors on televisions, computer monitors, and smartphone screens; others go into the powerful magnets that allow high-fidelity speakers that are small enough to fit into your ear, electric cars that travel further on a charge, and efficient wind turbines; a few are used to boost fiber optic signals that make the internet faster; one rare earth is responsible for the world's most accurate atomic clock; a couple more are used for portable X-ray machines that do not need electricity; others are used in a device that turns any flat surface into a speaker; and this growing list goes on.

It is not rare earths in general, however, that make these modern wonders possible. Instead, each individual element – except for promethium, which is extremely rare in nature – lends its own special qualities to marvels of our modern world.

Rare earth elements could be thought of as a spice rack for modern high-tech, green energy, and military technologies. Instead of 11 secret herbs and spices for finger-licking good chicken, this rack has 15 elements that have helped to upgrade the black and white TV sets of the 1960s to ultra-high-definition flat screens capable of streaming Netflix in more than 1 billion colors.

And just like spices, each individual rare earth brings its own zest to modern devices. While a pinch of dysprosium ensures powerful permanent magnets stay magnetized in high-heat situations, for example, it is a poor substitute for making the terbium green, which is one-third of the trichromatic lighting tech trifecta.

So, while rare earths are the spice rack of modern technologies, understanding the flavor of each rare earth will help demystify this group and allow each element to exercise its individuality – an understanding that is becoming increasingly important as the green energy transition spices up magnets used in EVs and wind turbines with rare earths, while leaving the rest of this group of elements on the rack to collect dust.

"The fact that different REE are co-produced while the markets for them are diverging means that some are scarce while others are oversupplied. This divergence will grow in the coming years," the International Renewable Energy Agency inked in a 2022 report on rare earths.

"It is critical to understand individual REE, instead of dealing with them as a group," IRENA added.

Learn more about each of the rare earths at Rare earth elements and how they are used in Critical Minerals Alliances 2022.

To be fair, there are good reasons that rare earths lack individuality – these lanthanide elements are so chemically similar that they are grouped together and given their own individual line near the bottom of the periodic table; they hang out together in nature – where you find an economic deposit of one, the 13 other stable rare earths are always present in some quantity; and they were given such hard-to-pronounce names that it is just easier to call them by their family title.

Adding to their individuality crises, an en vogue media trend to refer to any of the less abundant critical minerals and metals as "rare earths" adds an extra layer of befuddlement that is akin to calling dairy products spices – they do add flavor to recipes (especially butter), but they do not belong on the spice rack.

The primary reason rare earths are considered a group instead of individuals is their geological affinity, and when you mine one, you mine them all. There are no lanthanum, praseodymium, or ytterbium mines – just rare earth mines.

Each deposit has its own unique ratio of each of the 14 stable rare earths, but any given REE orebody has at least some of all of them. Considering that each individual rare earth has its own price driven by supply and demand – for example, at mid-year lanthanum oxide was selling for about US$1.45 per kilogram while terbium oxide was fetching a whopping US$3,500/kg – the value of an REE deposit is determined by how much of each element is present.

And the flavors of the day are the rare earths used in the magnets going into EVs, wind turbines, and high-tech devices – praseodymium, neodymium, samarium, gadolinium, terbium, dysprosium, and holmium. So, a mine that produces high quantities of these elements is much more valuable than one that is more enriched with cerium, lanthanum, and thulium.

A mine more enriched in the more sought-after magnet rare earths is also putting smaller quantities of the lesser-used REEs on the rack to collect dust.

In reality, the less popular REEs often do not even make it to the spice rack. Instead, mining and separation projects often toss the less sought-after rare earths in a bargain bin of mixed REEs after the more cherished elements are pulled out.

Adding further to rare earths' lack of individuality is their affinity for one another, which makes them notoriously difficult to separate.

Much like fraternal twins, the 14 stable rare earths may look and act differently but have some undeniable similarities. A key likeness is the outermost electron shell of all the REEs are identical; this is why they are always found together geologically and difficult to separate into individual elements once mined.

To separate the tightly bonded rare earths into the individual elements that spice up technologies, an arduous process called solvent extraction was invented.

The basic idea behind solvent extraction, which has served as the standard for separating REEs for the past 60 years, is a mixed rare earth product is bathed in vats of various solvents that progressively separate the notoriously interlocked rare earths into individual elements – a long process that requires dozens of steps and a relatively large environmental footprint.

Rare earths can be thought of like spices, with each individual element adding its own zest to a wide array of household, high-tech, and green energy goods.

The real trick to ensuring there are plenty of rare earths to meet global demand is not in finding REE deposits; they really are not as rare as their name suggests, but in developing environmentally sound processes to separate the group into the individual elements that spice up modern technologies.

From the millions of dollars being invested by the U.S. government to more modest investments by small-cap mining companies seeking the most value from their REE deposits, the quest for a superior rare earth separation tech has drawn a lot of attention.