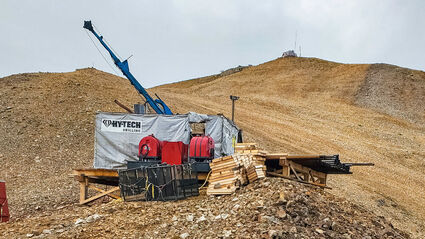 A drill tests the DC prospect during HighGold's 2021 program at the Johnson Tract gold project in Alaska.

When you calculate the value of all the metals into gold equivalency, this comes to 1.05 million oz of indicated resource averaging 9.39 g/t gold-equivalent.

Discovery drilling completed late in the 2021 season, however, indicates that the DC prospect area about 2.5 miles north of JT could be the higher-grade and potentially larger prize at Johnson Tract.

Geological modeling carried out during the winter months indicated this bonanza-grade gold is associated with an east-west striking trend of steeply dipping mineralization named after the late Bill Ellis.

"This emerging new zone of high-grade mineralization has been named the Ellis Zone in honor of the late Bill T. Ellis, who played a key role in the initial discovery and advancement of the Johnson Tract project and was a major force in the Alaska exploration community," said HighGold Mining CEO Darwin Green.

An account of Ellis' life and nearly half a century of exploring Alaska's mineral potential can be read at Bill Ellis blazed trail of Alaska discovery in the March 25, 2022 edition of North of 60 Mining News.

To follow up on the bonanza gold tapped last year at Ellis Zone, HighGold began its 2022 drill program with shallow-step out holes along strike to the east, west and down-dip from hole DC22-010.

"A priority of our 2022 drill program was to follow up on last year's late season discovery at the DC prospect to determine if the mineralization continued to depth and laterally along strike," said Green. "This has been confirmed in our initial step-outs, which have returned multiple intersections of high-grade mineralization, including subintervals of multi-ounce grade."

Highlights from the first eight holes drilled this year at Ellis Zone include:

"We look forward to receiving the balance of the assays from the initial 25-hole detailed grid drilling program and completing additional larger step-outs along strike and to depth," said Green.

Focused on Ellis into fall

HighGold says Ellis Zone will be a primary target as drilling at Johnson Tract extends into fall.

As of the end of August, the company had completed 5,397 meters of drilling during the 2022 season at the Southcentral Alaska gold property. Of the 36 holes completed, 28 were drilled at the DC prospect, six at the associated Milkbone prospect, one at the Kona prospect, and one in the JT Deposit area.

HighGold plans to complete at least another 5,000 meters of drilling with two rigs turning in September and October.

The company had originally planned to complete 13,000 meters of drilling this year at Johnson Tract but got a late start to 2022 drilling due to a heavy snowpack in the spring. The company now estimates that it will be able to complete 10,000 to 11,000 meters at the Alaska gold property this year.

For the balance of the season, one rig will remain dedicated to expanding Ellis Zone for the rest of the drill season, while the other drill rig will test important resource growth targets at the main JT Deposit. 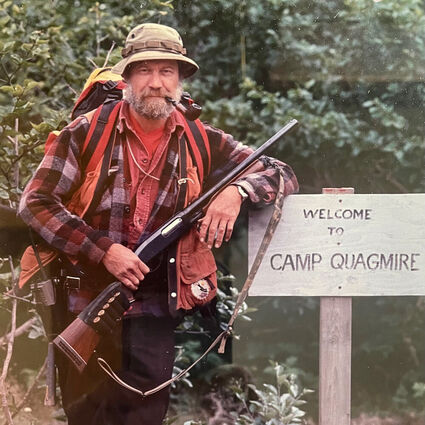 "We anticipate drilling through to the end of October as we continue to grow, what is shaping up to be a potentially significant new zone at the Johnson Tract project," said Green.