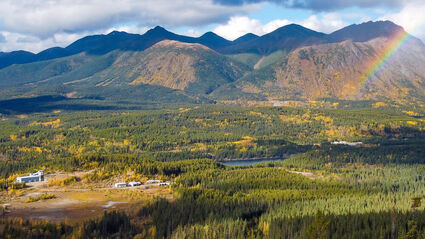 A rainbow touches down near the past-producing Taurus gold mine on the Cassiar property in Northern British Columbia.

At the onset of the roughly 20,000-meter 2022 drill program, which got underway in June, the Taurus deposit hosted 37.9 million metric tons of inferred resource averaging 1.14 grams per metric ton (1.39 million oz) gold.

This deposit lies west of the historical Taurus Mine, which produced 35,000 oz of gold from ore averaging 3.5 g/t gold during operation in the 1980s.

The first batch of assay results from Cassiar's 2022 drill program is from six holes drilled along the Decline fault, which runs north-south through the past producing mine, and one hole drilled about halfway between the Taurus mine and resource.

Highlights from these six holes drilled along the Decline fault in the Taurus East expansion area include:

Hole 22TA-145, drilled from a pad north of the historical mine, represented the northernmost hole to test for Taurus East mineralization along the Decline fault.

Hole 22TA-143, which tested the Decline fault about 900 meters south of 22TA-145, was the southernmost hole to test this structure that is a potential feeder to broader zones of mineralization in the Taurus East area. All five holes with results highlighted above were drilled north (holes 142 and 145) and south (holes 143, 144, and 146) of the Taurus Mine.

Results from an additional three holes drilled in the Taurus East expansion are pending. 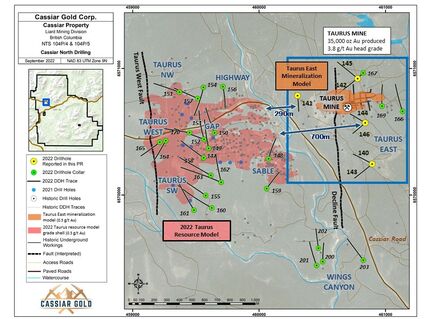 Drilling at Cassiar is slated to extend into October, and the company anticipates the program will exceed the 20,000 meters originally planned for 2022.