It's a very topsy-turvy world out there 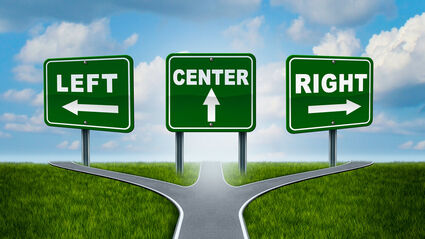 Politically, the United States has been on a long slow drift to the left ever since Franklin Roosevelt threatened to expand the Supreme Court in 1937 in order to get his progressive agenda back on track.

Through a cascade of political divisions, from the attack on Pearl Harbor to the abandonment of Kabul, the left-right divisions of the electorate have divided the country; but the ship of state has consistently incrementally edged forward, veering slightly to port.

Innumerable legislative initiatives expanding the administrative state have incessantly surfaced. They fill our lives with Big-Brother oversight in every direction, with more and better ideas waiting in the wings.

It is noteworthy at this point to strive for the 30,000-foot view, because it seems that there is a substantive change afoot.

Alaskans, of course, have always been the dog's tail when it comes to framing national policy. Nonetheless, the laundry list of the politicos Alaska has sent to Congress has been and continues to be impressive.

How the national elections will turn out this season remains to be seen, but either way, Alaska's delegation will be near the top of the heap. This is important in this time of change.

COVID-19 crippled the world. The domestic management of the pandemic was worrisome, and the loss of lives has been tragic. But, as that episode fades into the rear-view mirror, we are emerging into a new world marked by global recession and a virtually bullet-proof economy.

The international news discloses a drift away from fundamental progressivism. From Italy to Brazil, voters are trying to make their homelands "Great Again." Hungary and Turkey are reviewing their national policies. Women are marching in the streets of Tehran. China, it seems, is on the brink of economic implosion. Russia's Putin has lost his marbles.

Here at home, the Trump fandango has left its mark and lost its way. Would-be seditionists are standing in line to wait their turn in prison, and succession-deniers are wasting their time and money pursuing a lost cause.

The legacy of the Trump term in the White House is a Supreme Court that is committed to reviewing the record and unwinding some of the damage that has brought us to the wonderful world of a strong central government.

If, as may be expected, SCOTUS unlays many of the "accomplishments" of the past several decades, there is a new sunrise just beyond the horizon.

The political shift in the country has been a long time coming. It wasn't all that long ago that the stuffed shirts of the Republican party represented the educated and the affluent, who knew a better way and who lined the pockets of those who played their game. But that has changed. The Democrat party, over time, has been infiltrated by the best and the brightest, not to mention some of America's richest.

First, the Democrat party sloughed off its Blue Dogs, relegating them to the Republican big tent. Then it declined to serve the organized workers of the world, who thought they had bought and paid for reliable support when trying to stifle cold-hearted capitalists. Now, finally, they have turned out the common man and woman to fend for themselves through veiled promises of imaginary goals.

America's might has always depended on its economic insight. Few things in this world are created by smart people alone. It is the loggers and the fishermen and the farmers and the miners who bring the food and fuel and toys and buildings to the marketplace.

Only then can the engineers and the scientists and the tradesmen work their magic.

This sturdy foundation of providers and artisans has, in turn, supported a universe of bankers and professors and entrepreneurs. It is the strongest economic foundation the world has ever seen.

It is this economic foundation, however, that will protect us all as the currents of political change push the country toward a more central course.

The incumbent President is caught in the web of conflicting priorities. Because of the Ukrainian incursion, Russian hydrocarbons – foreseeably needed to keep Europeans warm during the coming winter – will be virtually unavailable.

America, of course, cannot put its limitless reserves of oil and gas and coal on rescue ships because – as everyone knows – hydrocarbons cause the Antarctic ice shelf to melt, resulting in hurricanes and typhoons. Accordingly, Europe will have to get its energy from other sources, like Saudi Arabia.

In the long run, although we will have to suffer through a maze of recession and restructuring, we will come out, in due course, ahead of the game.

The new left will compromise its lofty ideals; the new right will become the gadfly for the foreseeable future. National policy will harmonize its inherent conflicts, and the phoenix (not the Arizona one, the other one) shall rise again.