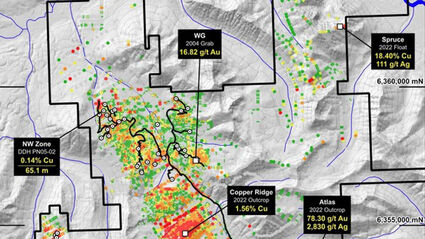 ATAC Resources Ltd. Oct. 12 announced that the results of its initial phase of surface exploration at PIL has turned up some of the highest-grade copper ever discovered on this property in the heart of British Columbia's Toodoggone district.

The first phase of exploration at PIL included prospecting, mapping, hyperspectral alteration sampling, soil sampling, and induced polarization (IP) geophysical surveys. A total of 295 rock samples and 589 soil samples were collected and sent for assay, and ten line kilometers of IP were completed at Spruce, PIL South, and the Copper Ridge targets.

"This initial program at PIL has defined a number of priority targets for follow-up work," said ATAC Resources President and CEO Graham Downs. "Sampling at Spruce returned the highest copper grades ever collected on the property."

Spruce is an outlying target found at the northern end of the 151.5-square-kilometer (58.5 square miles) PIL property.

While the nature and extent of mineralization at Spruce is not yet fully understood, follow-up work will be conducted in future seasons to characterize the target.

The ATAC exploration team also collected high-grade gold and silver samples from the Atlas target in the southern half of the PIL property.

Extensive surface alteration and gold-silver anomalism in soils and rocks are present across this zone, which presents a large and compelling target area for epithermal gold-silver exploration.

"PIL South has an extensive copper-in-soil response that is now coupled with strong copper mineralization in outcrop samples," added Downs.

PIL South is a priority target that received additional prospecting and mapping during a second phase of the 2022 work program, with 83 additional rock samples collected and pending assays.

In addition to those high-priority target areas, sampling was also conducted at Copper Cliff and Copper Ridge, with sampling at the former identifying copper mineralization across 50 meters of outcrop – individual grab samples returning 2.23%, 1.81%, and 1.25% copper – and exploration at the latter has yet to explain the extensive copper-gold-molybdenum soil anomaly observed at surface.

However, prospecting in the main anomaly did return 1.56% copper from a narrow outcrop exposure in the center of the anomaly, but it did not identify more extensive mineralization.

"We're very pleased with our initial work at PIL and anticipate receiving a 3-year Notice of Work later this fall, which will allow us to ramp up work to drilling in future seasons," finished Downs.